US sanctions may block China's ZTE from Android OS 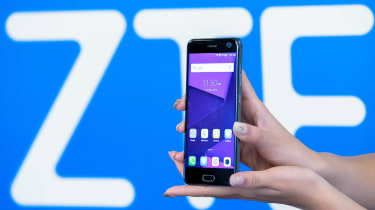 Chinese smartphone manufacturers could face ruination after the introduction of new US sanctions that US companies from buying goods from providers deemed to pose a risk to national security.

The US Commerce Department announced earlier this week that it would be barring US technology companies from selling parts to Chinese manufacturer ZTE after the company admitted to having secretly orchestrated deals with Iran, a country currently under US sanctions.

However, under additional rules announced on Tuesday, US firms will also be restricted from buying goods from companies that may pose a risk to national security and US telecoms providers.

It's the latest move in an ongoing trade dispute between the two economic superpowers that has already seen the introduction of substantial tariffs, and threats of a potential trade war.

The decision effectively shuts out ZTE, as well as rival Chinese smartphone manufacturer Huawei, from operating within the US market.

The National Cyber Security Centre here in the UK has expressed similar concerns about Chinese state-owned ZTE and has warned telecommunications companies against doing deals with the company.

"NCSC assess that the national security risks arising from the use of ZTE equipment or services within the context of the existing UK telecommunications infrastructure cannot be mitigated," said Dr Ian Levy, technical director of the NCSC.

To make matters worse, it's possible that Google's Android operating system falls under the US sanctions levied against ZTE, potentially cutting off the company from principal software used in its smartphones.

ZTE lawyers are reportedly meeting with Google executives to discuss the issue, according to a source familiar with the matter, speaking to Bloomberg. The source also indicated the company is looking at different software options in the event it's denied access to Android.

It's believed that the wider sanctions could prove particularly disastrous for ZTE, which currently sources as much as 30% of its parts from US technology companies, such as semiconductor giant Qualcomm.

However, while Tuesday's restrictions do not specify which companies pose a risk to national security, it's likely that Huawei, ZTE's rival in China, will also be affected.

Huawei has taken a bullish stance in response, as the company is reportedly preparing to cut its losses and ditch the US market outright, according to a report by the New York Times. Five US C-level employees have been laid off, including vice president and lobbyist William Plummer, an anonymous source indicated.

"Some things cannot change their course according to our wishes," said Huawei's deputy chairman Eric Xu, cited by the NYT. "With some things, when you let them go, you actually feel more at ease."

IT Pro has contacted Huawei and ZTE for confirmation of its actions.

While Huawei may be able to recover, ZTE is far more reliant on US tech. There are simply too few alternatives to Google's Android, particularly given Microsoft's decision to abandon development on its own operating system. In order to survive, it's possible the company will need to sink substantial investment into the development of its own software.