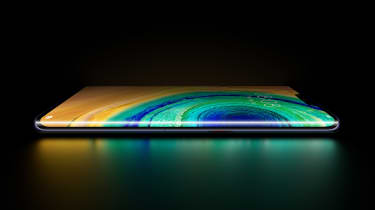 Huawei has launched the Mate 30 and Mate 30 Pro without Google Play Services at an event in Munich, Germany.

The Chinese smartphone giant has unveiled 4G and 5G versions of both models, but they're predicted to struggle in Europe without supporting Google's apps.

Due to the on-going trade ban placed upon it by Donald Trump's administration, Huawei can use Android 10, but it's a version that comes without the native apps or services, meaning it can't bundle in the Play Store, or YouTube and other popular services.

"We cannot use the Google Mobile Services core, we can use the Huawei Mobile Services (HMS) core," explained Richard Yu, CEO of Huawei Consumer Business Group. "Today that's because of a US ban that these phones cannot preinstall the GMS core, it has forced us to use the HMS Core running the Huawei app gallery on the Mate 30 series phones"

Two models were launched at the event, the Mate 30 and the Mate 30 Pro, with both available in 5G and 4G.

The Mate 30 has a 6.62in OLED Horizon display, with an aspect ratio of 18.4:9, which curves round along the edges at an 88-degree angle. This has taken the space usually provided for volume buttons, replacing them with virtual keys. As with the P-Series, the Mate 30 will also have facial recognition and an in-screen fingerprint sensor. There's also a Kirin 990 5G chipset under the hood, matched with a 4,200mAh battery. Fitted around these parts are 21 antennas, with 14 of those for 5G. 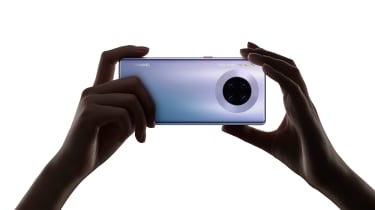 Camera-wise, the trusted Leica partnership is still producing top specs, but this time with a circular window to house them in, called a 'Halo Ring' - this is a trend that is set to continue with other smartphone manufacturers, watch this space. The Mate 30 is equipped with a SuperSensing Triple Camera, comprising a 40MP SuperSensing Camera, 16MP Ultra Wide-angle Camera and an 8MP Telephoto Camera.

For the Pro, a 6.53in flex OLED display will be powered by the new Kirin 990 chip and will have a quad-camera system with the 40MP Cine camera, 40MP SuperSensing Camera, an 8MP Telephoto Camera and a 3D Depth Sensing Camera.

Huawei has gone beyond the norm for colours; the device comes in a nice range of hues, such as black, 'Space Silver', 'Cosmic Purple' and 'Emerald Green' but the extra here is the 'Vegan' range. These are 'skin-friendly' faux leather additions called 'Vegan Leather Orange' and 'Vegan Leather Forest Green'. There's a nice design perk on the non-vegan range in that they are matte to gloss finishes, where there is a matte feel from the bottom to the centre, reducing fingerprint smears, but it's hard to look beyond the crazy leather additions. 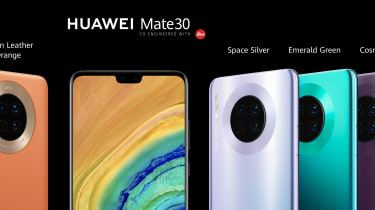 And so on to the burning question; what are these phones running on? Huawei EMUI 10 is the short answer, with the long, more detailed version half-explained. EMUI is the skin, or user interface the runs on top of Android, making a tailored version for Huawei. But with the ban still, very much in place, Huawei isn't allowed to use full-fat Android, so to speak. It can't have apps like Google Maps and Search bundled in.

Huawei did announce before the event that the Mate 30 would come without Google's apps and services, creating a bit of an issue in Europe as it won't have any Google Play services pre-installed. EMUI 10 is based on Android 10, but it's not the full version that comes with native Google apps. There is no HarmonyOS either, which was rumoured to be the replacement on the Mate 30, but if the Chinese giant can't get around the US trade ban, that may well be its future.

"The firm will struggle in Europe due to the lack of the Google Play Store," said Thomas Husson, VP and principal analyst Forrester. "If consumers can't easily access their favourite apps such as Facebook, WhatsApp, Instagram, Snapchat, YouTube, Google Maps and many more, retailers in some European countries may even be sceptical on the opportunity to distribute the devices.

"It will take time for Huawei to offer an alternative - not just to develop a smartphone-friendly version of Harmony OS but to foster a competitive ecosystem of brand and developer partners."

There's no official announcement regarding where the Mate 30 will be available, but IT Pro did receive pricing from the firm only in Euros (1199 for 5G version of the Pro) - read into that what you will.