Forget fridges: spend the £40m for IoT in a smart way

The government is investing £40m in the IoT. Nicole Kobie tells the chancellor how to spend it 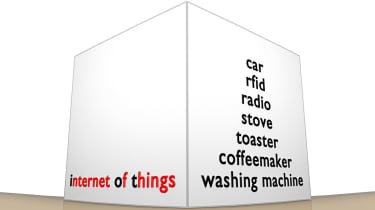 OPINION: 40 million is a lot to spend on smart fridges.

Chancellor George Osborne said his government will set aside the slice of cash in its last budget before the election to spur the Internet of Things industry in the UK.

"We will also invest in the Internet of Things," Osborne said as he announced the budget, going on to take a dig at Labour leader Ed Miliband's two kitchens. "This is the next stage of the information revolution, connecting up everything from urban transport to medical devices to household appliances. So should, using a completely ridiculous example, someone have two kitchens, they will be able to control both fridges from the mobile phone."

While 40 million might sound a lot for those of us with just one kitchen, but Cisco expects the IoT industry to be worth 100 billion over the next ten years, so encouraging growth looks likely to lead to a solid return on investment. But because there's so much money flowing into this latest tech buzzword, the government needn't use the contents of its coffers to spur development it should be more precise and encourage R&D in the right areas.

To start, security and standards. Yes, it sounds dull, but getting both right now will save millions of pounds of effort in the future. Many IoT projects are small, one-off pieces of hardware, and developers aren't spending enough time and effort building in security from the start.

We're still patching problems in the web because not enough attention was paid to security at the outset no wonder, given no-one knew how successful and important it would become but we're investing this 40 million believing this is the next revolution. This is our chance for the IoT to be secure by design: chuck some of that cash into a pot for security development, such as the BuildItSecure.ly project that offers expert advice to IoT projects to boost protection for users.

Standards are another area that should get funding. There's several competing standards for IoT, and it's impossible to say which will become the most popular, but the government has already backed the UK-led HyperCat. It has already received 6.4 million in funding, but is up against standards from companies such as Samsung and Google. Let's give it a chance to compete by boosting its development.

If those two areas get a funding boost, it will benefit everyone in IoT, but some of that cash should also be spent giving a leg up to UK startups. While much of the attention is on consumer gadgets, the government should use its spending power to boost IoT projects that will do more than track our runs, personalise our lighting or reorder milk.

While gimmicks like that are fun, they don't have the potential knock-on benefits of industrial IoT. At last week's RE.WORK Internet of Things Summit, Raphael Scheps of startup Converge showed off sensors that help judge if concrete has set. It's less sexy than consumer products, but has real value major building projects have to wait for concrete to set before continuing work, and speeding that along can save huge amounts of cash when staff for every day cost millions of pounds.

And that's just boosting the economy. If spent with care, this IoT funding could help solve other problems facing the UK. Smart medical devices could help alleviate the looming health-care crunch, sensors could boost agricultural production while cutting water use, and connected cars and lorries could reduce traffic and carbon emissions.

The IoT is the next revolution, but there's so much more than boosting the economy or getting out in front of US tech giants. This 40 million is a chance to push the UK's IoT industry in the right direction but only if it's spent in a smart way.