George Osborne's budget will boost apprenticeships, but not broadband 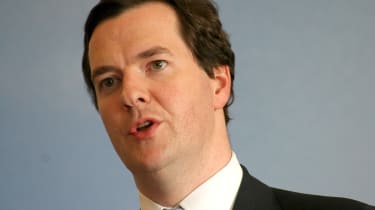 The first Conservative budget for nearly 20 years held little for the UK's technology sector, even as businesses look set to benefit.

Chancellor George Osborne announced a raft of business-oriented measures including a levy to fund apprenticeship schemes and plans to lower corporation tax, but there was scarcely a mention of tech in the 120-page Summer Budget.

Osborne's axe will fall primarily on welfare, with the government seeking to cut a further 12 billion from the sector as it hopes to create an economy of higher wages, low taxes and even lower benefit payments.

Another 5 billion will be saved by tackling tax avoidance and 20 billion through departmental spending reform.

Nevertheless, tech firms were surprised at the lack of apparent interest in Britain's technology sector.

Elizabeth Kanter, SAP's ‎director of government relations and public policy, said: "It was surprising that technology didn't play a more prominent role considering the massive impact it can have in addressing [UK productivity].

"In particular, we would have welcomed further investment in the skills and technical resources required to realise the value of Big Data."

But tech industry trade body TechUK's CEO, Julian David, suggested the government would take a stronger position on technology in the government's 'Plan for Productivity', due for release on Friday.

He said: "We look forward to seeing a greater focus on how digital technologies play a fundamental role in driving economic success right across the UK in the forthcoming Productivity Plan'."

While the Tories' election manifesto pledged to roll out superfast broadband to 95 per cent of the population by 2017, no mention of it was made in Osborne's budget.

Instead the technology focus fell on a few areas, chief among them the creation of a Northern Powerhouse where economic growth will be fuelled by devolution and improved transport links.

An elected mayor of Greater Manchester will have greater powers to direct the region's growth, while Whitehall said it is aiming to further devolve powers to Sheffield, Liverpool, Leeds, West Yorkshire and partner authorities.

Hello Soda, a Manchester-based fintech start-up, told IT Pro that giving the council more power would lead to faster growth in the area.

Marketing director Paul Shepherd said: "We're excited the councils will have more powers. Electing a mayor will help ensure these promises are kept and fuel up the Northern Powerhouse.

"Better transport links, oyster-style ticketing and devolution of powers throughout the North and the country will improve nationwide tech and enterprise hubs, employment and our economy."

Whitehall will plunge 23 million into six "Next Generation Digital Economy Centres", though the precise roles these centres will have was not clear from the budget document.

These sites in London, Swansea, Newcastle, Nottingham, York and Bath will also benefit from an additional 22 million funding from other sources to foster innovation in finance, healthcare and education, as well as the creative industries.

As part of this investment, the government will spend 4 million on a UK Regions Digital Research Facility at University College London, which has also leveraged 5.6 million in additional funding.

Neil Crockett, CEO at the Digital Catapult, another government-backed initiative to help digital innovation, said the new digital centres would complement the aims of his own scheme.

"The message from this budget is clear and we are encouraged by the strong focus on productivity, as well as the continued emphasis on building the Northern Powerhouse and investment in the Digital Economy Centres," he said.

"We look forward to working with the Digital Economy Centres to deliver maximum impact for the UK."

The Tories made a raft of business-friendly announcements, starting with the news that the Annual Investment Allowance, a tax-deductable sum firms can invest with - will not drop from 500,000 to 25,000 in January 2016.

Instead it will fall to 200,000, a figure Osborne intends to make permanent over the course of the current Parliament.

TIGA, the trade association representing the UK video games industry, welcomed the announcement, with CEO Richard Wilson saying: "This will enable more businesses to invest more of their retained profits in skills, equipment and product development."

Meanwhile, Osborne introduced a levy on "all large firms" to fund an apprenticeship scheme to bring another three million apprentices into work.

James Poyser, co-founder of inniAccounts, an online accounting service, said: "As an employer and founder of a tech business that wants to grow, I really welcome the apprenticeship reform. It pains me to see training firms punt young people and apprenticeships as cheap labour. We see them as a vital part of our lifeblood."

Much was made prior to the budget about the UK's poor productivity, with UK workers producing on average 30 per cent less an hour than staff in the US, France and Germany, according to the Office for National Statistics.

Jeremy Blackburn, Royal Institute of Chartered Surveyors' head of policy, welcomed some measures he believes will help solve this.

He said: "We are not training, building or investing enough and the apprenticeship levy will help address the skills gap in our industry.

"We know that property is central to productivity, but so is mobility. Fixing our infrastructure with a new 3 billion roads fund will drive locational investment and fuel government's commitment to devolving powers and funding across Britain."

But further work is required, with techUK puzzled over the lack of a technology focus, which it believes could help address poor productivity.

"In order to tackle the UK's productivity challenge we must improve performance across the whole of the UK economy," CEO David said. "Investment in the adoption of digital technologies will be fundamental to achieving this goal.

"In addition, technologies such as smart cities and the Internet of Things must be at the heart of the Chancellor's vision for devolution and securing our long-term economic future."

But the government must look at its own productivity challenges too, according to network monitoring firm SolarWinds, which pointed out Whitehall wasted 107 million in 2013/14 on cancelled and redundant IT projects, according to the Tax Payers' Alliance.

A spokesperson said: "As UK government cuts continue to dominate the headlines, so too does controversy around waste and inefficiencies in the public sector.

"Public sector IT policy needs to respond accordingly to these pressures, and often the simplest of efficiency gains can be overlooked due to organisational culture, legacy IT systems and lack of critical IT skills amongst government CIOs and their teams."

Whitehall is trying to respond to this by giving the Cabinet Office "seed funding" in the new budget to work with departments in generating business cases to create digital, user-friendly public services.

But a survey of 5,000 civil servants, commissioned by cloud collaboration firm Huddle, today found that 92 per cent of them do not trust the cloud, despite government initiatives like G-Cloud designed to use cloud as a way to cut down costs.

Huddle co-founder Alastair Mitchell said: "On the one hand, staff are being asked to remove 13 billion of spend, but on the other, the new cloud-based IT infrastructures that are key to a large proportion of these savings are not yet sufficiently understood or trusted enough to be widely deployed."