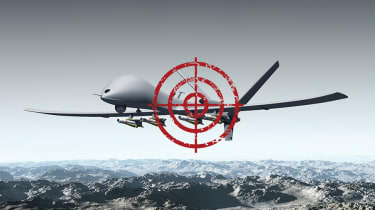 Some (51 per cent) of respondents to the survey, carried out by Unisys, did not think that drones would assist in combating anti-social behaviour, with 40 per cent voicing worries about drones compromising their personal privacy and 22 per cent concerned about drones posing a physical danger.

Another insight from the survey was that drone use has almost double the support among older demographics compared to younger groups.

Almost (61 per cent) of seniors aged over 65 felt that drones could help fight anti-social behaviour, compared to just one-third of  young adults aged 18 to 24.

Unmanned aerial vehicles are already seeing increased use in policing; Sussex and Surrey police forces were given a grant of almost 250,000 earlier this year to expand their trial scheme.

David Cameron has been pushing for the Armed Forces to spend more of its budget on drones, despite the fact that this may prove to be unpopular with the electorate.

The prime minister has urged defence chiefs to make funding for UAVs and the SAS a priority in the forthcoming strategic defence and security review.

Following the Summer Budget's revelation that Britain will meet NATO's requirement to spend two per cent of its GDP on defence for the next decade, the government must now meet with military leaders to decide the precise allocation of this money.

According to Cameron, this review should increase funding for unmanned drones. Robotic aircraft like the Reaper drone are used to carry out remote surveillance or bombing strikes on far-off targets, usually in dangerous regions like the Middle-East.

One of the principal advantages of UAVs is the fact that missions can be flown with no risk of operator life, as they are controlled remotely from thousands of miles away.

However, the US military has come under fire from critics and human rights groups for the high civilian death toll that drones can cause.

Parliament has also been increasingly pushing for their use in active bombing campaigns against Islamic State forces in Syria.

Cameron's other priorities for the review included the looming threat of Russia, which is still displaying troublingly aggressive behaviour towards Ukraine. However, the prime minister did not specify exactly what sort of action would be needed.

He also mentioned cyber terrorism, and the growing threat it poses to Britain. There are currently few details about the government's plans for cyber defence strategy, but Cameron made it clear that the issue is on Downing Street's radar.