MoD sticks with HP-led Atlas Consortium for £1.5bn IT upgrade 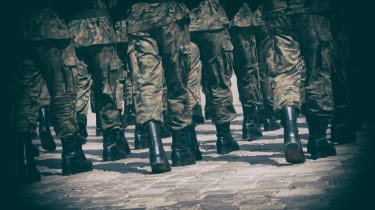 The Ministry of Defence is spending 1.5 billion in a bid to upgrade its IT systems, relying on a group of Big IT outsourcers led by HP to modernise the way 200,000 users work.

The department hopes to generate 1 billion in savings over the next decade through two contracts with Atlas Consortium, which includes companies such as Fujitsu, Airbus Defence and Space and CGI, that could dramatically change the way civil servants and military officers interact with technology.

A 933 million deal signed between the parties will see Atlas firms provide the majority of MoD civilian and military staff with a new IT system based on HP Helion Managed Private Cloud, and using Microsoft's Office 365 cloud productivity suite, rolling it out to offices, headquarters and army bases by September 2016.

Users will benefit from greater agility and mobile working as a result, claims the MoD, which said the contract will "transform the delivery of information and communication technology across Defence, providing a new IT system fully exploiting the power of cloud computing".

It is a renegotiation of an extension to the controversial Defence Information Infrastructure (DII), which was first struck in 2005 with Atlas, but by 2008 was already running 18 months behind schedule, and eventually cost taxpayers 5.8 billion, more than double the original estimate.

But Ovum public sector analyst Chris Pennell told IT Pro that the MoD picked the same providers to ensure a level of continuity of service.

"DII was a huge undertaking for the MoD. So it makes sense, given the desire for stability and continued SLA performance, that the MoD should look towards the incumbent," he said.

Explaining the move, MoD CIO Mike Stone said: "I want to deliver information capabilities that are a force multiplier for both the business space and battle space through closer strategic alignment with industry partners."

The department claimed the latest deal would provide a "significant upgrade" to its existing IT capabilities, and users will be able to pay for services on a flexible consumption basis.

Those will include HP Unified Communications Services based on Microsoft Skype for Business to provide video-conferencing, immediate online meetings and instant messaging available on all MoD devices, such as desktops, virtualised desktops, tablets and phones.

This contract runs alongside a 550 million agreement with another Atlas Consortium member, Fujitsu, to provide the MoD with global connectivity for five years.

A further announcement around a contract for voice, video and mobile provision will be made shortly.

Defence Secretary Michael Fallon said: "We must keep pace with those who pose a threat to UK security, whether overt or cyber-based. The new contracts will enhance our fighting capability and make us more efficient in our work.

"Alongside this enhanced capability we have managed to secure huge savings of 1 billion over ten years. All of this money will be reinvested back into defence, ultimately helping keep Britain safe."

Pennell speculated the savings would come from chopping up the department's infrastructure into smaller parts that would be easier to manage.

"I would assume that a big part of the savings will come from breaking services down into more manageable chunks as well as helping the MoD to move towards more flexible solutions," he said.

But he added: "The pinch point will come around integration. The MoD wants to bring much of the outsourced integration work back in-house, but it is unclear if this will stretch to the new contract."

The deals struck with Atlas go against one of the Cabinet Office's procurement red lines, which states that no individual contract should cost over 100 million, though Pennell said the MoD is a special case.

"Given sensitivities around the work MoD undertake, normal IT rules do not really apply," he said.

However, the red lines were introduced at the start of 2014 to ensure departments embarked on IT projects with a reduced level of risk should the scheme run into problems, just like the DII did.

They were also meant to ensure taxpayers got value for money, with then-Cabinet Office minister Francis Maude:  "These red lines will ensure the government gets the best technology at the best price and we will be unashamedly militant about enforcing them."

Despite this rhetoric, the Cabinet Office did not respond to IT Pro about why the red lines were not enforced by the time of publication.

A separate enquiry to the MoD about where the 1 billion savings will come from has also gone unanswered so far.

That Atlas Consortium has won the contracts also goes against Cabinet Office rhetoric that argues departments should sign deals with smaller IT suppliers in order to gain savings and avoid overreliance on a small number of outsourcers.