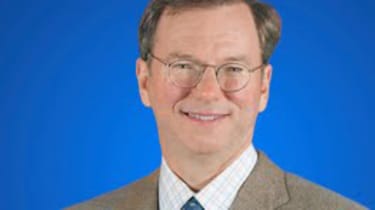 Eric Schmidt, the former CEO of Google and current executive chairman of its parent company Alphabet has agreed to lead a new advisory board intended to bring tech industry innovation and best practice to the American military establishment.

The creation of the Defense Innovation Advisory Board and Schmidt's appointment as its head was announced on behalf of US defense secretary Ash Carter in a press statement shortly before he spoke at RSA Conference 2016 on the topic of "Collaboration Between Silicon Valley and the Department of Defense".

According to the US Department of Defense (DoD) statement, the board is part of an initiative to change its culture and processes "by tapping innovators from the private sector, in Silicon Valley and beyond."

"The Defense Innovation Advisory Board will seek to advise the department on areas that are deeply familiar to Silicon Valley companies, such as rapid prototyping, iterative product development, complex data analysis in business decision making, the use of mobile and cloud applications, and organisational information sharing," the statement said.

The announcement comes at a time of conflict between the US state and its technology industry. Notably, Apple is currently facing off against the FBI in the US Congress, which has raised the spectre of weakened encryption - something that has been a hot topic at RSA Conference.

It is not currently evident who else from the industry will be involved other than Schmidt, but the DoD has said the other members will be hand picked by Schmidt and Carter.