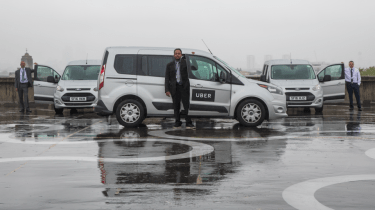 Uber is giving cab drivers another reason to dislike the ride-sharing app company: it is testing driverless cars.

Uber's Advanced Technology Centre (ATC) in Pittsburgh has kitted out a Ford Fusion with self-driving technology, such as radar, laser scanners and high-res cameras.

The cars will be tested across the US city, but will have a "trained" driver behind the wheel at all times.

"While Uber is still in the early days of our self-driving efforts, every day of testing leads to improvements," the company said in a blog post. "Right now we're focused on getting the technology right and ensuring it's safe for everyone on the road pedestrians, cyclists and other drivers."

Uber has faced backlash from cabbies in London and been accused of not paying its drivers enough, but the company appears to be targeting car ownership rather than taxis.

CEO Travis Kalanick has previously said Uber costs more than it could "because you're not just paying for the car - you're paying for the other dude in the car," he told the Code conference in 2014.

"When there's no other dude in the car, the cost of taking an Uber anywhere becomes cheaper than owning a vehicle," he added. "So the magic there is, you basically bring the cost below the cost of ownership for everybody, and then car ownership goes away."

Driverless cars are not yet approved for public roads without someone behind the wheel, although governments in the UK and US appear keen to encourage the technology being tested on real streets - and Uber, rival Lyft and Google have teamed up to lobby regulators to accept the technology.

Here in Britain, the government hopes to have autonomous cars on the roads by 2020, but trials aren't expected to start until next year.