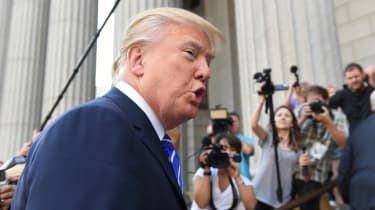 President-elect Donald Trump has summoned Silicon Valley tech leaders including the CEOs of Oracle and Cisco to a roundtable meeting in New York, according to an official within his transition team.

The meeting, which the New York Times reports is scheduled to take place next Wednesday, will be the first time that the heads of major tech firms have met the incoming president since he won the election last month. Oracle chief Safra Catz and Cisco boss Chuck Robbins confirmed their attendance to the Times, but other company leaders did not respond.

The tech industry at large was vehemently opposed to Trump's candidacy, and more than 140 industry players signed an open letter in July denouncing him as "a disaster for innovation". So strong was the opposition that several figures in Silicon Valley have even backed plans for California to secede from the United States altogether.

Trump, for his part, has largely responded in kind. He has made dramatic threats, such as investigating Amazon for its "huge antitrust problem" and forcing Apple to move its manufacturing stateside.

While the exact details are unknown, it is likely that next week's meeting will involve Trump attempting to get the tech industry in line with his presidential goals - namely increased US investment and job creation.

"I think he'd be wrong not to meet with them," said Creative Intellect UK analyst Bola Rotibi. "My interest would be in how he balances his rhetoric with reality," she said, pointing out that Trump cannot deal with the tech industry in isolation.

"Whatever he does for the tech industry he has to do for all industry," she said. "He can't make one rule for Apple and Microsoft and one rule for everyone else."

Spearheading these efforts will be Trump's top tech policy wonk, Peter Thiel. The PayPal co-founder and prominent Silicon Valley investor was one of the only figures in the tech industry to openly back Trump's campaign, and he has been given a prime spot in the new administration.

Japanese firm SoftBank, which bought ARM earlier this year, has already committed to creating 50,000 US jobs through $50 billion in investment, although experts have suggested that this may have been the company's plan regardless of who won the election.