Theo Blackwell will be responsible for upgrading public services technology 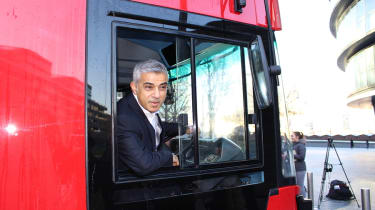 London Mayor Sadiq Khan has appointed the capital's first ever chief digital officer (CDO), with a view to improving the city's technical infrastructure and digital ecosystem.

The position has been filled by Theo Blackwell, a public sector veteran with 20 years' experience as Camden Council's cabinet member for finance, technology and growth. He is also part of the Advisory Board of Digital Leaders, and worked as games industry trade group Ukie's head of policy and public affairs.

Blackwell's role will center around the digital transformation of London's government and public sector services, working with the Mayor's Smart London Board to make the capital one of the world's leading 'smart cities' through the use of data-driven solutions and IoT technology.

"The new Chief Digital Officer post is an amazing opportunity to make our capital even more open to innovation, support jobs and investment and make our public services more effective," Blackwell said.

"The pace of change over the next decade requires public services to develop a stronger relationship with the tech sector. Our purpose is to fully harness London's world-class potential to make our public services faster and more reliable at doing things we expect online, but also adaptable enough to overcome the capital's most complex challenges."

One of the principal challenges for Blackwell in his new role will be coping with the fallout of Brexit and its impact on the London tech economy. Although London's startup scene has already pulled in 1 billion since the country voted to leave the EU, there are indications that external investment, IT jobs and skilled tech workers may start to dry up once Britain pulls out.

Mayor Khan remained bullish about London's tech economy however, saying: "I am determined to make London the world's leading 'smart city' with digital technology and data at the heart of making our capital a better place to live, work and visit. We already lead in digital technology, data science and innovation and I want us to make full use of this in transforming our public services for Londoners and the millions of visitors to our great city."

The Mayor of London is looking for the capital's first ever chief digital officer (CDO) to transform the city's public services.

The CDO will be responsible for building on existing digital initiatives and drafting a Smart London Strategy, aimed at increasing innovation using "smart technologies".

"I am delighted to begin my search for a Chief Digital Officer, so we can make London an even smarter smart city and use our incredible technological abilities to the best effect."

The move fulfills an election manifesto pledge for Khan, who promised his CDO would be responsible for tech sector growth, cyber security measures, and digital inclusion.

London hosts 40,000 digital technology businesses, according to Oxford Economics, which forecasts another 12,500 by 2025. Despite the Brexit vote hitting some tech startups, the capital's tech sector received 1 billion in venture capital investment since the Leave vote, according to PitchBook data.

When appointed, the CDO will work with the Mayor's Smart London Board and City Hall to draft and deliver the Smart London Strategy, as well as alongside the Mayor's Office, London councils and tech firms to drive adoption of common data standards and smart city technology.

They will also be responsible for anticipating the impact of new technologies and helping the Greater London Assembly respond with timely policies.

One challenge London will face in the coming years is the advent of AI. The Science and Technology Committee called on the government to reskill UK workers to ensure thousands are not left unemployed if they lose their jobs to automation.

Russ Shaw, founder of Tech London Advocates, told IT Pro in a statement: "We welcome today's news that City Hall is hiring its first CDO, originally proposed in Tech London Advocates' digital manifesto at the start of last year. This shows that Mayor Khan is upgrading public services for a digital age, and that London is on the way to becoming a smart city.

"The CDO role should be well-defined and the holder must be capable of supporting Mayor Khan's challenging pledges while building an open data platform from scratch. Achieving the insights necessary to freeze transport fares or increase housing supply for Londoners will require advanced data analytics, and the CDO will need to sit at the heart of London's government to ensure the office is effective. "