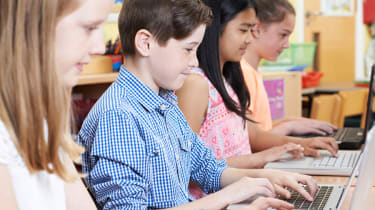 The Royal Society has laid bare the problems facing tech skills development in the UK, with a shortage of teachers and low uptake of key subjects exposed in a new report.

While 70% of pupils attend schools offering GCSE computer science, a total 54% of secondary schools don't list the subject at all, the After the reboot report found.

"Our evidence shows that computing education across the UK is patchy and fragile," the report read. "Its future development and sustainability depend on swift and coordinated action by governments, industry, and non-profit organisations.

"Neglecting the opportunities to act would risk damaging both the education of future generations and our economic prosperity as a nation."

The new English, Welsh and Northern Irish GCSE in computer science saw entries rise from 60,146 in 2016 to 65,205 in 2017. Scotland's entry numbers for the equivalent National Qualification in computing science are more stable, at around 7,400 entries.

But the outmoded GCSE in ICT, which the computer science GCSE will soon replace, still accounted for 55% of all computing qualification entries for 16-year-olds.

As a result, "there is a risk that there will be a drastic drop in the number of pupils studying computing as ICT is phased out," the report claimed.

An analysis of Ofqual GCSE exam figures by the British Computing Society this summer also found that a drastic drop off in ICT entries wasn't being offset by an opposite jump in computer science entries.

A Department for Education (DfE) spokesperson said: "Computer science GCSE entries continue to rise more quickly than any other subject. We recently saw an increase in entries to STEM subjects for the EBacc and the number of girls taking STEM subjects at A-levels has increased by over 17% since 2010."

The report also raised concerns over teacher training, saying: "A majority of teachers are teaching an unfamiliar school subject without adequate support. Moreover, they may be the only teacher in their school with this task."

It found that the UK government only hit 68% of its computing teacher recruitment targets from 2012 to 2017.

The DfE's spokesperson said: "We want to ensure our future workforce has the skills we need to drive the future productivity and economy of this country and that is why the government made computing a compulsory part of the national curriculum.

"Since 2012, the department has pledged 5 million to the Network of Teaching Excellence in Computer Science programme, which has built a national network of nearly 400 computer science specialists schools can commission to provide bespoke training for their teachers."