From the IoT to AI, tech can offer solutions to some of the world's biggest ecological questions 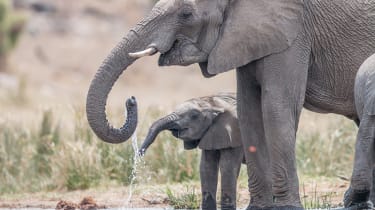 The relationship between technology and the environment is rarely perceived as harmonious. For quite some time, it's been argued that technology does more harm than good for the planet, whether it be the destruction of forests for the creation if cities or the extraction of fossil fuels to power our cars, homes, and the like. Such consequences often prompt various conservation and sustainability efforts.

As these efforts are typically responses to technology's harmful impacts, we tend to view it as environmentally damaging. Our negative connotations, however, often get in the way of us understanding the various ways certain technologies can actually improve our planetand how they already have.

In 2014, HydroPoint Data Systems used an Internet of Things (IoT) approach to assist water conservation efforts. The company formulated a machine-to-machine (M2M) solution that would connect irrigation control points and sensors to the system it used for analysing climate and determining water needs.

Each control and sensor had its own SIM card, so each could be individually contacted for control and data collection. AT&T provided the company with the wireless network, customised network, and self-service management program necessary for the solution's success.

Detailed maps were generated at the beginning of each project, including information about soil, terrain, and locations of the controls, which were identified by the controls' SIM cards, valves, and water meters. Information obtained from these maps provided property managers with information they often hadn't seen before.

According to a case study put out by AT&T, HydroPoint's solution not only saved customers $137 million in expenses, but also 15 billion gallons of water that year alone.

HydroPoint isn't the only company using the IoT as a response to water conservation, either.

By using DCU sensors equipped with IBM IoT technologies, researchers are able to discover trends or early detections of changes in the environment that are essential for both public health and safety and remediation efforts.

Although this project is currently only being tested in one lake in the United States, it highlights the fact that big-name technology companies are stepping up to play a role in conservation and sustainability efforts.

Organisations use Big Data analytics to uncover trends and patterns that would assist in making decisions beneficial for business. Conservation and sustainability groups have been using Big Data analytics for this exact same reason, but to benefit the environment.

In 2013, Hewlett-Packard (as was) teamed up with Conservation International to create HP Earth Insights: a collaborative program using HP's Big Data solutions to create an early warning system for endangered species in tropical ecosystems.

By September 2014, HP Earth Insights managed more than 3TB of biodiversity information. As a result, the program was able to detected which populations were being threatened. For example, results found that 33 of the 275 monitored species had significantly decreased in population.

The information collected by the program was not only shared with scientists, but also made public so more people and organisations could access it. This way, threats could be responded to as soon as they emerged, rather than after the damage had been done.

"It's time that we have the power of Big Data and the power of monitoring to help us actually make a better world," said Dr Jorge Ahumada, executive director of the TEAM Network, in a video put out by HP.

Big Data analytics are also being used in an attempt to revolutionise conservation management globally.

One of the company's most notable projects is the Great Elephant Census, which was a collaborative effort led by Elephants Without Borders, a charitable organisation dedicated to conserving wildlife resources. Between 2007 and 2014, the initiative worked to accurately monitor and determine African savanna elephant populations.

As much of the data was collected by flying over various African regions, Vulcan developed a flight data logger tool. This system allowed census data to be counted, stored, visualised, and shared. Without the use of this Big Data technology, it would have taken much longer and been more inefficient to collect and interpret such an extensive amount of data.

Vulcan has also recently developed the Domain Awareness System (DAS) to assist anti-poaching organisations. DAS works as an interactive map-based management system that uses GPS, camera traps, and more to monitor animals in protected areas. By integrating data from technology used in these protected areas, the system is able to alert rangers when a threat is detected.

The company has also been designing and developing technologies aimed at improving ocean conservation and marine life management.

Although artificial intelligence hasn't been as prominent as IoT or Big Data analytics in supporting conservation efforts, it has been gaining some ground recently.

Earlier this year, biological anthropologist Rachel Jacobs and her colleague, Stacey Tecot, came up with an idea to identify and track endangered lemur populations in a noninvasive way: using facial recognition technology.

Jacobs and Tecot teamed up with Anil Jain, who teaches biometrics at Michigan State University, and his students to come up with a solution. Jain and his students collected hundreds of photographs taken by Jacobs and Tecot and put them through facial-recognition software. As a result, the system was able to identify each individual lemur and a new computer-assisted recognition system was born.

The system, known as LemurFaceID, will ultimately help to build a database that allows for long-term research on endangered lemur populations.

"The ability to consistently study individuals over long periods of time, as well as integrate data across different studies, are some of the challenges we face when studying wild animal populations," Jacobs explained.

The scientists behind the project hope that this method of tracking will change how researchers track species in the future.

Other conservation groups, such as those tackling the issues of illegal fishing or poaching, have also been considering ways to incorporate artificial intelligence into enhancing their efforts.

With global biodiversity succumbing to a speedy decline, conservation and sustainability efforts are arguably more important than ever. While it's easy for us to simply blame technology as a major cause of this, it's essential that we shift our focus towards a solution instead of remaining stuck on the problem. Although technology has clearly played its part in damaging the environment, we should recognise all it can do and has been doing to repair it.