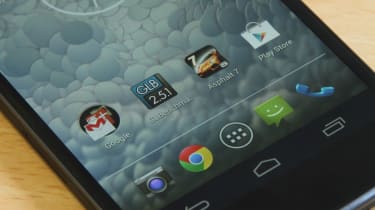 Google Chrome for Nexus phones has been broken during the Mobile Pwn2Own competition, leaving devices at risk of potentially serious compromise.

With Safari on an iPhone 5 and a Samsung Galaxy S4 already shown to have potentially serious weaknesses, a hacking crew called Pinkie Pie broke Chrome on a Nexus 4. They later did the same on the Galaxy device.

Companies need to take mobile security more seriously, especially when they start implementing things like Bring Your Own Device and allow customers to include corporate data on their phones.

The team were rewarded with $50,000 (31,000) for attacks that took advantage of two vulnerabilities: an integer overflow and another that resulted in a full sandbox escape. A hacker who took advantage of the flaws could remotely execute code, potentially allowing them to install malicious applications on a target phone.

As with the hacks on the iPhone 5 and Galaxy S4 earlier this week, the Chrome breach would require some social engineering to get the target to visit a malicious website.

Google were alerted to the vulnerability by Pwn2Own organisers, the HP Zero Day Initiative (ZDI). It had not responded to a request for comment at the time of publication.

Earlier this week, China's Keen Team were handed $27,000 for getting around Safari protections to steal Facebook login credentials for an iPhone and steal a picture taken of the Mobile Pwn2Own audience.

Japan's Team MBSD, of Mitsui Bussan Secure Directions, were rewarded with $40,000 for exploiting vulnerabilities in a number of Samsung applications installed by default on the popular Galaxy S4.

Apple and Samsung have been warned about the flaws, but neither had responded to requests for comment on the vulnerabilities. It's unclear when any of the Pwn2Own flaws will be patched.

"That's why we launched Mobile Pwn2Ownto get researchers to responsibly disclose these vulnerabilities," Gorenc said. "We're really reaching out around the world to get research techniques that are unique, that we haven't seen before.

"Companies need to take mobile security more seriously, especially when they start implementing things like Bring Your Own Device and allow customers to include corporate data on their phones."

Despite the apparent success of the competition, no one received the top prize of $100,000, which was promised to anyone who could hack a phone's baseband processor, allowing them to scoop up radio signals and listen in on people's conversations.