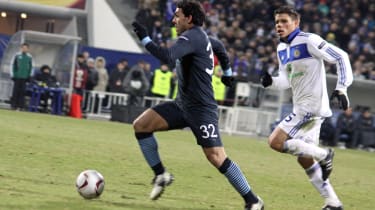 Fancy Bears has released documents that claim to reveal footballers who were cleared to use banned medicines during the 2010 World Cup.

In total, 28 players were given Therapeutic Use Exemptions (TUEs), which are handed to players to allow them to use a prohibited substance in order to treat a legitimate condition they have. Players must apply to the World Anti-Doping Agency (WADA) in order to get a TUE.

Argentina player Carlos Tevez, Germany's Mario Gomez and Dirk Kuyt, from the Netherlands, were among those named in the leak. There is no suggestion that any of these players have violated any anti-doping rules. Tevez was using betamethasone, a corticosteroid with a variety of uses, including treating rheumatic disorders. Kuyt's exemption allowed him to use dexamethasone, another corticosteroid used to treat allergies, skin conditions and arthritis. Gomez was allowed to use salbutamol, a medication that alleviates asthma by opening airways in the lungs.

Four of these tests were registered by UK Anti-Doping. Three anonymous male players tested positive for cocaine and another male player had "methylenedioxymethamphetamine", also known as ecstasy, in his system. The cocaine tests took place on 18 May 2015 and the ecstasy test took place on 18 August 2015.

The hackers leaked a number of documents too, including an email the FA's head of integrity, Jenni Kennedy, sent to FIFA's Alexis Weber, relating to investigations into players from three clubs for possible drug use.

Another document, sent from FIFA's Greta Pons to Weber, stated: "According to the WADA statistic, football is the sport with the highest number of doping samples with approximately 30,000 samples per year on average."

A FIFA spokesperson told IT Pro: "FIFA condemns in the strongest terms the publication by the Fancy Bears group of information obtained illegally, particularly personal and medical data from athletes. The release of such information constitutes a clear violation of the athletes privacy and puts at risk the ongoing fight against doping. All potential violations of the anti-doping regulations are handled by FIFA in accordance with WADA regulations."

Fancy Bears released documents in July naming 50 athletes who were suspected of doping by the International Association of Athletics Federations (IAAF). One of the athletes was Mo Farah, who returned a sample which needed further testing. The sample was flagged but he was then cleared of suspicion.

Mo Farah was one of 50 athletes suspected of doping exposed in the latest Fancy Bears hack of the International Association of Athletics Federations (IAAF), but was later cleared of suspicion.

The data showed he was flagged by a hematological expert as "likely doping; Passport suspicious; further data is required" from a test submitted on 23 November 2015. A later document from April 2016 shows that he did not undergo intensive testing in the next two months after the sample was flagged but is then cleared of suspicion as he was then flagged as "Normal".

A spokesperson for Farah told IT Pro that he has never failed a single blood test during his career. He said: "We have never been informed of any of Mo's test results being outside of the legal parameters."

The spokesperson added: "Nor has Mo ever been contacted by the IAAF about any individual result. It is totally incorrect and defamatory to suggest otherwise, and we will pursue any claims to the contrary through all necessary legal routes."

The spokesperson pointed out that previous leaks from the organisation have included false or doctored documents in the past, and they have asked the IAAF to urgently look into the validity.

"Regardless, any suggestion of misconduct is entirely false and seriously misleading. Mo Farah has been subject to many blood tests during his career and has never failed a single one" said the spokesperson.

The IAAF said in April that it had been hacked in February and believes yesterday's release of data was the same hack but was "looking into" the matter.