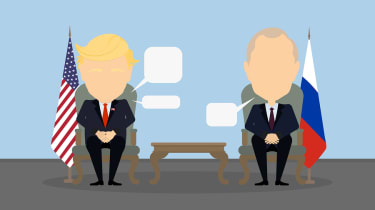 Referring to his G20 summit meeting with Putin, Trump tweeted yesterday: "Putin and I discussed forming an impenetrable Cyber Security unit so that election hacking, & many other negative things, will be guarded.."

The idea of a cyber security unit with Russia, which US security agencies have blamed for hacking the presidential election last year and targeting voting officials, was immediately shot down by other Republicans, who asked why the US would work with Russia given its alleged role in compromising US security.

Senator Marco Rubio took to Twitter to say: "Partnering with Putin on a 'Cyber Security Unit' is akin to partnering with Assad on a 'Chemical Weapons Unit'". He went on to say that Putin will never be a trusted ally or a reliable constructive partner of the US.

Ash Carter, a former US defense secretary in the Obama administration, told CNN: "This is like the guy who robbed your house proposing a working group on burglary."

Trump adviser and Treasury Secretary Steve Mnuchin sought to explain Trump's cyber push. He described it on ABC's This Week programme as a "significant accomplishment" for Trump. He added: "What we want to make sure is that we co-ordinate with Russia".

Trump, who had been visiting Germany for the G20 conference, where he talked with Putin, later backtracked on Twitter, adding that a discussed ceasefire in the Syria conflict was already in effect. He said: "The fact that President Putin and I discussed a Cyber Security unit doesn't mean I think it can happen. It can't-but a ceasefire can,& did!".

The fact that President Putin and I discussed a Cyber Security unit doesn't mean I think it can happen. It can't-but a ceasefire can,& did!

Special prosecutor Robert Mueller is leading a Department of Justice investigation into Russia's possible role in the US election hacking scandal, and will look at whether Trump associates worked with Russia to influence the 2016 election.

Trump and Putin had discussed the allegations although, according to the BBC, the two sides described the content of the meeting differently. Trump said he "strongly pressed" the issue with Putin, who had "vehemently denied" interfering in the election. Putin said Trump had accepted his reassurances that Russia had not intervened.

The US government officially blamed Russia in October last year for cyber hacks exposing 19,000 emails from DNC servers. This was the first time the White House had explicitly attributed the attack to Russia, saying it was trying to interfere in the US election. Russia denied any involvement in the attacks and a spokesperson for Putin extended an offer for Moscow and Washington to work together on tackling cybercrime.

Trump's son recently admitted to meeting a Russian lawyer last year who promised to reveal damaging material on Hillary Clinton, as reported by the BBC. Despite this, Donald Trump Jr. insisted that the lawyer provided "no meaningful information" on Clinton. It is thought to be the first confirmed meeting between a Russian national and members of Trump's inner circle.