From Anonymous to Omega, here’s everything you need to know about hackers with a conscience 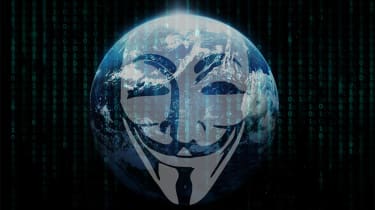 The rise of hacking over the last few years, coupled with a heightened sense of political awareness across society, has increasingly led criminals to engage in agenda-driven attacks - as opposed to taking down websites or spreading malware for purely financial reasons.

Hacktivism, as a term, has become more prevalent in recent years and describes groups or individuals who plan to affect political change and damage their ideological opponents. Prominent incidents in this space include a group of hackers who revealed the email addresses of nearly 2,000 subscribers to an Isis-supporting newsletter, or even threats to take down US President Donald Trump.

First coined by Omega, a member of the retro hacking group Cult of the Dead Cow, in the mid-90s, 'hacktivism' was defined as the use of computer hacking to express political or sociological beliefs. The meaning of the term was loose and could span passive actions, such as just expressing an idea, to malicious attacks targeting ideological opponents.

In light of the range of motivations that drive hacktivists, there is also a wide range of tools and methods to carry out one's desires - the most common being a denial-of-service (DDoS) attack. These attacks are launched to take down a website by flooding it with fake traffic.

Elsewhere, hacktivists have previously relied on data theft to expose sensitive files or records belonging to a target publicly over the internet - a method typically deployed to expose targets with something to hide, such as large corporations or governments. Prominent targets have also included donors to political campaigns, or individuals alleged to have evading tax.

Hacktivism has its roots in the early days of the internet when hackers primarily congregated on Usenet and message boards. Many of these early hackers were motivated by idealism, with a general tendency towards left-wing, anti-capitalist, anti-corporate viewpoints. This, combined with a sense of anarchic mischief and a love of messing with people and systems, spurred numerous hacks protesting various social and political issues.

Hackers deployed various forms of malware against targets to disrupt their operations, hindering progress by rendering computer systems and networks unusable. An early example was the hilariously named Worms Against Nuclear Killers (a rather explicit acronym!) malware, which was released into NASA's networks in 1989 to protest the launch of the nuclear-powered rocket carrying the Galileo probe into orbit. The attack reportedly cost the project half a million dollars in lost time and resources, according to officials.

Modern hacktivism, however, has been defined mainly by the group known as 'Anonymous'. First emerging in the early 2000's, 'Anonymous' was originally the collective name given to groups of users from the 4chan message boards, who would frequently band together to attack targets based on little more than an idle whim. These attacks ranged from relatively harmless pranks, such as ordering numerous pizzas to someone's house, to more vicious attacks such as carrying out DDOS strikes against websites or doxxing people.

What makes Anonymous unique is that it has no formal membership, controlling body or internal structure. Anyone can participate in its operations at will, and the targets and attack vectors it picks are determined by popular consensus amongst its members and fans. In its early days, Anonymous wasn't overly focused on political or ideological issues, preferring instead to target internet personalities that its members felt needed to be taken down a peg or two.

The group's first real foray into hacktivism came in 2008 when the group began a campaign of attacks against the church of Scientology. Operation Chanology, as it was known, included a week-long DDoS against the church's website, along with physical protests outside various Scientologist properties. The adoption by protestors of the Guy Fawkes mask from cult graphic novel V for Vendetta, incidentally, is what led to its now-iconic status as a symbol of hacktivism.

Following Project Chanology, Anonymous has also been heavily involved in various campaigns to foil attacks on internet freedoms. The group mounted significant efforts to fight the Stop Online Piracy Act (SOPA) and the Protect Intellectual Property Act (PIPA), both of which were accused of being efforts to censor the web. In more recent years, the group has been carrying out persistent attacks against the online arms of the terrorist group ISIS, targeting websites and social media accounts used to spread propaganda.

Hacktivism is often controversial. While many decry the use of objectively illegal cyber attacks, no matter how noble the cause, many applaud vigilante hackers like Anonymous and others for taking the law into their own hands.

An excellent example of modern hacktivism at work is the attack on extramarital dating site Ashley Madison. A group calling itself Impact Team stole the personal information of 37 million members from the site, with references to users as "cheating dirtbags [who] deserve no such discretion" indicating that the attack was at least partially motivated by moral concerns.