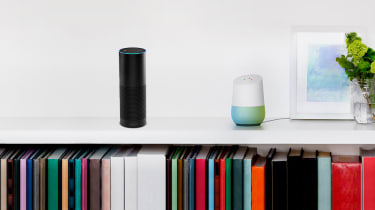 The Amazon Echo family is powered by Alexa, an AI core built on AWS' cloud infrastructure. It's essentially a voice-operated digital assistant, but thanks to machine learning algorithms, it's designed to get smarter the more you use it, adapting to your vocabulary, speech patterns, and usage habits.

Google Now has been part of the company's ecosystem for a while now, but it's now been upgraded to become the Google assistant. Like Google Now, it works across the whole Google portfolio, including Android, ChromeOS and the new Google Home. It's designed to respond in a natural, conversational manner to voice queries, and is also powered by cloud-based AI technology.

Apple was the first major company to introduce a digital assistant into its devices, with the launch of Siri. iPhone users can interact with their apps through Siri, and as of recent software upgrades, can also use Siri voice commands to control their Apple TV. This is what underpins Apple's HomePod, allowing users to ask questions, control music playback and interact with HomeKit devices.

At the moment, the Google Assistant is the most useful of the current crop. Not only does it feature a wide range of commands, tasks and integrations with various services, it also understands context, meaning you can string consecutive requests together. On top of that, it's synced across Android, ChromeOS and Google Home devices. However, it loses points for its speech engine, which doesn't sound quite as smooth and fluid as Alexa.

The Amazon Echo family features a number of different Alexa-powered devices. There's the flagship Echo Plus, identical in design to the original Echo, the redesigned Echo, which is smaller than the original with a fabric or wood-effect covering, and the Echo Dot. The company also produces the Echo Show and the Echo Spot, which have displays for tasks like making video calls or displaying news headlines.

The Echo Plus is designed primarily as a connected speaker, and that's what it looks like a smooth cylinder, with a speaker grille around the lower half. Accented by a snazzy ring of blue light around the top, the Echo looks sleek and professional and would be at home in either an office or a bedroom.

The basic Echo looks to have taken some design cues from Google Home, with a more aesthetically-pleasing exterior and a smaller, more compact footprint. The Echo Dot is a smaller and more affordable version, lacking the proper inbuilt speaker seen in the full-size Echo. This is similarly small and unobtrusive and looks like what you'd get if somebody pulled off the top two inches of the Echo.

Google Home, as the name would suggest, appears much more domestic in its appeal. It's shorter and fatter, with a rounded base and a slanted top. The base is also available in different colours and materials, so you'll be able to customise it depending on your interior decorating tastes.

Google also has a couple of variants of its smart speaker - the smaller Google Home Mini, and the beefy Google Home Max, touted as offering superior audio quality. 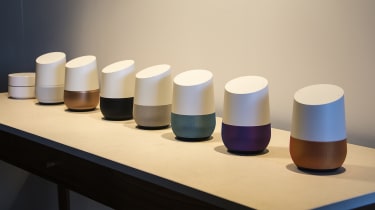 Physically, Apple's HomePod is the largest of the three products. It's squat and cylindrical, with a fine mesh covering. In fact, it's been described as 'a Mac Pro with a sock on it', and the two products are eerily similar in size and shape. It's somewhat surprising, considering Apple's design pedigree, that the HomePod is perhaps the least visually arresting of the three devices, and while it's unlikely to look out of place in your boardroom or living room it's not particularly inspiring either.

As you'd expect from connected speakers, the Echo devices have great integrations with various music services. Spotify, TuneIn, Pandora and iHeartRadio are all supported, as are both Amazon Music and Amazon Prime Music. They also work with Amazon's shopping platform, allowing users to order products with voice commands or check on the status of an order.

However, Alexa also connects to a host of other third-party applications. The most frequently-cited ones are the ability to order a pizza via Dominos or call an Uber, but you can also use the Echo to check the weather, get the latest headlines, or check what time the big game starts.

Smart home technology is supported too, and the Echo can talk to Internet of Things appliances from the likes of Wemo, Samsung, Nest, Hue and others to perform tasks like turning off the TV or dimming the lights. It's also got the advantage of being an open ecosystem, meaning any developer can create 'skills' for Alexa.

Google Home offers similar integrations, which is no surprise, as Google's ecosystem is one of the strongest around. It features integrations with a range of smart home products and music streaming services like Spotify and Google Play Music, with support for Deezer, Soundcloud and Spotify's free tier coming in a future update.

Its most interesting feature, however, is that it integrates directly with Google's Chromecast devices. This means you can ask it to play videos from Netflix and YouTube on your TV, or have it show details about your calendar schedule on the big screen. 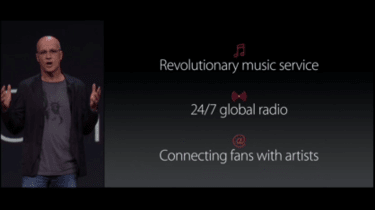 The main service that HomePod is built to connect with is Apple Music, and the company claims that Siri will act as a 'musicologist', intelligently helping you to discover new songs based on your listening habits. However, HomePod will also interact with every HomeKit-enabled device, as well as every app and service that features integrations with Siri.

In practice, all three products work in much the same way to each other. The only real differences are that the Echo connects to Amazon's shopping services, HomePod connects to Apple Music and Google Home can control your TV. Aside from these elements, there's not a great deal to differentiate the three.

Both the Amazon Echo and Google Home are currently available in the UK. The top-end Echo Plus retails for a total of 140 including VAT, while Google Home is slightly cheaper at 129. If you're slightly more budget-conscious, you can also get the smaller Echo for 90 or the slightly less capable Echo Dot for the very reasonable sum of 50. Similarly, you can pick up the Google Home Mini for just 49, although the Max is yet to make it to the UK. Apple's HomePod is, unsurprisingly, the most expensive of the three devices. Retailing on 9 February for the princely sum of 349, it's more than double the price of its two main competitors.