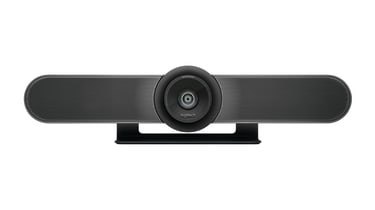 There's no denying 4K video conferencing (VC) is on its way and Logitech aims to be one of the first in the queue for your business. It launched its 4K Brio personal webcam earlier this year and now its MeetUp brings Ultra HD quality to small conference venues and huddle rooms.

At 400mm wide, this big sound bar can be placed on a wall with the supplied bracket, underneath a TV/monitor on its integral stand or on top of it using the optional mounting bracket. Flanked on each side by speaker grilles, the Logitech camera takes centre stage with its 4K Ultra HD sensor and a massive 120-degree field of view (FoV).

The lens sits in a motorized carrier for remote pan and tilt operations and it has a 5X digital zoom. The kit includes a solid metal RF remote control handset with buttons for pan, tilt and zoom, volume levels, mute, making or ending voice calls and activating Bluetooth.

At the back is a port for the external power supply and a Type C USB 3 port for connection to a PC or Mac running your VC app. Unfortunately, Logitech's choice of USB cable shows it doesn't see 4K VC happening any time soon.

The kit includes a 5 metre USB 2 cable which only supports HD 1080p video streaming. Logitech's manual states clearly that you'll need to source your own USB 3 cable if you plan on using 4K streaming.

We installed the MeetUp on a Windows 10 host which loaded the required drivers when we connected it. Logitech's handy Camera Settings utility allowed us to view the camera feed to aid positioning, choose standard or widescreen modes and tweak contrast, brightness and colour balance.

The MeetUp can also be remotely controlled with Logitech's ConferenceCam Soft Remote app for Android and iOS. We tested the latter on our iPad which scanned the network, spotted the Windows host PC with the camera attached, connected to it and opened up a soft replica of the RC handset.

We also tested the MeetUp on a MacBook Pro which had no problems working with it. Logitech also provides a Mac OS X version of the Camera Settings utility which provides the same features as the Windows one.

We found Skype meetings easy to set up and WebEx had no problems either but, as with all current VC services, they only support 1080p video streaming. Even so, the general consensus of all our participants was that video quality was sharp and clear with great contrast and colour balance.

We controlled pan and tilt operations from the handset and iOS app with a full horizontal sweep taking 7 seconds. The zoom function can also be remotely controlled but being the digital variety means image quality deteriorates at the maximum 5X setting.

The MeetUp speaker performed well and easily covered our 6.5 metre long conference room. Direct comparisons with Logitech's portable ConferenceCam Connect showed that the MeetUp was capable of far higher volume levels, although it lacks any decent bass and sounded quite shrill at times.

The three omni-directional mics also worked very well as callers said they could hear us clearly at the maximum 2.4 metre range. For larger rooms, Logitech offers an optional speaker/mic extension unit which has a 6 metre cable that plugs into a dedicated port on the MeetUp.

With few VC services currently supporting 4K streaming, SMBs will find it difficult to justify the 750 asking price for the MeetUp. And even when 4K is supported, they'll need to consider its high network bandwidth requirements which current estimates put at a minimum of 15-25Mbits/sec.

That said, it's a lot cheaper than proprietary systems such as Cisco's Spark Room Kit which starts at nearly three grand. The MeetUp's image quality at 1080p is also excellent so if you want a versatile, future-proofed VC solution then this is a great choice.

With few VC services currently supporting 4K streaming, SMBs will find it difficult to justify the £750 asking price for the MeetUp. That said, it’s a lot cheaper than proprietary systems. The MeetUp’s image quality at 1080p is also excellent so if you want a versatile, future-proofed VC solution then this is a great choice.