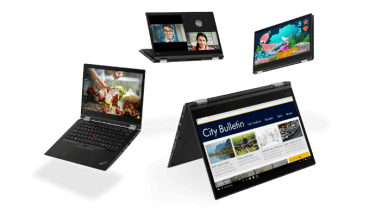 Chinese laptop giant Lenovo has unveiled a new range of thinner and lighter ThinkPad devices ahead of CES, all powered by 8th Generation Intel Core processors.

While it's probably not the best time to announce new devices powered by Intel chips after the news of the Intel CPU design flaw reported this week, Lenovo's fresh line-up includes additions to the ThinkPad T, X and L portfolio.

Across the three ranges, Lenovo has introduced a broader support of Facial Recognition for Windows Hello, a physical webcam cover called a "ThinkShutter" so people feel less paranoid that their webcam is allowing hackers to watch them, and universal USB Type-C power adapters across all ThinkPad models.

The most noteworthy among the new devices is the ThinkPad X280 and X380 Yoga, the latter of which is said to be 20% lighter (now at 1.13kg) and 1% thinner (at 17.4mm) than its predecessor alongside a 360-degree hinge design, meaning you can twist it into a tablet if you see fit.

Touted by the company as being able to work "in some of the world's most inhospitable places", both the devices have Lenovo's Rapid Charge technology baked in, promising to deliver 80% battery life in 60 minutes, with the X280 offering up to 16.6 hours and the X380 Yoga offering up to 13.6 hours of battery life after a full charge.

The new ThinkPad T Series is marketed as a "corporate workhorse" and includes privacy protection features such as an IR camera, fingerprint reader and, again, the ThinkShutter camera cover to protect valuable user data. However, the big deal with the T Series is that Lenovo claims some of the models' battery life will last over a full day without needing a charge, delivering a whopping 27 hours of battery life.