A very fast NAS, but the basic interface and high price slightly let it down 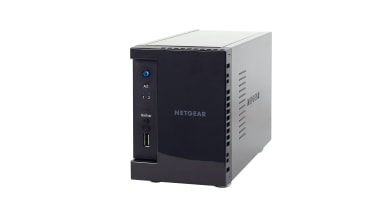 Although cloud storage has really taken off, you can't beat a NAS if you want fast local storage for sharing files. With a barebones NAS, such as the Netgear ReadyNAS 212, you've also got a handy way of reusing any old mechanical hard disks that you've got lying around.

A small shoebox-sized device, the ReadyNAS 212 is relatively easy to set up. Open the front door, and you've got two 3.5in hard disk bays that pop out, so that you can fit your hard disks. There's support for up to 20TB of storage via two 10TB disks.

There are also three USB3 and a single eSATA port for adding external storage and printers.

Once installed, you just hook your NAS up to your network and power it on. Netgear provides two Gigabit Ethernet ports. If you've got a router or switch that supports link aggregation, you can combine the two ports into one big 2Gbit/s pipe.

That won't improve performance to a single device (you'll still be running 1Gbit/s from your clients), but it provides more bandwidth for multiple devices. For example, two devices could access the NAS at the full 1Gbit/s each. Link aggregation is configured post-setup.

Once the ReadyNAS 212 is connected to your network, you just need to follow the quick setup guide. Our computer couldn't detect the NAS on our network using the suggested web portal. Instead, we downloaded the Netgear RAIDar software, which soon found our unconfigured NAS. A quick jaunt through the setup wizard soon had our NAS up and running.

By default, the ReadyNAS chose to configure our disks in a RAID 1 configuration. This cuts the total storage space in half (we got 2TB of usable space from 4TB of disks), but data is written to both hard disks. Should one disk fail, your data remains safe. This is the configuration that we recommend, although you can choose to override the setting and reformat the disks as RAID 0. This gives you the full capacity of both drives, but you'll lose all of your data if either disk fails.

The basic functions of creating a share and adding users are simple enough, and it's trivial to create the shared folders that you need. Digging into the interface, it becomes clear that the ReadyNAS 212 is more powerful than looks would have you believe. First, there are the basic services that you can toggle on and off, such as an FTP server and a DLNA media server (ReadyDLNA).

If you want more, then there's an apps section. Similar in principle to Synology Packages, apps let you expand the capabilities of the NAS. It might be worth adding the Nero MediaHome server to replace the built-in ReadyDLNA option, as you get easier control and more configuration options.

Netgear doesn't quite have the breadth of services that Synology does, but the basics are covered, from web servers to a network camera recorder.

Netgear has a Cloud section for the NAS's cloud connectivity. You can synchronise your Dropbox or Google Drive account to your NAS, which is a handy way of adding cloud backup to the ReadyNAS 212.

There's also the ReadyCloud feature, which lets you access your NAS from over the internet, anywhere in the world. Using this is far easier than setting up an FTP server manually, as Netgear takes care of all the configuration options.

Netgear has installed 2GB of RAM and a quad-core 1.4GHz Cortex A15 processors. That's a fairly high spec for a two-bay NAS.

We saw similar performance from the CrystalDiskMark benchmark. Sequential file speeds came in at 118.4MB/s read and 114.1MB/s write. And, the 4K random file tests managed a healthy 14.56MB/s read and 11.58MB/s write.

These speeds typically put the ReadyNAS 212 at between 10 and 20% faster than the excellent Synology DS216J.

If you want a super-fast two-bay NAS, there's no arguing with the ReadyNAS 212's performance. But, the cost of that performance is high, and this is one of the most expensive two-bay NAS devices in its category.

The Synology DS216J is almost 90 cheaper, not that much slower overall, and has a neater and easier to use web interface. On balance, it's the better NAS for most people.

If you want a super-fast two-bay NAS, there's no arguing with the ReadyNAS 212's performance. But, the cost of that performance is high, and this is one of the most expensive two-bay NAS devices in its category.