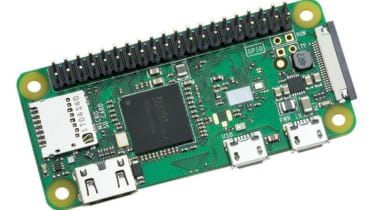 The $249 (180) bundle includes a LimeSDR Mini with two antennae running on the 433/868/915MHz unlicensed bands. It also comprises a GrovePi+ add-on board and a range of Grove sensors, such as the Ultrasonic Ranger distance measurement module, temperature and humidity sensor, light sensor, sound sensor, an LCD RGB backlight, buzzer, touch sensor and vibration sensor, alongside other add-ons for producing a whole spectrum of IoT devices.

"One of the key reasons we created the LimeSDR was to open access to this technology to as many people as possible. This kit plays a big part in enabling this," Ebrahim Bushehri, CEO of Lime.

"Of course, the kit is not limited to Scratch and educational environments, so we'll also be putting together examples that demonstrate how the kit can be used to develop applications that integrate with existing off-the-shelf systems, such as wireless thermostats and remote controls."

"We are excited to announce that we've partnered with Lime Microsystems to develop the Grove Starter Kit for LimeSDR Mini," Eric Pan, CEO of Seeed, said. "It will provide a great platform for users to learn about SDR and help kick off IoT projects with the LimeSDR Mini. We cannot wait to see what the community will do with this new kit!"

The Raspberry Pi Foundation has quietly launched a new version of its microcomputer device, with a header professionally soldered on to make it easier to use for hardware projects.

This new soldered-on header setup could also reduce the setup costs of trying out physical computing, the foundation said. And with the GPIO expander tool, Raspberry Pi fans can access the GPIO pins on the header with a PC or Mac without the need to use the SSH (Secure Shell) protocol, adding a greater deal of flexibility over previous releases.

The new Raspberry Pi Zero WH is available now from the PiHut website for just 13.40. However, don't expect to get your mitts on it just yet, as the site quotes limited availability for the moment.

The Zero W sold 250,000 units in just nine weeks last year, but Pi creator Eben Upton has told IT Pro that it'll be a long while before the Pi 4 comes out.