Packs in a lot of features, from HDR10 support to full sRGB and Adobe RGB calibration but there are a fair few flaws, too 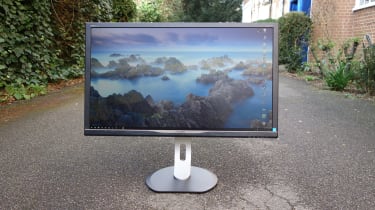 HDR (or High Dynamic Range) has been a hot topic in TVs for a while now, but it's only just beginning to gain momentum elsewhere. These days, however, everyone is looking to use HDR to enhance the viewing experience.

From phones and laptops with HDR-capable screens, to streaming service providers such as Netflix and Amazon - HDR is everywhere, including the Philips 328P6AUBREB, which is one of the few HDR-enabled PC monitors around.

We'll go into the 328P6AUBREB's HDR capabilities further down, but suffice it to say this is an impressive beast of a monitor. It measures 31.5in across the diagonal, has a resolution of 2,560 x 1,440, it's pre-calibrated to Adobe RGB and sRGB, has impressive colour accuracy, fantastic build quality, handy USB-C connectivity and comes in at just 439 after tax.

Sound like the perfect monitor? Well, almost. It suffers from poor brightness uniformity, which means it won't be the ideal screen for everyone, and Windows 10's HDR support isn't universal just yet, either.

Most Philips monitors we've seen recently have been fantastically well made and attractive to look at, and the 328P6AUBREB is no exception. Its "SmartErgoBase" stand provides -5 to 20 degrees of tilt adjustment, 180mm of height adjustment, and 340 degrees of total swivel, which is about as flexible as monitor stands get. Oh, and it's also possible to spin the screen 90 degrees and view it in portrait mode if that's the way you roll. 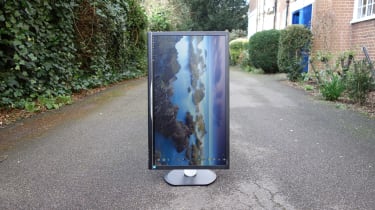 As for connectivity, Philips gives you a host of options to choose from here as well. There's a Type-C input supporting USB 3.1, meaning it will carry data, video and power to and from your laptop, tablet or phone. There's also an old-school VGA input, plus DisplayPort 1.2, HDMI 2.0, and 3.5mm headphone and aux in jacks. An Ethernet port and two USB 3.0 Type-A ports round off the physical connections.

The OSD (on-screen display) is as comprehensive as the monitor's connections and provides a flurry of options to choose from, including the pre-calibrated Adobe RGB and sRGB colour profiles and LowBlue Mode, which is used to reduce eye strain.

If you want the monitor to display HDR content, though, you'll have to use the HDMI 2.0 port, as the other sockets on this particular monitor don't carry an HDR signal. This is a limitation if you want to watch HDR content on both your games console and Windows 10 PC.

The monitor has a 31.5in, 2,560 x 1,440 IPS panel that runs at a refresh rate of 60Hz. Since it's an HDR monitor the panel is 10-bit as well, which means you should see a richer, more vibrant range of colour with HDR-compatible content such as 4K Blu-rays and some Netflix movies and TV shows.

It's also one of the most colour-accurate monitors we've seen. Tested with our in-house i1 DisplayPro colour calibrator, the Philips returned an average delta-E score of 1.09 and has a decent contrast ratio of 1,271:1 as well. By comparison the Samsung CHG70, which has a VA panel, achieved a delta-E of 1.75 and a contrast ratio of 2,524:1. 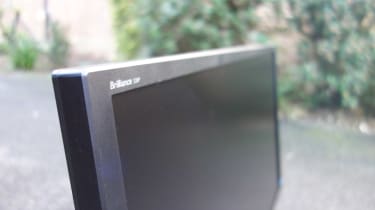 I was disappointed with the sRGB gamut coverage, though, which I measured at a lowly 89.7%. The monitor's Adobe RGB gamut coverage is far more impressive at 91.1% and colour accuracy improves a touch in Adobe RGB mode, too, with the average Delta E dropping to an even more impressive 0.87. Just shy of 500cd/m at peak brightness, the monitor is plenty bright in SDR, too.

The monitor's biggest flaw, however, is its brightness uniformity. With a variance of up to -20% in corners from the centre of the display, the Philips isn't particularly consistent. The variance is so great, that we even noticed its ill effects whilst looking at our desktop wallpaper. If you're a professional photo or video editor, this is a dealbreaker.

The key selling point for this monitor, however, isn't its photo-editing capabilities, but its HDR support. You turn this on by setting it to Auto in the on-screen display and it worked flawlessly with the apps we tried with HDR support.

As ever, though, by enabling HDR within the Windows display settings, the OS then misinterprets the colours in everything non-HDR related, resulting in washed-out colours on the desktop and any app that doesn't support the standard.

It's important to note that this has nothing to do with the monitor, but rather Microsoft's implementation of HDR. As it's still relatively new on Windows 10, HDR is still hit and miss. Amazon Video and YouTube, for example, don't support HDR content through the browser, meaning the only way to watch their HDR content is via your TV, a streaming stick or a console. 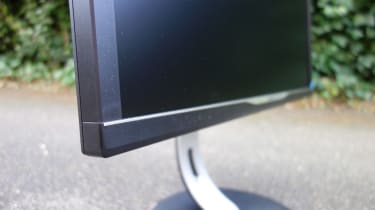 Netflix does support HDR through the browser, but there's a specific set of requirements to get it working. You'll need a 7th-Gen Intel processor and an Nvidia GTX 1050 or above, so our 3rd-Gen Intel Core i7 3770K and Nvidia GTX 1080 Ti combo isn't supported.

There aren't many monitors around with the same blend of features offered by the Philips 328P6AUBREB and with HDR, a colour-accurate QHD panel and a stunning build quality, the Philips 328P6AUBREB is a top quality monitor. If you want a do-it-all screen that will cope with office tasks, HDR video and a little design work on the side, it's worth considering.

It is, however, quite pricey, and with Windows 10 still in its infancy when it comes to HDR compatibility, you might want to hold off on a purchase, especially at 439. With so many non-HDR alternatives costing a fraction of the price, the best value monitors currently lie elsewhere.

There aren't many monitors around with the same blend of features offered by the Philips 328P6AUBREB and with HDR, a colour-accurate QHD panel and a stunning build quality, it's a top quality monitor. It is, however, quite pricey, and with Windows 10 still in its infancy when it comes to HDR compatibility, you might want to hold off on a purchase.