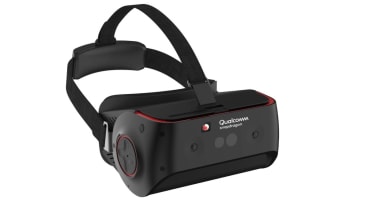 Qualcomm has unveiled a new virtual reality (VR) reference design based on its latest mobile chip, the Snapdragon 845.

Called the Snapdragon 845 Mobile VR Platform, the new system will use the firm's latest mobile chip to power new features like foveated rendering and room-scale tracking.

Qualcomm said it has been developed to "fuel next-generation VR experiences", featuring a variety of new architectures and subsystems engineered to deliver "one-of-a-kind experiences that blur the lines between the physical and virtual worlds".

Building on the Snapdragon 835 Mobile VR Platform, which powered VR devices at this year's CES exhibition, Qualcomm said the new edition will also be 30% faster and use 30% less power than the Snapdragon 835 version. The company will once again team with Chinese acoustic components company GoerTek to allow global manufacturers to quickly build commercial designs based on the new chip platform.

"We continue to deliver new advancements in technologies for our customers to utilise as they aim to capitalise on the growing standalone and smartphone VR industry," said Qualcomm's head of virtual and augmented reality business group, Hugo Swart.

"With the Snapdragon 845 Mobile VR Platform, we're supporting the next wave of smartphone and standalone VR headsets for our customers and developers to create the immersive applications and experiences of the future."

Qualcomm will be using its Hexagon DSP tech to boost power improvements on the new platform, it said, achieving a high-quality VR experience with low latency, high frame rates and smooth head tracking performance.The fresh system will use Qualcomm's latest Adreno 630 visual processing subsystem to achieve this, offering integrated graphics, video and display processing tech, resulting in what the company said will be twice as much display throughput compared to the Snapdragon 835 Mobile Platform.

"The Snapdragon Mobile VR Platform lends itself to highest possible level of performance to meet the high computing demands of the standalone VR product category," added the firm's VP of business development for Oculus and Facebook, Ash Jhaveri.