Samsung gives its thin-client solution a flawed but promising update 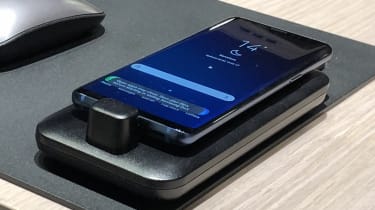 While the launch of the Galaxy S9 may be hogging all the attention, Samsung has also announced another, potentially more interesting, product. We're talking, of course, about its redesign of the DeX desktop dock-originally launched alongside the Galaxy S8 last year - adding a handful of cool new features and making it much more useful and versatile.

Last year's DeX Station was a squat cylindrical pod, with a lid that slid out to form a stand that the S8 slotted into. With the new model, however, Samsung has changed the design somewhat. The new DeX is a flat pad which the S9 sits on top of, connecting once again via USB-C. It's almost 100g lighter too, weighing in at just 134g.

Aside from being more space-efficient than the previous model, it also means the phone is lying flat when being used in DeX mode, which is where another new feature comes into its own. If you don't have a mouse connected to the DeX Pad, you can actually use the S9's screen as a trackpad, which is a surprisingly nifty feature and works really well.

The DeX is firmly positioned as a corporate device, and Samsung has beefed up its enterprise capabilities with some new features, including the ability to apply corporate IT policies to DeX units, whitelisting and blacklisting the use of certain apps. You can set the DeX up to use your corporate branding too, so it automatically uses your logo and art assets as the wallpaper whenever it's in desktop mode. 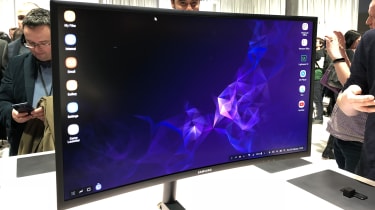 The resolution is higher as well. The original DeX Station only supported 1080p monitors, while the newer DeX Pad supports monitors up to QHD. The ability to support multiple resolutions is also new - the old unit simply scaled the size of the UI elements to fit the monitor.

As with the previous DeX Station, certain apps (such as Microsoft's Office apps and virtual desktop solutions from providers like Citrix and VMware) will launch into a specially-formatted desktop mode, while others will simply launch as windowed Android apps.

There's enough apps that are DeX-compatible to do basically any office task the average worker will need to perform, and the S9 copes well with multi-tasking in DeX mode. Even with several reasonably demanding applications open, we didn't notice any slowdown or performance issues.

There have been a few unfortunate compromises made as part of the redesign, however. First and foremost, the number of available ports has been trimmed down a little; whereas the original DeX Station had two USB 2.0 ports, a HDMI port and an Ethernet port, the new Pad has lost the Ethernet connection. 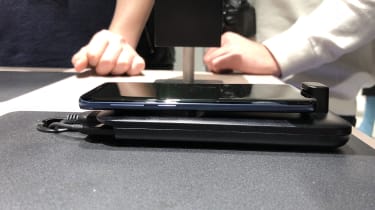 We're also aggrieved to see that it's still lacking a proper Thunderbolt 3 port, which would allow the DeX to take advantage of power, data and display transfer. While it's got a USB-C port, it's reserved for powering the device, rather than providing extra versatility.

Another issue is that the new DeX Pad is apparently only compatible with the new S9 and S9 Plus. Samsung has promised that backwards compatibility with previous devices such as the Galaxy S8 will be coming at a later date via a software update, but the fact that it's not immediately compatible with devices that have already been deployed in many businesses is a disappointment.

Despite a handful of unfortunate wobbles such as a lack of backwards compatibility and the removal of the Ethernet port, the Samsung DeX Pad adds enough useful features and tweaks to make it a worthwhile investment for businesses.

If you're a CIO who is planning to deploy the Galaxy S9 as your corporate device, the DeX Pad makes an excellent thin-client device for busy mobile workers who don't need a huge amount of computing horsepower, but want the productivity of a monitor, mouse and keyboard setup. When Samsung adds support for older devices, it'll be a no-brainer.