Dell Precision 5820 review: A solid all-rounder, but it’s not cheap 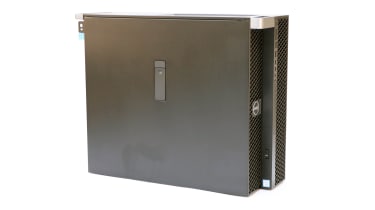 There's no such thing as 'one size fits all' when it comes to business IT hardware. While one business may need simple machines to run the simplest of tasks (such as sending and receiving emails, the ability to create and view documents and run little other software), other businesses and even departments may need something to deal with more intensive tasks.

Take, for example, the graphics and design industry. The admin side can be handled by standard machines but when rendering, 3D modelling and video editing comes into play, something more powerful may be required.

When the standard MacBook Pro starts struggling, it's time to start looking for a more robust piece of kit. Although you could go down the route of the super PC, such as the Scan 3XS WI6000 Viz or the PC Specialist Axiom, there are alternatives that offer a decent power upgrade, with a lower price point.

One such machine is the Dell Precision 5820, an entry-level workstation that has been designed specifically to handle tasks that have outstripped the standard, consumer PCs, but aren't quite on the same level as the aforementioned computers. It's built to deal with "moderate-to-high intensity" for businesses that are running out of capacity with their standard machines, such as design agencies, graphics professionals, video editors and can handle everyday activities seamlessly.

The model on test is a relatively basic spec as far as workstations go no sign of a dual-socket CPU or twin graphics cards here but it's highly configurable at the point of purchase, maxing out with a 14-core Xeon W processor and twin professional-grade GPUs courtesy of either Nvidia or AMD. There's also plenty of scope for expanding and upgrading it in-house, in case your needs evolve over time.

The beating heart of this workstation is a quad-core Intel Xeon W-2125, which runs at a nominal 4GHz but with a top 4.5GHz Turbo Mode for one core. Although this is a quad-core processor, it supports Hyper-Threading, so presents eight threads, for improved rendering abilities. This CPU is from the Skylake-W range, and close to the bottom of that range, but offers high single-core frequencies that will be good for modelling software. 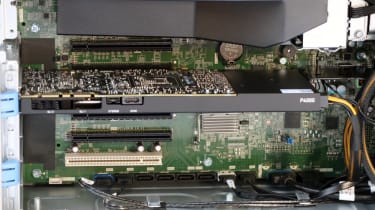 The processor has been partnered with 16GB of 2,666MHz DDR4 SDRAM, which is a reasonable starter amount, but surprisingly supplied as two 8GB DIMMs. This does leave six DIMM slots free for upgrading to the system's maximum of 256GB. But it also doesn't take advantage of the quad-channel memory architecture of the Xeon Skylake-W. Although Core i7 Skylakes use a dual-channel controller, the Xeon W version has twice as many channels, for twice the bandwidth, and you will miss out on that with this configuration.

However, the graphics provision is very sensible for the rest of the specification, which is aimed at mainstream modelling and design work. The Nvidia Quadro P4000 is currently the most popular high-end professional graphics card for everyday content creation tasks. This is from NVIDIA's Pascal GPU generation, and boasts a hefty 1,792 CUDA cores, delivering up to 5.3 TLOPS of 32-bit single precision floating point performance.

The P4000 also includes a healthy 8GB of GDDR5 memory on a 256-bit bus, capable of 243GB/sec bandwidth. Yet despite these powerful specifications, the P4000 only consumes 105W, so it can provide a lot of modelling ability whilst remaining relatively eco-friendly.

As with the rest of the specification, our 5820 sample comes with an entry-level storage allocation. The 512GB capacity will be enough for the operating system and everyday applications, but heavy data requirements such as video editing would require further storage provision, either on the workstation itself or connected via high-speed networking.

On the plus side, the main storage is in the form of a Class 40 NVMe Solid State Disk, which will be very quick to load your software. Running CrystalDiskMark 6, this drive delivers 3,105.7MB/sec reading, which is closest to the best, but 457.3MB/sec writing, which is slower than some faster SATA-connected SSDs.

Other than the warranty and support backing provided by a huge company like Dell, one of the reasons to buy a workstation from this company is the design of the chassis, which will have been specifically oriented towards the intended use. The 5820 chassis is extremely easy to open, using a catch on the side panel, although a tab at the rear allows this to be padlocked shut. The interior is efficiently laid out, with tool-free access to many components. 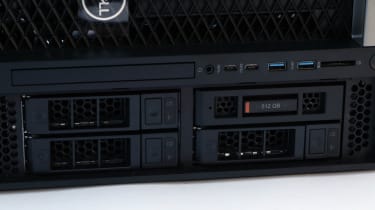 The four front-accessible drive bays sit behind a plastic grille that is released to pivot out with the press of a switch. These are 3.5-in bays with quick-release caddies, although one contains the NVMe SSD, whilst the others have SATA ports at the rear for drives to slide into. Above this are some useful ports, including a headphone minijack, two USB 3.1 Type C ports, two Type A USB ports, and an SD card reader. There's even a space for a slimline optical drive here, although this wasn't populated in our sample.

We ran a host of benchmarks on the 5820 to give a complete and thorough assessment of its performance. In our in-house benchmarks, the system achieved a decent score of 141 in image editing, a more pedestrian 154 in video editing, and relatively lowly 165 in multitasking, resulting in 157 overall. The single-core speed is good for applications like Photoshop, but with only four cores, multi-threaded tasks aren't so impressive. For example, Scan's 3XS WI4000 Viz, with a six-core processor, manages 278 overall in our Media Benchmarks.

Similarly, as a system for rendering 3D, our 5820 sample is merely mediocre, with 940 in the CPU portion of Maxon Cinebench R15, where the Scan system manages 1,559. The Dell workstation's processor cores run fast at 4GHz, but there are only four of them, and even Hyper-Threading can't make this system an ideal one for more than a quick test render at preview resolutions. The GeekBench 4 CPU score was similarly as expected for a quad-core processor at this frequency, with 5,240 in the single-core testing and 18,228 in the multi-core portion. 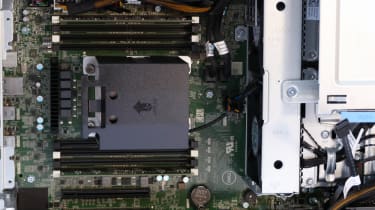 In GFXBench 4, the P4000 only managed 1,425.08 frames onscreen, but 14,992.5 frames offscreen in Car Chase, and just 964.289 frames onscreen but 21,216.6 frames offscreen, implying that it's not very well optimised for this test. Nevertheless, modelling is where this system sits most comfortably, and that is reflected in its SPECviewperf 12.1 scores.

The result of 131.14 in 3dsmax-05 is on par for a Quadro P4000, around the same as the Scan system, which has identical graphics. Likewise, 109.84 in maya-04 is on par with Scan. So this system would be good for 3D modelling for animation, and 168.13 in sw-03 shows strong abilities in the popular SolidWorks product design application.

Overall, the P4000 performs well in a broad range of engineering, product design and content creation applications. The Precision 5820 will be a great tool for any of these types of modelling work. Similarly, the result of 180.34 in the OpenGL portion of Maxon Cinebench R15 confirms this system's abilities when animating 3D with Maxon Cinema 4D, although we have seen faster results, with Scan managing 226.95. 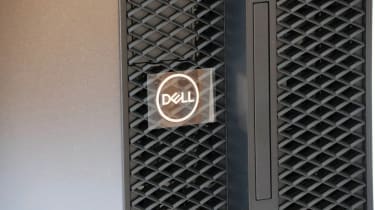 The graphics provide plenty of benefit available for GPU-powered rendering. The LuxMark 3.1 result of 3,149 is very good, as we expect from a Quadro P4000, showing strong OpenCL performance. Similarly, OctaneBench 3 produces a score of 104.26, which implies strong CUDA capabilities, and on par for the number of cores available on the P4000.

The Dell Precision 5820 is a relatively quiet workstation in operation, and the configuration we were sent consumed less than 200W even when under heavy load. However, it's a distinctly middle-of-the-road machine in many ways; it's worryingly expensive compared to some of the competition, and the performance it offers isn't really as good as it needs to be in order to justify its price.

Nevertheless, it's a well-constructed, solid workstation with excellent design and content creation abilities, and sure to find favour in larger agencies and media companies.