The Acer S277HK serves up 4K with style – but is there any substance? 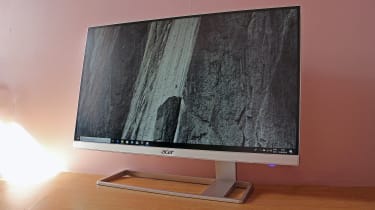 Not many 4K monitors look as striking as the Acer S277HK. This 27in panel has a bezel that's barely visible, and it sits on a wide, hollowed-out stand that connects to the screen with an off-centre slab of metal.

The Acer won't look out of place in the most stylish of offices, and it has a 4K IPS panel beneath so it'll hopefully bring the goods when it comes to image quality, too.

We like the sound of a 4K IPS screen on paper, but benchmark results returned middling figures.

The Acer's brightness level of 216cd/m2 is underwhelming for a monitor that costs more than 600 the Samsung CF791 hit 315cd/m2 while the Philips 328P6AUBREB fell just short of a mighty 500cd/m2. While the Acer's brightness measurement is ample for the average office, it'll still struggle under brighter lights, or in rooms with strong sunlight while the Samsung will handle those scenarios with ease.

More crucially, the Acer's middling brightness measurement is paired with a black level of 0.24cd/m2. That's not deep enough, and it means that the contrast sits at 885:1. That, again, is another figure that will cope with most office tasks, but it's also a long way behind the Samsung. 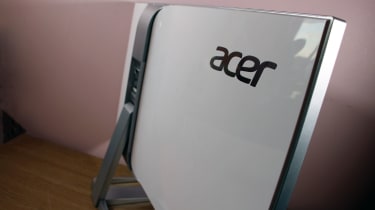 That curved screen served up a contrast ratio of 2,330:1 thanks to its VA technology so colours will be more vibrant, the screen will display a broader range of subtle shades and its dark areas will appear inkier. It's also behind the Philips, which topped out at 1,271:1.

The Acer's average Delta E of 2.02 is fine for office work and accurate enough for most photography tasks, but this is another area where the Samsung and Philips were both better thanks to Delta Es of 0.56 and 1.09.

The Acer's colour temperature measurement of 7,356K is too cool, and the Acer managed to render 91.8% of the sRGB colour gamut a step behind the 99.1% of the Samsung panel.

This screen's uniformity levels are pretty average, too. In most segments of the screen the brightness level didn't veer more than 6% away from the panel's initial result, but those figures rose to 12% and 13% on the right-hand side of the panel. That's too high for an expensive office screen where consistency may be key to photo work, video tasks or high-end design.

Some of the screen modes aren't much cop, either. The Graphics mode improved the brightness to 225cd/m2 but caused the Delta E to decline to 2.79. The Movie mode retained that Delta E level while reducing the brightness, and the sRGB mode doesn't make much difference to any of the benchmarks.

The Samsung and Philips screens may have the edge over the Acer in most benchmarks, but that's not the only thing to consider about these panels. The Acer's 27in diagonal and 4K resolution deliver a pixel density level of 163ppi. Samsung's screen has a 3,440 x 1,440 resolution spread across its curved 34in screen, and it delivers a density of 110ppi. The Philips, meanwhile, stretches a 2,560 x 1,440 resolution across a 31.5in diagonal. 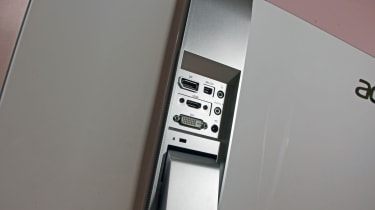 The Acer will be far sharper, then, which could be important for precise work and it has a more conventional aspect ratio, which could also be a boon for certain tasks when 21:9 will prove too narrow.

None of the Acer's test results are bad: the brightness and contrast levels are fine for most office tasks, the Delta E level is fine, and the chilly colour temperature won't prove noticeable to the naked eye. The problem, though, is the Samsung screen that curved panel is better in most tests and doesn't cost any more than the Acer.

The Acer looks the part, at least. The slim, wide stand will draw admiring glances among plainer panels, and the bezel around three of the screen's sides is barely two millimetres thick.

The bottom bezel is wider and made of brushed aluminium so that looks great, too. A blue power button sits beneath the bottom bezel, alongside the rest of the OSD buttons. They're snappy and sturdy, and the OSD itself is fine; basic and blocky when compared to Samsung's slick software, but perfectly usable.

The rear of the panel has a DisplayPort, mini-DisplayPort, HDMI and DVI connections, and it has two audio jacks. However, that aren't any USB ports, which is disappointing. The ports all face outwards, which makes them easy to reach but doesn't help keep the cables particularly tidy. 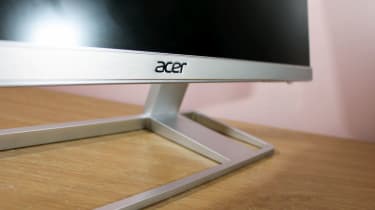 That's not the only area where the Acer doesn't offer much versatility. The screen can tilt forwards and backwards through twenty degrees, but that's it for adjustment: the off-centre stand design doesn't allow for left-to-right movement, height changes or using this panel in portrait mode.

Samsung's screen provides both height and tilt adjustments, and it has a VESA mounting kit another feature that's absent from the Acer. The Samsung also has USB ports, a cable-tidying stand and AMD FreeSync that peaks at 100Hz more extras that the 60Hz S277HK doesn't include. The Philips screen has even more adjustment and a USB 3.1 port as well as HDR support.

The Acer does have a pair of 2W speakers, at least, but they're a mixed bag. They have ample volume, but the range is utterly dominated by bass so movies and music don't sound particularly good.

The Acer delivered middling results in most of our benchmarks. It's got enough brightness and contrast to handle most conventional office tasks, and its Delta E level is similarly capable.

However, this screen is an expensive 4K panel and so we expected more. The curved Samsung CF791 and HDR-friendly Philips 328P6AUBREB are better in almost every test, and those screens also had USB ports, more syncing options and more adjustability. The Acer doesn't quite have the colour accuracy or gamut coverage to handle photo-sensitive work and other colour-related tasks but its rivals clearly do.

It may look the business, but the Acer doesn't have the quality or features to justify its price. This screen may look good and its quality levels aren't disastrous but if you're paying this much, it's easy to find something better.

Not bad in any category, but mediocre performance and a high price makes it difficult to recommend