A great system for 3D animation and GPU rendering, less so other content creation tasks 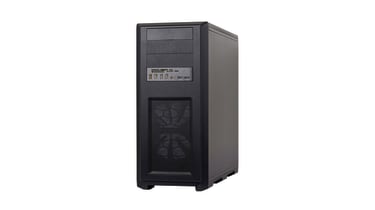 Overclockers is one of two companies recently to send us a system with consumer-grade rather than professional graphics. The argument is that professionals ask for this, particularly game developers. In the case of the Renda G3-CS, the graphics card in question is an Asus-branded Nvidia GeForce GTX 1080 Ti ROG Strix OC -- one of the speediest consumer cards on the market.

Otherwise, the G3-CS fits alongside other systems costing around 2,500 inc VAT. It's based around an Intel Core i7-8700K, although in this case the company lives up to its name by overclocking this CPU up to a blistering speed of 5.1GHz. Only 16GB of DDR4 memory has been supplied, but it's fast 3,600MHz RAM and there's potential for expansion thanks to the two unoccupied DIMM slots.

The GTX 1080 Ti graphics is potent, almost as much so as the Titan Xp in Armari's system. It boasts 3,584 CUDA cores -- exactly twice as many as a Quadro P4000. There's 11GB of GDDR5X memory on a 352-bit bus, providing 484GB/sec of bandwidth. This means there's heaps of raw grunt for graphics rendering and modelling tasks, but be warned - as it's not a professional-grade card, there's no support from software providers and no specifically-optimised drivers. 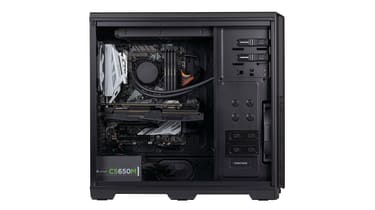 The storage selection is standard workstation fare, with the OS and applications sitting on a 512GB Samsung 960 Pro Polaris NVMe SSD, while the mass storage duties are handled by a 2TB Western Digital Black 7,200rpm SATA hard disk. These are reasonable sizes in each case. The SSD provides rapid 2.9GB/sec reading and 2GB/sec writing, whilst the hard disk is also fast, with 210MB/sec reading and 215MB/sec writing.

Thanks to the high clock speed, this was lighting-quick in our benchmarks and Maxon Cinebench rendering, compared to other Core i7-8700K chips. Whilst it was quick with the Blender render, other 8700K systems were faster -- although its GPU render was almost as quick as other, more expensive systems. It was also middling with the Adobe Media Encoder test.

Despite the hefty number of CUDA cores, the 1080 Ti graphics' lack of professionally optimised drivers means that this system doesn't excel in every area of modelling. The result of 2,045 in Cinebench R15 OpenGL is good, but not the best by any means. Similarly, with SPECviewperf 12.1, whilst this system achieved excellent results in 3ds Max and Maya, it was slower with Creo and very slow indeed with Siemens NX, as well as being positively sluggish with SolidWorks.

Overall, the Overclockers Renda G3-CS would make a great 3D animation workstation. But it's not so suited to engineering and product design, and merely average for video production. If you need an all-round performer, you're better off investing in something with a professional card.

The Overclockers Renda G3-CS would make a great 3D animation workstation. But it’s not so suited to engineering and product design, and merely average for video production. If you need an all-round performer, you’re better off investing in something with a professional card.