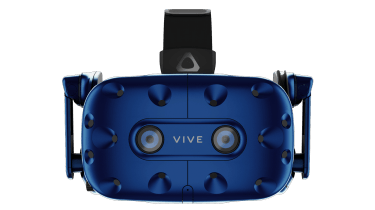 Two years have now passed since the launch of the HTC Vive spurred many into excitedly declaring that the future of computing had arrived. Unfortunately, the sci-fi VR future we were all dreaming of has yet to materialise, but HTC hasn't given up on the technology just yet - it's now launched the Vive Pro, a new and improved headset aimed at business users and early adopters who need that little bit of extra polish.

Upon first glance, the Vive Pro looks even more bulky than the original Vive. In addition to the actual visor that sits in front of your eyes (which is if anything very slightly bigger), the Vive Pro features built-in headphones and a solid plastic headband with a chunky weighted section at the rear that houses part of the mechanism for adjusting the headset's fit.

On paper, this sounds like a step backwards - the Vive wasn't the sleekest piece of hardware to begin with, so making it even more bulky seems counterintuitive to say the least. However, it actually has the effect of making the Vive Pro noticeably more comfortable than the Vive.

This is partly because the plastic headband allows for more padding and a greater level of ergonomic design than an elastic strap, but the main reason that it's so much more comfortable than the Vive is that the weight is much more evenly distributed.

The weighted section at the back of the headband acts as a counterweight to the solid lump of plastic and circuitry attached to your face, balancing it out and ensuring that the weight is being supported by your whole body rather than just your neck. This is remarkably effective in making the whole kit and caboodle feel much less bulky and unwieldy than the first Vive, despite being noticeably chunkier. Wearing it for long periods wasn't a particular strain, and we had no issues with soreness or fatigue.

HTC has given the Vive Pro a high degree of adjustability, too - something that was somewhat absent from the first revision. Not only does the new headband allow for a much more precise fit around the back of the head, the front of the visor also allows you to adjust how far away from your face the lenses are for a greater degree of comfort.

It's still not quite foolproof; we found ourselves intermittently fiddling with the interpupillary distance, the position of the visor and other settings in order to try and get a slightly clearer picture. It also has to be said that it still makes you look more than a little goofy while you have it on - which is not helped by the fact that HTC has added an extra camera lens to the front of the headset. This is used by the chaperone mode to map out the playing area, but it gives the impression of a great big pair of googly eyes on the front of the device, which are more than a little reminiscent of Short Circuit's Johnny 5.

Overall though, we found it to be much more comfortable than the original Vive, and we're inclined to place the blame for any issues with the headset on our awkwardly-shaped glasses and poor vision rather than the headset itself.

While some areas have been beefed up and augmented, one thing that has been slimmed down and streamlined is the Vive Pro's cables. Rather than the multiple snaking wires that connected the old Vive to the PC powering it, the Vive Pro connects with just one slim cable, and even better, there's a loop on the back of the headband to ensure it goes down the user's back, rather than awkwardly hanging down in front of them and becoming a tripping hazard. 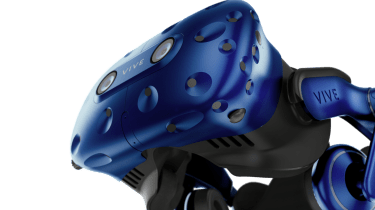 Speaking of which, it must be said that the upgrades HTC has made to the Vive Pro's display and optics - upping the resolution to 2,880 x 1,600 across both eyes for a PPI increase of 37% - have made a noticeable difference. The Vive's display wasn't low-quality by any means, but the new higher resolution makes the original screen look and feel noticeably sub-optimal.

It also ensures the first Vive's slight 'screen door' effect (where you can see the lines separating the individual pixels) is conspicuously absent on the Pro. As a result, the experience of using the Pro feels noticeably more immersive and high quality.

In fact, overall performance is excellent. We had no issues with tracking - something that was an occasional problem with the original Vive - and the frame rate was absolutely faultless. We were zipping around in Doom with zero disorientation, motion sickness or stuttering. Admittedly, this is largely dependent on the PC that's powering the headset, but the display itself still plays a part, and it's nice to see that the overall experience is still so high quality, although the refresh rate of the display hasn't been improved from the Original Vive's 90Hz figure.

Immersion is further improved by the new nose-flaps that HTC has added, which adapt to the contours of your nose to slop light bleeding in from the bottom of the headset. It's a small detail, but again, one that makes a surprisingly large difference.

Audio is important in VR, which is why HTC has chosen to incorporate a pair of on-ear headphones into the Vive Pro's headband. These are articulated for easy adjustment and positioning, support high-definition audio, and also have built-in volume and mute buttons for easy control. We would have preferred over-ear headphones, as they provide a better seal for passive noise-cancelling, but these earphones still offer rich sound, with good 3D audio capabilities allowing them to simulate sounds coming from various positions around you. 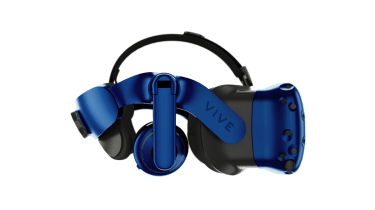 One neat feature is that the Vive Pro uses its integrated microphones in conjunction with the headphones to provide active noise cancelling to keep you immersed in whatever you're doing, and HTC says that it also has a form of hazard awareness. If the microphones detect an unusual noise - such as a pet entering the room or your phone going off - the earphones shift the sound output to the back of the head, allowing you to hear whatever's going on more clearly.

If you'd rather use your own cans with the Vive Pro, never fear; you can use a screwdriver to quickly detach the built-in earphones. You can then connect your own headset via USB-C, although you may need an adapter to do so.

For 799, the HTC Vive Pro isn't terribly cheap, but it's not aimed at the average user. It's very much a professional-grade device, aimed at design studios, architecture firms and other creatives who require the absolute pinnacle of VR technology.

However, if a lot of the Vive Pro's features sound familiar, they should; the new headset is very similar in design and functionality to the Vive Deluxe Audio Strap, which the company launched last year as an aftermarket accessory to improve the Vive's ergonomics. Many of the Vive Pro's best elements - such as the integrated headphones, balanced weight distribution and improved cable management - were first seen on the Deluxe Audio Strap.

If you're an existing Vive owner, HTC has you firmly in mind. The Vive Pro is compatible with all of the Vive's existing peripherals (both optional and required) and the company is selling the Vive Pro as a standalone unit with no controllers, base stations or accessories included, in order to allow early adopters to pick it up without forcing them to re-buy equipment that they already own.

Unfortunately, it's still a poor value-proposition. There are some improvements made to the headset itself, like the enhanced resolution, more manageable cables and more adjustable visor, but they're the only features that are actually new.

While they're definitely nice to have, they're not worth shelling out this much money to own, especially considering that the original Vive has now dropped in price to 500. Add on the 100 price of the Deluxe Audio Strap and you'll be able to take advantage of most of the functionality and comfort of the Vive Pro for roughly 200 less. Unless you want to do high-precision graphics work that requires the absolute bleeding-edge maximum in visual fidelity, the Vive Pro can't justify the price of admission.