Huge and expensive – but can this panel possibly justify its price? 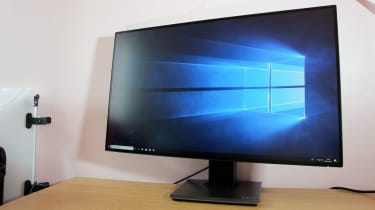 The ProDesigner PE320QK may be expensive, but Acer is hoping to justify the cost in several key ways. For starters, the firm promises exceptional image quality that'll sate designers, graphic artists and other people who work in colour-sensitive roles.

Acer also touts the ProDesigner's good looks and versatility, and the specifications even suggest that it'll handle some gaming. But can the PE320QK possibly be worth 750 exc VAT?

Acer's panel stretches a 4K resolution across a 31.5in diagonal, which means a density level of 140ppi. That's high enough to make graphical work look sharp, but you'll need to employ Windows 10's scaling settings to get the most out of it. Still, that's no hardship, as those options work impressively these days.

The panel is a 10-bit IPS screen with a 60Hz refresh rate and a 4ms response time. Those are well-rounded attributes for an office panel, and Acer goes one further by including AMD FreeSync - a feature also found on the Samsung CF791.

That latter inclusion means that video tasks will look buttery-smooth on this screen - but it also bodes well for some after-hours gaming, too, as long as you don't expect to be competitive in fast-paced shooters.

Our initial impressions suggest that Acer has backed up the good specifications with great quality. With its brightness dialled down to a reasonable 120cd/m2 the Acer delivered a stunning black level of 0.08cd/m2 - and those figures combined to produce a superb contrast ratio of 1,500:1.

The Acer followed up those figures with a superb colour temperature of 6,581K and a fantastic average Delta E of 0.14. Each one of these screens is calibrated by Acer at the factory, and our results match those provided by Acer. They're excellent: the former result barely differs from the 6,500K ideal, and the latter figure is one of the best we've ever seen, and well within the margin where the human eye can't detect any deviations. The gamma measurement of 2.12 is fine too, if a little more wayward. 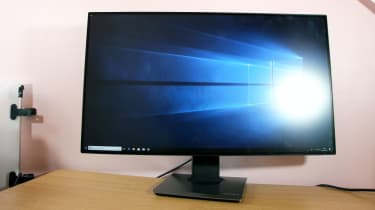 With the Acer's default brightness level restored the backlight beamed out at 300cd/m2, with the black level at 0.21cd/m2. That created a contrast ratio of 1,428:1 - still good, but a tad poorer than in the previous test.

With the brightness at the default level the colour temperature and Delta E figures worsened a little, to 6,741K and 0.22. Those figures became slightly worse when we ramped the brightness up to 100%, where it hit 352cd/m2.

Nevertheless, these figures outpace most other screens in most tests. The Samsung CF791 is a widescreen panel with a slightly poorer Delta E and a peak brightness of 315cd/m2 but a contrast level of 2,300:1 thanks to its VA screen technology. The Philips 328P6AUBREB is more affordable, at 366 exc VAT, and it shows: it's Delta E of 1.09 and contrast of 1,271:1 are both poorer than the Acer, and its sRGB coverage level of 89.8% was worse.

A slight issue here, at least using the Acer's conventional settings, is that it delivered an sRGB gamut volume of 140.3%. That's too high, and it means colours may look a little oversaturated - not good for colour-sensitive work. Thankfully, switching to the Acer's sRGB mode saw its volume level drop to a reasonable 95.2%, although here the coverage level also dropped to 94.5%. On balance, though, that latter mode is better for intricate colour work.

The Acer comes with several other alternative screen modes, but they're a mixed bag. The HDR mode upped the brightness but made the colour temperature poorer, and the Acer doesn't have local backlight dimming - so it can't achieve the contrast required for true HDR anyway. We've already seen that the sRGB mode improves the gamut - but it moved the colour temperature to 6,301K.

Elsewhere, Graphics mode ramped the temperature up to 7,072K and worsened the Delta E to 2.08, and Movie mode returned similar results. As ever, you'd be better off relying on the Acer's Factory or sRGB modes - or tweaking the settings yourself. 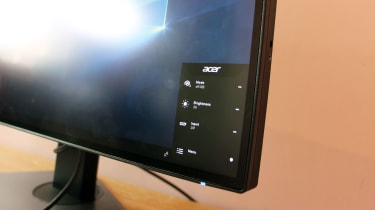 If there's one slight weakness, it's uniformity. The backlight's strength weakened by around 17% in some sectors on the left-hand side of the screen, and the average backlight deviation was around 11%. That's the sort of result we'd expect from a budget screen - not a high-end professional monitor.

Nevertheless, there's a lot to like about the Acer. It's got excellent contrast, brightness and black points, and its Delta E measurements are superb. Colour temperature is good - even if it veers to either side of 6,500K depending on which mode you're using - and its high sRGB gamut volume is easily fixed.

The uniformity is a slight issue, but this screen remains one of the best we've seen, and its image quality will sate the vast majority of professionals. The only people who will need more accuracy are likely those who will be working with Adobe RGB.

The Acer looks great, with a slim bezel and a smart plastic stand. The stand's width of 248mm is modest, which means this screen is relatively easy to place on a desk, and its weight of 8.07kg is manageable. A cut-out in the stand can also be used to route cables tidily.

The smart design is paired with loads of versatility. The screen can tilt and has height-adjustment, and it supports VESA mounting. Impressively, it rotates into portrait mode in both directions, and every movement feels reassuringly smooth. The adjustability options outstrip the curved, widescreen Samsung, and match the Philips 328P6AUBREB.

Elsewhere, an anti-glare hood is included in the box, and the four USB 3.1 ports are divided between the back and sides of the panel. There's a headphone jack, and two 4W speakers - although quality isn't brilliant. The Samsung CF791 was much better in the audio department, and the Philips had better connectivity - even boasting an Ethernet port.

The Acer connects with two HDMI 2.0 ports and a single DisplayPort 1.2 socket - all that's required when this screen delivers 4K at 60Hz. 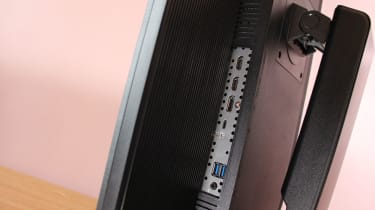 Acer's on-screen display is controlled by a joystick and a trio of buttons on the rear of the screen. The OSD is small, smart and easy to navigate, with sensibly-organised menus and plenty of options.

The three buttons are used to quickly switch between modes, inputs and brightness levels. They're a little awkward to use at first - the power button is above those buttons, and we kept hitting it by mistake - but it's something you'll get used to.

The Acer is expensive, but it amply justifies its price with great performance in many key areas. Its contrast, black point and Delta E are among the best we've ever seen from a professional IPS screen, and colour temperature is consistently good. It handles several different colour gamuts, and the resolution and refresh rate both bode well for work and play.

The Acer is versatile, too, with a good port selection and plenty of adjustability options. The only issues are the slightly wayward uniformity and some of the screen modes, which improve certain settings at the expense of others.

Still, if you need a large, accurate monitor for colour-sensitive work, you could do a lot worse. The Acer ProDesigner PE320QK is more expensive than its rivals, but we can see why.

The Acer isn’t without flaws, but it still delivers excellence in most of the important areas – which makes it a tempting high-end choice