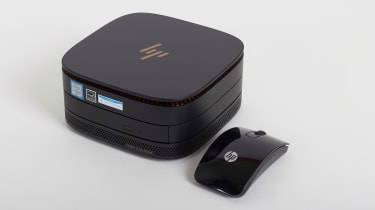 Many organisations are using the fact machines are becoming smaller and faster as a good excuse to modernise their workplaces, junking their old, bulky desktop machines in favour of sleek, new devices that can offer the same performance whilst radically reducing the amount of space they need. This goes hand-in-hand with agile working, where thin-client and VDI systems help businesses do away with having workstations for individual employees and instead allow them to start work at any terminal.

HP has been one of the quickest vendors to jump on this trend, and has designed much of its 'Elite' business range to cater to these kinds of use-cases. Enter the HP Elite Slice: a mini-PC that promises the power of a desktop in a teeny-tiny package roughly the size of a generously-filled sandwich.

This is a business PC through and through, which means you get Windows 10 Pro instead of Windows 10 Home, and security features like built-in drive encryption. Performance has also been prioritised with both an 256GB NVMe SSD for faster booting and application loading and - rather than a mobile processor like many other mini PCs favour - a quad-core, 2.5GHz Intel Core i5-6500T. Don't expect the same kind of horsepower as the standard Core i5-6500, though; the 'T' suffix indicates that some speed has been traded off for lower power consumption.

That's included in the base system, but the Slice has a trick up its sleeve. It's a modular system, meaning you can purchase additional hardware to attach to it - literally bolting on extra functionality. 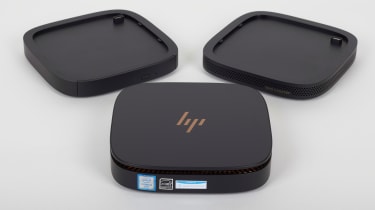 Well, we say bolting; in truth, the additional modules clip seamlessly onto the bottom of the device and connect via a physical port. They're the same shape and design as the machine itself, so a Slice with a few added modules retains the elegant, matte-black look of the original. The modules themselves are also quite thin, so don't worry about creating an ungainly stack.

The catch is that there are only three modules currently available, two of which were included in our review kit (the missing one was a VESA plate, for mounting the Elite Slice to the back of a monitor). Specifically, we got the Bang and Olufson Audio Module, which adds three-way speakers and a dual microphone array, and a DVD R/W drive.

Although the former still isn't much better than your average laptop speakers in terms of warmth and depth, it's great for voice calls, which is good for businesses that want to use it for conference calls and the like. This also fits very nicely with the Collaboration Cover, which is not another clip-on module, but instead replaces the PC's top panel with one that includes capacitive buttons for calling, muting the microphone, raising and lowering volume and hanging up. There's great synergy between this and the Audio Module, which is perhaps why HP sells them in a bundle.

The disk drive is less useful. If your business still relies significantly on optical media for some reason, we can see this being an asset - but frankly, we can't imagine it's going to be much of a draw given the boom in both high-capacity removable drives and cheap cloud storage platforms. 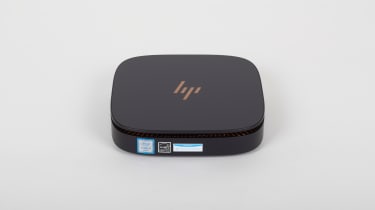 On the other hand, you'll be paying a lot if you want all that functionality. The closest we could get to our test spec starts at 1,150 for the Elite Slice, the Collaboration Cover, and the Audio Module, with the Disk Drive Module adding another 66, for a total of 1,216. Alternatively, you can get the vanilla Elite Slice (with the same internal specs but no Collaboration Cover) for 1,040, then add the two clip-on modules for a grand total of 1,177.

In any case, this is one very expensive mini-PC indeed - for less than 100 more, you can get yourself an entry-level MacBook Pro. Performance is, at least, high enough to justify the cost; it completed our 4K benchmarks without incident, scoring 91 in the image test, 84 in the video test, 36 in the multitasking test and 61 overall.

While those results aren't class-leading (it is using a two-generation-old processor, after all) it's still out in front of many mid-range laptops. It's also more than enough to power even demanding business applications - we'd even go so far as to say that a little light photo editing wouldn't be off the cards with this machine. It should be noted, however, that this performance is still way behind what you'd get if you spent an equivalent amount on a proper desktop tower.

Connectivity is pretty good, too. There are two full-size USB3.1 ports, but you also get both HDMI and DisplayPort outputs, an Ethernet port, and two USB Type-C ports. In an ideal world, we'd have preferred a few more, but it's easy enough to supplement this allocation with a dock. Handily, there's also a wireless mouse and keyboard set in the box, which can share a single USB receiver, but you'll likely want to substitute your own as neither are particularly responsive or comfortable to use. 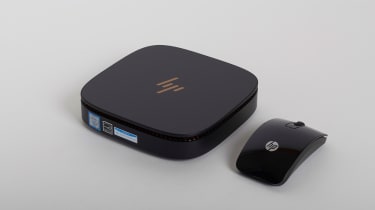 However, while the 256GB SSD is fast, it's awfully low-capacity to serve as your main drive. Most businesses which are looking at deploying the Slice will likely be relying on cloud storage or a NAS drive to handle most of the storage duties, but if you do need a bit of extra space, opening up the Elite Slice grants access to an empty 2.5in drive tray, which can hold either an SSD or compact hard disk. Two M.2 slots are also accessible, though these are already occupied by the main SSD and an 802.11ac Wi-Fi card.

The HP Elite Slice isn't exactly the cheapest device around, given that the base unit costs more than 1,000. However, what it lacks in affordability, it makes up for in performance and versatility. It's robust enough to act as an all-purpose workstation for the vast majority of business users, and the extra functionality offered by the add-on modules is just the icing on the cake - even if we wish there were a few more options available.

For space-conscious businesses with money to spare, this mini-PC is an excellent choice, especially if they're looking to move towards agile working. It's not perfect, but it's a very impressive machine nonetheless.

The HP Elite Slice may not be the smallest, fastest or cheapest machine around, but it’s an accomplished enough all-rounder that it makes a great device for businesses looking to move to agile working - especially given the smart modular functionality.