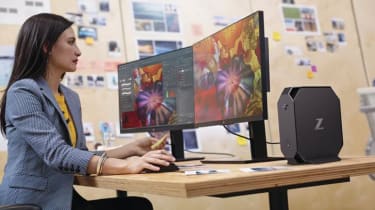 HP has unveiled what it's described as its "most powerful entry workstations" in the form of the Z2 Mini G4, Z2 Small Form Factor (SFF) G4 Workstation and Z2 Tower G4 Workstation.

The Z2 Mini G4 Workstation, as its name suggests, is the smallest of the collection, measuring 58x216x216mm. It has twice the graphics oomph of its predecessor, powered by Nvidia Quadro P600 or Nvidia Quadro P1000 GPU. It also packs in Intel's six-core Xeon processor, offering up plenty of speed for even pretty intensive applications.

Thanks to its size, businesses can stack up to 56 HP Z2 Mini workstations in a standard rack, hooking up to six displays to each via three display ports, two USB 3.0 ports and a USB C.

HP's latest SFF Workstation also stars Intel's Xeon six-core processor, but this larger desktop is all about flexibility, with the company integrating four PCIe slots, and two M.2 storage slots to up the ante and free up physical space for customised networking and I/O add-ons.

HP claims its HP Z2 Tower G4 Workstation is the world's most powerful entry workstation. Designed for intensive tasks with Ultra 3D graphics and Intel's Xeon processor, it offers 60% more processing power compared to its predecessor. HP has also taken mobility into account, finessing the computer's design so it can be easily moved between locations.

"The number one thing we hear from creative professionals and other power users is the need for higher performance PCs built to meet their needs. Our new HP Z workstation portfolio addresses this by delivering the world's most powerful entry workstations," said Gwen Coble, director of workstations, thin clients, retail solutions and immersive computing, at HP EMEA.