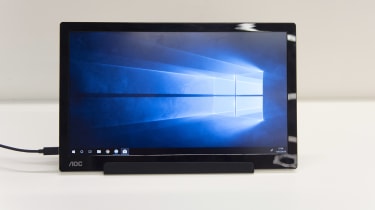 For years, workers have been caught between the portability of a laptop and the enhanced productivity of having a multi-monitor setup, forced to choose between one or the other. This is no longer the case, however.

Instead, portable monitors like the AOC I1601FWUX offer the best of both worlds, allowing mobile workers to take advantage of extra screen real-estate without having to be shackled to a specific desk. But is such a utopian dream too good to be true?

It's decidedly light on frills; there's just one button, which is used to turn it on and off and control the on-screen display (OSD). There's one USB Type-C port, which is used to connect to your laptop - no HMDI or VGA support here.

It's also used to power the screen, which draws charge directly from your laptop. There's no internal battery either, so charging it overnight isn't an option. Be careful if you're spending all day out of the office though - it's a real battery hog. In a day of average use, our laptop lost more than 60% battery in just two hours with the screen attached, which is way more than its usual rate of decline. 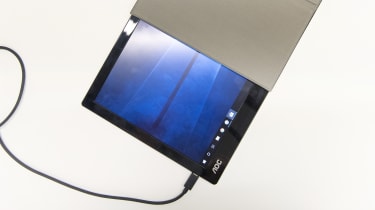 The monitor itself looks plain and unassuming - spartan, even - with an anodised aluminium rear, squared-off corners and black plastic bezels around the screen. These bezels are reasonably thick, but considering that the screen is designed to be portable, we're not especially bothered by this. It affords the screen a bit more protection and means you can pick it up without leaving greasy thumbprints on the screen.

It's actually reasonably portable as well, which is surprising considering the monitor measures almost 16in across the diagonal. Make no mistake, you'll definitely notice it's there, and carrying it around in your bag all day can get a little gruelling, but the 800g weight isn't back-breaking and taking it from one office to another is a breeze. We took it to a conference across town with minimal bother, for example.

It even comes with its own 'smart cover', which magnetically attaches to the front and doubles as a stand. The angle is fine if you're using it on a desk, but unfortunately it's not particularly adjustable, so if you're using the monitor at an awkward height, you'll be left with a rather sub-optimal viewing experience - particularly as the viewing angles of the panel itself are slightly disappointing.

Sadly, sub-optimal viewing experiences are far from a rarity with this monitor. We measured the maximum brightness at just 223cd/m2 - quite a bit below what we'd expect the average laptop panel to be achieving. The same was true of colour reproduction; the AOC covers 52.3% of the sRGB colour gamut, and images look washed-out and unsaturated.

The worst result by far, however, was colour accuracy. The average Delta E (which is a measurement of how accurately the panel displays colours) was more than 6.5 - in other words, six times more than the recommended amount. Almost all colours across the spectrum suffered in accuracy to some degree, but the blues are worst of all, with an unprecedented Delta E of more than 27 for one shade. These results are so bad that we had to re-test the display just to make sure that it wasn't a mistake. In short, for anything involving colours aside from black and/or white, this monitor is bad. 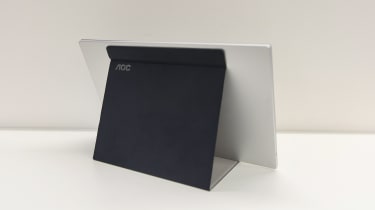 On the other hand, this is unlikely to prove a problem if all you're using it for is spreadsheets, office documents, emails and so forth. We were happily using it as extra screen real estate to host apps like email and Slack, and if that's all you're using it for, you'll likely have no complaints. However, if you're thinking of editing photos, doing any kind of design work or even just watching movies, think again; you'll be much better off sticking with your laptop's existing display or investing in a better-quality external monitor.

For example, the Asus VC239H and Acer KG221Q are excellent examples of 1080p monitors that offer much better image quality and brightness at a lower price than the AOC I1601FWUX, while even mid-range laptops generally have better displays than the one on show here.

It's safe to say that the AOC I1601FWUX is something of a mixed bag. It suffers from a rather poor-quality display panel on one hand, but it's slim and light enough to slip into a bag without too much fuss, and the simple one cable setup means you'll be up and running in seconds.

The 199 pricetag compares poorly to other 1080p monitors like the Asus VC239H and the Acer KG221Q, both of which are cheaper and better quality. On the other hand, it's not an entirely fair comparison, as you're hardly going to slip one of those in your bag when you're about pop out to a client meeting. Compared to other portable displays, like the 287 Asus ZenScreen, it's actually pretty great value.

For highly mobile workers who want a second screen for added productivity while travelling, the AOC I1601FWUX is a great buy. It's worse than useless for anything involving visual fidelity or colour accuracy, but if all you need is extra desktop real-estate, this portable monitor offers a good-value, hassle-free way to get it.

This monitor is one of the worst we’ve seen for screen quality, but if you’re not looking to do any colour accurate work, it’s portability is just enough to save it. Frequent travellers will love the option to have two screens while on the go, but if you’re doing graphical work, avoid like the plague