It’s large and stylish – but does this all-in-one deserve a place on your desk? 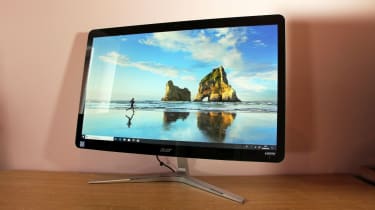 The latest all-in-one from Acer is designed to look good and capture attention - and this machine's slick design certainly succeeds. It may look the part, but we have questions about the components - and the 1,149 exc VAT price. Does this PC make the grade?

The U27 is a good-looking machine. The stand is made of aluminium and has a shiny edge that's been diamond-cut for precision, and the system itself is built from a single, slim piece of metal.

The screen is surrounded by a smart black bezel, and at the rear you've got a simple, unfussy connection between stand and screen - which sits above the speakers, an integrated subwoofer and the neat, flush power button.

The attractive Acer weighs a middling 8.5kg, and the chassis itself is sturdy. However, behind the good looks, the Acer is a little unsteady, with a noticeable wobble when the screen is tapped with gusto.

Connectivity is fine. At the rear you get a USB 3.1 Type-C port and three USB 3 connector but while there are two HDMI outputs, there's no DisplayPort. Pleasingly, the other features are solid: you get Gigabit Ethernet, Bluetooth, dual-band wireless, facial login and TPM.

On the other hand, while there's no denying that the Acer looks good, it's a little derivative. The clean lines, bare metal and black bezel are reminiscent of the all-conquering iMac, with only the wide stand offering a different design. 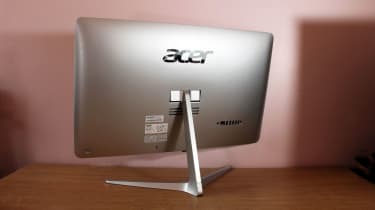 The Acer U27's key rivals look a little more distinctive. The Lenovo ThinkCentre X1 is darker and more angular, while the Acer Aspire S24 is smaller, with a slimmer bezel and a dark, large base that houses its components.

Acer has installed a 27in ten-point Full HD touchscreen in this machine. The 1,920 x 1,080 resolution is large enough to handle work, but it does look a little stretched across the 27in diagonal - you don't have to look too closely to see pixelation thanks to the poor 82ppi density level.

Still, that's not an issue that will be a problem in day-to-day use, and the matte finish makes it easier to use this screen beneath bright office lights. The touchscreen functions well, too - it's responsive and accurate.

The best aspect of this screen is its contrast. The brightness level of 289cd/m2 is ample for office lights, and the black level of 0.09cd/m2 is excellent. Those combine for a top-notch contrast ratio of 3,211:1. It's a superb result, and it means that you'll get good vibrancy, punchy colours and inky, deep dark shades.

Its average Delta E of 2.8 is middling, and the colour temperature of 6,945K is a little too cool. The uniformity is only mediocre, too - the backlight lost nearly 20% of its strength in its bottom- and top-left corners. The screen also only covered 85.6% of the sRGB colour gamut. 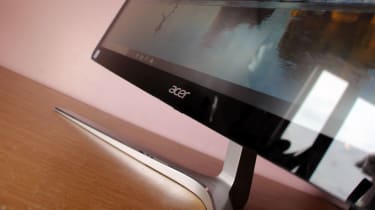 The screen doesn't have the colour accuracy for precise photo work, but it does have the punch and contrast for the vast majority of tasks. If you're handling Office tasks, browsing the web or handling basic photo applications, you'll be fine.

The speakers are good, too. The subwoofer provides plenty of punch, and the pair of normal speakers serve up good clarity and balance. For music and movies, they're easily good enough.

Unfortunately once you get behind the screen and beyond the good looks, the U27 begins to struggle. For starters, the processor is poor. The Core i7-7500U is built using last year's technology, and it's a low-power laptop part - so that means you only two Hyper-Threaded cores with a stock speed of 2.7GHz. It reaches a Turbo peak of 3.5GHz, and has 4MB of cache.

That specification doesn't compare well to the newer Kaby Lake Refresh hardware that will appear in an increasing number of all-in-one machines. The Acer Aspire S24 served up a Core i5-8250U processor with four Hyper-Threaded cores, 6MB of cache, a 1.6GHz stock speed - but an impressive Turbo peak of 3.4GHz. It also has a newer, more efficient architecture - and Kaby Lake Refresh parts with Core i7 branding will be even better.

The rest of the internals hardly set the world alight. There's 8GB of memory, but it runs at a slow 2,400MHz and it's installed in single-channel mode, which will have a bit impact on speed. There's no SSD, either - just a 2TB hard disk.

It's a recipe for disappointing performance. The Acer's overall benchmark score of 57 pales in comparison to the Kaby Lake Refresh chip inside the Acer Aspire S24 - that machine was thirty points better. 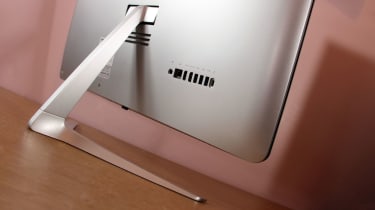 More benchmarks illustrated the gulf between last year's silicon and newer hardware. The Acer U27 scored 3,798 and 7,339 in the Geekbench single- and multi-core tests - but the newer hardware inside the Acer S24 was a little quicker in the single-threaded test and nearly 4,000 points faster in the multi-threaded benchmark.

The Intel HD Graphics 620 chipset delivered a meagre average of 35.2fps in the Dirt Showdown benchmark, and its hard disk returned sequential read and write scores of 138MB/s and 129MB/s.

Those disappointing results make for a disjointed computing experience. Boot times are long, menus are sluggish to open, and you'll often be waiting for applications to start up[. It's a similar experience to the other Acer machine - which had a faster processor, but also omitted an SSD.

The older processor, single-channel memory and lack of an SSD also means that this PC can't run high-end work tools. If you buy the U27, you'll be restricted to web browsers, Office tools and other less-intensive applications.

In 2018, then, having solid-state storage is vital. The lack of an SSD makes the Acer U27 difficult and irritating to use - whereas the Lenovo ThinkCentre, which did have an SSD, was consistently snappy.

Thankfully, Acer sells several other versions of this machine. The 999 exc VAT version only has a 1TB hard disk and retains the single-channel memory, but it does have a newer Core i7-8550U processor - and a 16GB Intel Optane drive. 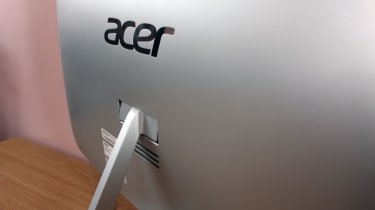 The 915 exc VAT model uses the same Core i5-8250U processor as the Acer Aspire S24. It doesn't have the Intel Optane drive, but it'll still be better than the model that we've reviewed here.

The Acer Aspire U27-880 looks good and has a screen with enough punch to handle web browsing and basic photo work - but hands-on time with the U27 reveals several key issues.

The processor doesn't have the cores or the speed to handle anything more than basic tasks, and the lack of an SSD robs this system of responsiveness.

Acer's other models do include better processors for lower prices, but they still don't have proper SSDs, and so they'll still only be suitable for basic office tasks rather than more demanding, workstation-level utilities.

If you want a large, bright all-in-one to handle those entry-level applications, then the U27 is a reasonable option. If you need a bit more power, look elsewhere.

Acer’s machine looks good, but a lack of power on the inside hampers its chances