Looking back, my 3D-printing dream was never a goer

In this increasingly cynical age, it's getting harder to buy into seductive visions of the future 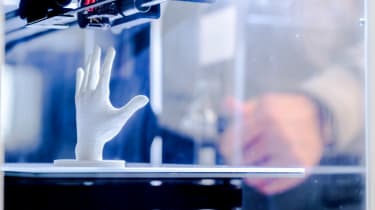 Recently I happened across one of those online "futurology" articles, describing the technological developments that were expected to shape the years to come. The interesting thing about this one was that it had been originally written in 2012, so I could see for myself how accurate the author's predictions had been.

Some were spot on Chinese smartphones and "Big Data" (the commodity, if not the phrase) have unarguably become part of our everyday reality. But one prediction stuck out as, shall we say, a little less prescient the idea that 3D printing would become a consumer commodity and rapidly upend the entire manufacturing industry.

It's amazing how completely the idea of 3D printing has dropped off the radar. Back in 2013, when I first started trialling the technology for this very publication, I found myself fielding endless questions about it, not just from techie colleagues, but from intrigued friends and family. The potential of those early extruders had clearly captured the public imagination, in a way that few innovations manage.

Yet those first-wave 3D printers always felt like proofs of concept. The ability to mould your own shapes out of molten plastic was all well and good, but almost from day one I found myself hankering for the promised next step a multi-material printer that could lay down both polymer and conductive metal-based materials. This would open the door to printing basic electronic circuits, and over time, as the technology got smarter and smaller, it would become possible to home-print ever more complex things, with memories and screens, for mere pence. It would be the maker movement on steroids in hyperspace. Yet somehow it never came to pass.

In retrospect, there are a few very obvious reasons for that. For one, molten polymer is hazardous stuff. The 3D printers I tested came festooned with warning stickers; one included an industrial-grade pair of heatproof gloves in the box. Adding molten metal into the mix isn't exactly going to make things safer.

And it's not as if you only have to worry about human error. My tests were repeatedly disrupted by models collapsing halfway through the extrusion process, or by bits sticking together, causing the model to become more and more deformed as layers piled up in the wrong places. It proved very possible for a model to topple off the platform without any external intervention.

Even if the thing does come out looking like it should, how do you know it's perfect on the inside? The dream is to hook up our freshly-printed creations to a power supply and watch them spring to life. But the tiniest glitch in an internal electrical pathway could result in a short circuit, a runaway heat build-up, and ultimately a pile of cinders where your house once stood.

Not discouraged yet? All right, let's imagine that the technology has moved on a few generations, and that 3D printers can be relied upon to produce perfectly rendered reproductions of our digital designs. How do you know that those designs are themselves electrically safe? I know I'm nowhere near qualified to design anything more complex than a light switch, and even then I wouldn't dare to wire it up, just in case.

And if you're thinking you'll get your designs off the internet, as we do with today's static 3D models, that's even worse. You're putting your trust in a stranger with unknown credentials and zero liability. Perhaps they'll be merely incompetent; perhaps they're distributing designs that are malicious.

There's only one way I can see domestic 3D printing working and it involves electrical component manufacturers creating their own certified 3D printers, with known tolerances and fault-handling measures and restricting them to printing their own, fully tested and cryptographically-signed designs. Needless to say, I very much doubt we'd be allowed to print out those designs for the bare cost of the raw materials. In fact, I'd expect to see a "print at home" surcharge, to capitalise on the convenience of not having to put on your shoes and go out to the shop, or wait 18 hours for Amazon to bring the desired item to your door.

So much for the revolution.

It's now obvious that our hopes for 3D printing were never realistic. To put them into context, just look around at how else our perspectives have changed since 2012. We now know that our private activities are spied upon, our smart-home devices are hacked and democracy itself is subverted. Not being able to turn out our own transistors is the least of our worries.

Perhaps all of this has made us more wary of new technology. If I were responsible for regulating mass-market consumer technology, I'd have to say that my own erstwhile vision of a 3D-printing revolution throws up a lot of red flags.

And maybe that's for the best. At some point, 3D-printing technology really will mature to the point where it can change the world for the better. The bigger question is whether humanity will be mature enough to handle it.