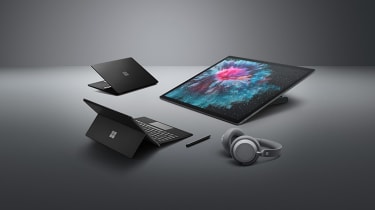 Microsoft has unveiled an update to its flagship range of Surface devices, with a new Surface Pro, Surface Laptop and Surface Studio.

After ditching the numerical designation with last year's Surface Pro, Microsoft has brought it back again with the new Surface Pro 6. The new device is little more than a hardware refresh - it now features a speedier 8th-gen Intel processor and a new matte-black colour option. Aside from that, it's effectively the same device as last year's Surface Pro.

The only other difference is that the Surface Pro 6 starts with a Core i5 and 8GB of RAM as the base option, while the bottom-tier Core m3 4GB RAM configuration has been axed. Microsoft is presumably intending for the recently-released Surface Go to fill the slot the m3 Surface Pro previously occupied.

The Surface Laptop also got a successor, in the form of the Surface Laptop 2. As with the Pro 6, the changes here are largely cosmetic; it's using a Coffee Lake chip rather than Kaby Lake, there's no 4GB configuration any more, and it now comes in black.

Apart from the new colour option, the physical design of both devices remains unchanged - which means no USB-C ports. Fans have decried the omission, which is something that IT Pro criticised when we reviewed the devices' predecessors.

Microsoft also unveiled a successor to the Surface Studio, Microsoft's monster all-in-one for creatives. However, while Microsoft claims that it's the 'fastest Surface ever', the new device uses a last-generation Kaby Lake chip - a Core i7-7820HQ, to be precise, with four cores and a 2.9GHz base clock speed.

It also claims up to 50% faster graphics performance, with two new GPU options in the form of an Nvidia GTX 1060 or 1070, with 6GB and 8GB of graphics memory respectively. The screen itself has also seen an upgrade, with almost 40% greater brightness and an improved contrast ratio.

UK customers can pick up the Surface Pro 6 and Surface Laptop 2 starting from 16 October, with the Surface Studio 2 arriving at some point in 2019. The Surface Pro 6 starts from 879 for the entry-level Core i5 model and maxes out with the 1TB, Core i7 configuration for 2,149, while the second-generation Surface Laptop starts at 979 for the i5 variant and goes all the way up to 2,529 for the top-spec i7 version. The Studio 2, meanwhile, retails for a whopping $3,500 starting price, and is likely to cost a similar amount in the UK.