Tiny, quiet and simple, the M15w would be perfect if it wasn’t so expensive to run 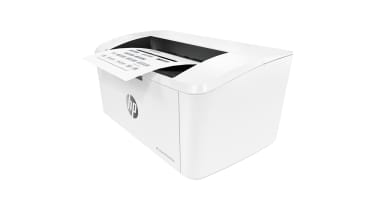 Not everyone needs bells and whistles. HP's LaserJet Pro M15w is a very compact, single-function printer focused on delivering mono text and graphics. There's no scanner or fax modem, and you won't need to clear an entire desktop to find somewhere to put it. Rated at only 18ppm and with no automatic duplexing it won't break any productivity records, but with Wi-Fi support it could be an unobtrusive and easy companion in a small home office.

With no control panel, connecting the M15w to a wireless network is a choice of using Wi-Fi Protected Setup (WPS), or letting HP's install program configure it over a USB cable. We chose the latter, but subsequently couldn't print to it - even though HP's Device Toolbox software could communicate with it. Reinstalling cured the issue.

A simple printer, the M15w's driver is similarly low on frills. All the basics are there, but the one option on the Advanced tab is to reverse the print order. We like the simplicity: most users just want to print with no frills. Send a print job and the M15w immediately impresses with very quiet, clunk-free printing, again making it easy to live with. We measured a peak power use of 846 Watts - low for a laser - while standby power was just 2W.

Given this printer's modest specifications, we were happy with our results. A first page arrived in nine seconds, after which black text appeared at 17.6ppm and complex graphics at a relaxed 8.9ppm. Two 10 x 8in photos took 48 seconds, while the printer needed a minute to print six 6 x 4in photos onto three A4 pages. Text was as excellent as we'd expect. Mono graphics were generally good - typically for a cheap laser there was some very subtle banding - while photos appeared over-sharpened, but most users would neither notice nor care.

A great, basic printer, then, but there's a big 'but'. The M15w arrives with a startup cartridge fit for only 500 pages. More significantly, replacements are only rated at 1,000 pages, and at the time of our test they cost 38 each. The resulting 3.8p per page means that this excellent printer is only really suited to very occasional use, and as such it's hard to wholeheartedly recommend.

An excellent no-frills printer, this mono laser is small, cheap and quiet. The biggest downside is that low-capacity cartridges mean that running costs are high.

Choose the right colour printer for your business