Laptop designers have run off the tracks, and Intel has pushed them there 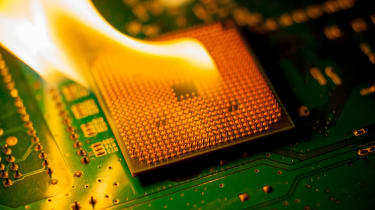 When news broke that the latest shiny Intel processors in the new MacBook Pros were getting all flustered, overheating and slowing right down, we shouldn't have been surprised.

No matter how you slice and dice it, heat is the absolute bane of any CPU designer, and thus anyone who puts them into mobile phones, laptops, tablets and other devices. Remember the good old days when laptops were thick and heavy? And had significant ventilation slots on the sides and bottom to allow the heat to dissipate away? Those with long memories will recall how a laptop could get too hot to stay on your lap, especially if you were wearing shorts.

Of course, this heat comes from somewhere, and it's the micro nuclear furnace that runs within the CPU chip itself. This puts out heat in quantities directly related to a number of factors: the voltage rail in use on the CPU, the clock speed of the CPU and the manufacturing size of the chipset tracks. Higher voltage tends to lead to higher power dissipation (V=IR for those who remember schoolbook physics). Run the clock faster, and the CPU does more work, which equals more heat. Smaller tracks mean components closer together, which means less resistance - which means lower heat output.

CPUs have been getting better over the years. I well remember the thermal impact of adding a second Pentium Pro to a desktop motherboard some 20 years ago. Back then, each core ran at constant speed and on a high voltage rail. Today, we have multi-core CPUs, and it's possible to vary the driving parameters such as voltage and frequency on each core in real-time. If the computer gets busy, you can ramp up the CPU voltage and clock speed. If it's idling, then pull back on them. If you only need two cores out of the four to do some work, only increase those, for the fraction of a second necessary to complete the thread.

So what happened with the MacBook Pro? It was a perfect storm - Apple replaced the quad-core i7 CPU with a six-core i9. That's 50% more number-crunching, which makes a power-hungry user such as myself positively tremble at the thought. Allowing an increase from 16 to 32GB of RAM means I can throw bigger and better workloads at the CPU.

Bigger SSD options means that I can store more of this stuff, for instant load and compute. Now only an idiot would expect that all of this would be possible with exactly the same thermal architecture as used by the older design. Intel has been slow to decrease its die size, and is still playing a long and painful game of power management catch-up alongside its rival ARM. Could you really envisage a smartphone running an i7 or i9 CPU today? Even if it did, how long would the battery last?

No, the problem is that laptop designers have run off the tracks, and Intel has pushed them there. Everyone wants a light, slim, portable laptop. Even better if the screen detaches and it turns into a tablet, just like the Surface Book. We want something not much bigger than a pad of A4 paper to have four, or now six, CPU cores of number-crunching alongside a superfast GPU for graphics operation.

Oh, and it has to be silent because it doesn't need fans, and last for at least ten hours because... well, why not?

As you could have predicted, this particular bubble has finally burst. It's just like Wile E Coyote running off the cliff and keeping going right up to the point where he looks down. Road Runner, apparently, could just keep going.

It has been argued that Intel has fallen behind the curve here. It promised a more rapid development process, which it has failed to deliver. This is the outcome of that. What to do about it? Well, I confess I was particularly thrilled at the thought of the new MacBook Pro because, although my four-year-old 13in example is still doing sterling service, the 16GB RAM and 512GB of storage is a little cramped at times. Moving to 32GB and 2TB would be very useful indeed. The six-core i9 processor was the icing on the cake.

However, I waited to see what the initial reports said, and lo and behold the i9 shut down under heavy load. This somewhat dulled my initial enthusiasm for spending a few thousand hard-earned pounds on a new laptop.

Apple has apologised and brought out a fix that seems to solve some of the issues, which is a good start. But let's not forget that this is just the latest bump in the road in the relationship between Intel and Apple; maybe the rumours of Apple producing its own high-performance CPU for desktop and laptop use are really going to come true.

What's certain is that the current road has already led us off the cliff. And like Wile E Coyote found, the ground is a long way down.