The AMD Ryzen Pro chip underwhelms on speed, but this small PC could serve well for general office work 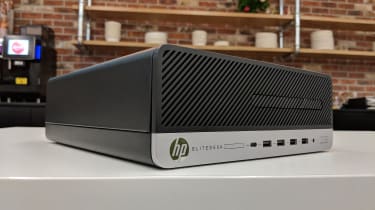 Ryzen Pro, AMD's vPro-bothering family of business-minded processors, found its way into a relatively exclusive club of laptops and desktops last year. HP was one of just two manufacturers (along with Lenovo) to equip their offerings with the full range of Ryzen 3, 5 and 7 Pro chips at launch, and this EliteDesk 705 G4 sits roughly in the middle of the pack: a desktop that's flexible in its configuration options, yet still fairly affordable.

This is the 'SFF' (small form factor) version of the EliteDesk 705 G4, so it's pretty compact for a desktop. Rubber feet allow it to sit flat, potentially serving as a space-saving monitor base, but it also comes with a stand that props it upright in a mini-tower configuration. Just like the Dell Optiplex 5060, another undersized office system, there's no undue flashiness in the design: mostly black metal, with a grill-like plastic front panel.

It's practical, though, especially in how easily it can be opened up: just push a switch at the back and pull the large back/side panel (depending on how you've got it oriented) towards the front. This reveals a surprisingly varied range of upgrade possibilities: single PCI-E x16 and PCI-E x1 slots sit unused, so you could quickly add a graphics card or Wi-Fi module, provided they're half-height cards. Three of the four RAM slots also go spare. 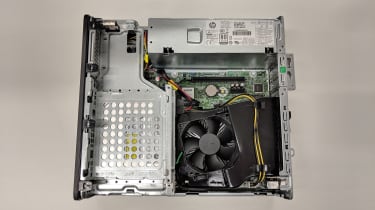 Be wary about storage, though. All EliteDesk 705 G4 models come with a 256GB NVMe SSD, which - while a great starting point - can't be helped with additional 2.5in or 3.5in drives. This is despite there being an empty space inside the internal chamber (next to where the slimline DVD R/W drive is mounted) that would be perfect for holding a hard disk or SSD.

Back on the outside, the grill front conceals a front-firing speaker. We're used to being underwhelmed by integrated speakers, but this one is remarkably poor - it's quiet even at high volume settings, and sounds dreadful. Even plain old human speech sounds gratingly hollow and electronic, so for remote meetings you'll need to use either the 3.5mm combo headset jack on the front or the line out jack on the back.

The adoption of Ryzen Pro CPUs hasn't changed HP's usual habit of offering a myriad of different hardware configurations. Our particular unit came with the mid-range Ryzen 5 Pro 2400G, a quad-core, eight-thread chip, plus 8GB of RAM. Unlike the old, consumer-grade Ryzen 5 1400, the 2400G includes integrated graphics in the form of Radeon Vega RX 11.

Oddly, this configuration did quite well in our 4K image and video editing tests, scoring 118 and 126 respectively, but then faltered in the multitasking portion with a score of 94. That works out to 109 overall, which is lower than we expected; multi-threaded workloads tend to be Ryzen's forte, but the similarly-priced Optiplex 5060 managed 156 overall with its hexa-core Intel Core i5-8500.

Dell's little PC also did much, much better in Geekbench 4. The EliteDesk's 3,891 in the single-core test and 10,986 in the multicore test sit well behind the Optiplex's respective 5,018 and 19,838. As such, it's hard to recommend the EliteDesk 705 G4 for anything tougher than basic 2D applications.

The inclusion of RX Vega 11 graphics has an economic benefit: unlike with most Ryzens, you don't also need to invest in a graphics card just to get working video output. Still, while we've seen Vega outperform Intel UHD Graphics in games, dedicated graphics will be superior to both for serious rendering and modelling work.

As mentioned, the single storage option is an M.2-mounted 256GB NVMe SSD. Using the AS SSD benchmark, we recorded a sequential read speed of 1,310.1MB/sec and a sequential write speed of 843.8MB/sec. That's not amazingly fast, knowing what NVMe is capable of, but still much faster than any SATA-based SSD, so we're not complaining too much. The only real potential issue is capacity: 256GB is fine for everyday documents, but if you deal with a lot of large media files, it will quickly run dry. 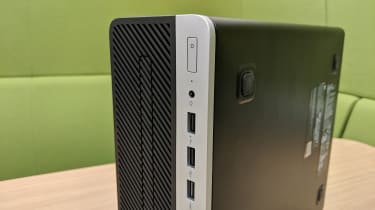 The Optiplex 5060 has a much larger mechanical hard disk, though even with its performance boosted by Intel Optane Memory, the EliteDesk's SSD is much quicker, whether copying files between folders or booting up Windows.

Connectivity is perhaps lacking truly standout features, but will be more than sufficient for most users. There's a healthy total of ten full-size USB ports between the front and back, with a single Type-C port on the front. Four of the former are faster USB 3.0s, and one of the front USB 2.0 ports supports fast charging for devices. You could potentially find a model with a functioning SD card slot too, though on our model it was covered up.

For display output, there are no HDMI connectors, but two DisplayPorts still enable multiple monitor setups, with a VGA output as backup. The only other port is a Gigabit Ethernet jack; Wi-Fi isn't built-in, but could be added cheaply via PCI-E.

Feature-wise, there are some nice little security bonuses that could complement in-house measures. For a start, the EliteDesk 705 G4 runs Windows 10 Pro, so comes with integrated tools for managing OS update rollouts, enhanced remote desktop support and Bitlocker drive encryption (although this, admittedly, hasn't had a good time as of late).

The Ryzen Pro CPU also includes AMD's GuardMI suite, which means the chip has the same transparent memory encryption system as AMD's EPYC data centre processors, can use its onboard security co-processor for secure booting and has a hardware-accelerated AES-128 encryption engine - among other features. It's a shame that raw performance is so middling, as this could have been a brilliant professional-grade CPU otherwise.

That said, for 463 excluding VAT, you're unlikely to find much that truly tears away speed-wise. The EliteDesk 705 G4 is hardly in denial about being anything more than a basic office desktop, and with its swift SSD and enterprise-focused security tools, it aims to fulfil this role with more than just the bare minimum.

It is, therefore, a decent little system despite its flaws, though paying extra for the Optiplex 5060 would be worth it if you need something with a bit more processing muscle.

This compact Ryzen Pro launch system isn’t the multitasking expert we were hoping for. However, its SSD drive provides some much-needed speed, and the CPU (together with Windows 10 Pro) at least comes with an impressive set of security capabilities. Stick to less intensive software, and it could yet prove an asset.