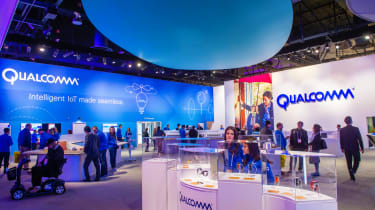 Ahead of Mobile World Congress 2019, Qualcomm has today announced the launch of its second-generation 5G modem chip, the Snapdragon X55.

The successor to the Snapdragon X50 released last year boasts download speeds capable of 7Gb/sec and 3Gb/sec for upload, although Qualcomm has said that this is achievable only on a perfect mmWave setup.

Unfortunately, we won't get to see devices with it installed until at least late 2019. Until then, 5G-enabled devices will get the Snapdragon X50 treatment. Despite the delay, Qualcomm predicts that 5G will be prevalently embedded in commercial devices faster than 4G was when it was launched.

The new 7-nanometre single-chip supports both standalone (SA) and non-standalone (NSA) network deployments: the former being full mmWave and the latter being shared spectrum between LTE and mmWave.

In NSA deployments, which are expected to be the first before SAs are completed, LTE will provide network capacity with mmWave providing speed.

Qualcomm said that the ability to facilitate 4G and 5G spectrum sharing will accelerate initial 5G deployments, allowing more sites to go up in shorter time as telcos will be able to merge existing 4G with new, faster 5G spectrum.

"Qualcomm Technologies is spearheading the first wave of 5G launches with our first generation 5G mobile platform," said Qualcomm president Cristiano Amon. "With significant evolution in capabilities and performance, our second generation commercial 5G modem is a true testament to the maturity and leadership of our 5G technology.

"We expect our 5G platform to accelerate 5G commercial momentum and power virtually all 5G launches in 2019 while significantly expanding the global 5G rollout footprint."

Qualcomm has also announced its intentions for a global rollout of 5G in 2019 instead of one single carrier 'winning' the 5G race.

Europe, North America and Japan are some of the regions expected to support Sub-6 spectrums and mmWave (NSA) on launch while other areas such as China, Australia and South East Asia will only receive Sub-6GHz on the rollout.

The X55 is the first modem to be announced which will support 100MHz envelope tracking technology and adaptive antenna tuning for 5G Sub-6GHz which is said to improve a mobile phone's battery life by up to two times.

The battery gets saved because usually, when a phone is in poor RF range, the chip tends to demand greater power from the battery in order to boost the signal - X55 stops this.

The modem will be launched alongside the chipmaker's new 5G mmWave antenna module, the QTM525. Around three to four of these will feature inside of the new generation of 5G-enabled mobile phones set to be announced in the next few weeks to avoid hands and heads blocking handset signals. Thanks to a reduction in the module's height, Qualcomm noted it could be fitted into smartphones with slim designs.

Qualcomm outlined some exciting use cases that it envisions for the X55. It believes the modem chip, once the full SA spectrum is established, will be able to facilitate 8K, 60 FPS VR video streaming.

Also, professional video editing with split processing between cloud and local hardware will be a reality, as will multi-person international video chats with real-time voice translation and voice synthesis.

The latter will be made possible by facial mapping technology which can interact with translation tools to produce real-time video of people speaking in another language. For example, a Chinese speaker could appear on an English receiver's screen speaking English with accurate mouth movements, despite speaking Chinese into the screen/webcam.

Qualcomm said at a press briefing that unlike the X50, the X55 chips will be built on a bespoke platform-by-platform basis.

The X50 was specifically designed with smartphones in mind whereas the X55 is expected to feature in a broader range of devices and will be designed to perform well in each one - you won't see the same chip in a smartphone as you would a new Volkswagen.