Cosmo Smartphone hands-on review: A mini-laptop disguised as a smartphone

It's a foldable phone, but not as you know it... 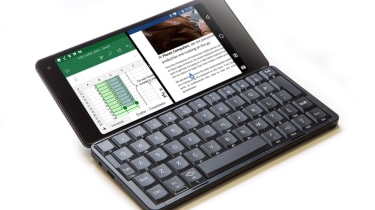 Despite living in an age of foldable touchscreen smartphones, there is still a large number of people happy with physical keyboards.

These are the function-first people and they don't see the point in an 8in screen if they can't finish a document on the go. These are the types of people most likely to still have a BlackBerry.

Now, smartphones with physical keys occupy a very niche part of the market, where they're living in the shadow of the edge-to-edge display giants. But might that change if a new contender came on the scene with a mix of both?

The answer is most definitely no; nothing is likely to replace slick, button-free phones any time soon. But, there's still that little corner of the market that want a more traditional device and this is where Planet Computer's Cosmo smartphone might have an impact. It's an update of the Gemini PDA, but with more smartphone-like upgrades. Is this the best mix of feature-phone and smartphone, or a gimmick laptop pretending to be a phone?

Much like the debate over whether a Jaffa Cake is, in fact, a cake or a biscuit, the Cosmo falls between a smartphone (which it's marketed as) and a tiny laptop, which it clearly looks like. But Planet Computers describes it as a multifunctional device, able to be both a phone and a computer. 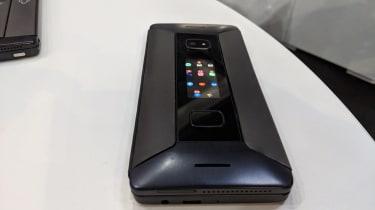 To describe it best, it's a foldable smartphone in a clamshell laptop design; when opened it looks like a mini-laptop horizontally and foldable smartphone when held vertically. The screen is nice and big, but it's not an edge-to-edge display as there are some chunky bezels at the top and the bottom. But there's still plenty of space on the screen for content.

When closed, there's an external screen, where the device can be more of a phone and users can see and receive calls and text messages. This is where the Cosmo differs from its previous incarnation, the Gemini, which didn't have either an external screen or a camera. And it's these additions that really allow it to be marketed as a smartphone.

However, it's admittedly a bit too heavy to be a smartphone, not exactly easy to hold in one hand and about 300g in weight. But, if it works as the creators want it to, you'll not need either phone or laptop in your bag. So, it could potentially be the device that saves your back.

On the outside, the aforementioned 1.9in touchscreen display is okay, suitable for reading messages and seeing incoming calls. It's the same idea as Samsung has had with the Galaxy Fold, but not as well executed. 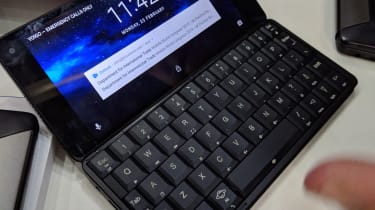 Open this up, however, and there's a rather nice 6in FHD+ touchscreen with an 18:9 aspect ratio. It doesn't appear to be top-end quality, but it is nice enough.

Cosmo's target market isn't really users who want to binge watch Netflix, so it doesn't need to have the top visual specs, but it still can give that type of content a good go. This is a device with clear functional and practical use, designed for doing work on the go and for that, this screen is just fine.

Here is our favourite bit; the fully backlit keyboard. It's a little special as it houses full-size keys, as did the Gemini. Anyone with a BlackBerry Key2 (or any phone with physical keys) will tell you that they're impossible to type on for long periods because there's so small.

The Cosmo, on the other hand, is quite delightful. The keys have a nice travel to them: they're quick, responsive, and deliver a satisfying clicky sound. But we have to say because of its size, or possibly because of the size of our hands, it's still quite difficult to type at speed.

The Cosmo runs on the Mediatek Helio P70 processor, which is an Arm octa-core CPU - a far cry from the high-performance Qualcomm Snapdragon chips used in other devices. It does, however, have 6GB RAM and 128GB flash storage, which is a healthy capacity. There's the option of expanding that via a microSD slot too. Power comes through a 4,220mAh battery, which, to put in perspective, is just a smidgen short of the battery size of the recently revealed Galaxy Fold. So, it's impressive. 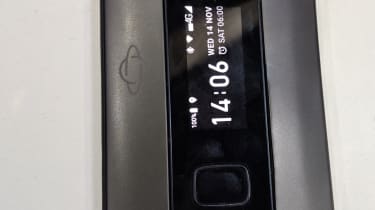 Elsewhere, there are two USB-C ports, for charging and connecting the device, a 24MP rear camera and a 5MP camera housed in the display. However, the best feature comes in the shape of a fingerprint sensor on the external display. This not only unlocks the device but doubles as a sort of trackpad and answer button. It's very responsive too, with a relatively easy click motion.

The Cosmo has a specific, niche appeal and as such, it can only really be judged on that. Most consumers are unlikely to choose a smartphone attached to a keyboard over an iPhone Xs, or Galaxy S10, or OnePlus 6T. If you can afford the Galaxy Fold or Mate X then there's a better chance they're the type of hybrid devices that will appeal to you. But, if you're the feature phone user or one of the many that are still sticking with BlackBerry, this may well be a better option.

But is it really a smartphone? It has the capabilities, sure, but it's the keyboard and the horizontal usage that underpin its laptop-like qualities. Great for editing Excel spreadsheets remotely, or tweaking documents on the train. But you're going to look strange making phone calls with this cumbersome device next to your face, so you'll need to be comfortable with function over form when it comes to the Cosmo.

An improvement of an innovative idea, but ultimately it's a tiny laptop disguised a smartphone