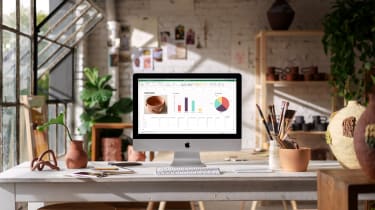 Apple has beefed up its range of iMacs with Intel's latest 9th-gen processors and improved AMD Vega graphics, which the company says will offer up to 2.4 times the performance.

Both the 21.5in and 27in desktop iMac models have received internal hardware refreshes for the first time since 2017, although the chassis has not been redesigned. The smaller machine has been upgraded to feature 8th-gen Intel quad-core processors, as well as six-core chips for the first time on an iMac.

The larger 27in device, however, has been even more drastically overhauled, with cutting edge 9th-gen processors featuring not only six-core i5 options but also an eight-core i9 variant. Apple claims that the 21.5in and 27in iMacs will offer 60% and 240% better speeds, respectively.

Elsewhere, not much has changed - both devices appear to be using the same display, and they look visually identical to their predecessors, as is common with Apple's mid-generation updates.

Apple hasn't raised the base prices of the two iMacs either; they still start from 1,249 and 1,749 respectively (excluding the non-retina 21.5in model), but be warned - as with all Apple's hardware, the fully tricked-out version will take a serious chunk out of your budget. 4,904, to be exact, which buys you the top configuration of the 27in iMac, including a six-core, 9th-gen Core i9 but excluding software and peripherals.

The goal, it seems, is to try and bridge the gulf between Apple's professional-grade iMac range and its enterprise-level iMac Pro, which is as expensive as it is powerful. The new hardware should offer noticeable performance improvements that ensure the iMac range is still competitive enough to remain an attractive option for creative businesses.

The gap between the iMac and iMac Pro ranges may have widened in spite of these efforts, however, as today Apple also quietly introduced new configuration options to the iMac Pro. These include a new 256GB RAM allocation costing 4,680 on top of the base price, and a Radeon Pro Vega 64X GPU for 630. These new options push the price of a fully-equipped, top-spec iMac Pro to more than 14,500 - an expensive proposition for even the most cash-rich of businesses.

These unexpected announcements follow yesterday's surprise launch of brand new iPad Air and iPad Mini devices for the first time in more than three years. Both launches precede a scheduled Apple event on Monday, which is widely expected to focus on the company's long-rumoured streaming service with which it hopes to challenge the likes of Netflix.