Can this affordable all-in-one deliver enough quality to succeed in your office? 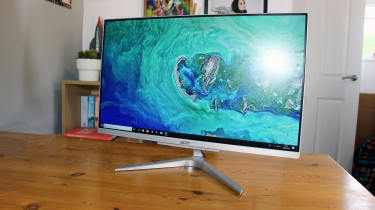 The latest machine from Acer is a mid-range all-in-one that can allegedly tackle day-to-day work tasks while looking good and saving space.

The price of 499 exc VAT is impressively low, too, although it does leave us wondering if certain areas have been compromised in order to bring this machine in under budget.

The Aspire C24 doesn't look like it costs so little. It's made from plastic, but the material has an attractive metal-effect finish, with a subtle brushed metal pattern used at the bottom of the screen and on the rear. There's a smart Acer logo at the bottom alongside an inset piece of plastic that holds the power button, and the 24in screen sits on top of a smart, subtle stand.

The screen's bezels are impressively slim, and most of the panel is very slim - just 12mm from front to back at its thinnest point. The bottom of the screen is chunkier, because that's where the components are stored, but it's still just 40mm thick - and the whole machine is a reasonable 200mm from front-to-back when the base is included.

The C24 looks good, and it feels sturdy. There's only a tiny bit of give in the plastic at the back of the machine, and the screen doesn't wobble much thanks to the solid base.

The entire unit only ways 4.3kg, too, so it's hardly hefty, and you get forward and backward tilting - but no other adjustment. There's also no easy way to gain any internal access to the Acer's components.

Nevertheless, it's a good start for a 500 machine, and the C24 looks competitive alongside more expensive rivals. In the past we've seen the Acer Aspire U27-880, which cost more than 1,000 exc VAT but was chunkier, with wide screen bezels and flimsier build quality. The C24 is also far subtler and smarter than the Acer Aspire S24, which stood out with brushed, bronzed metal. Understandably, however, it can't hold a candle to Apple's iMac, which has a stronger, sleeker design but, at its cheapest, costs 874 exc VAT. 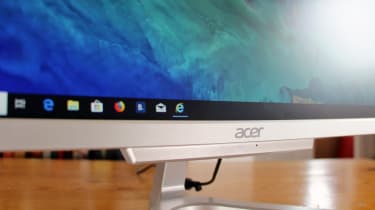 The front of the C24 is pleasingly minimal, with the hardware and connectivity shunted to the back of the screen. Two USB 3 ports and an SD card reader sit on top of the component block, facing upwards - handy for easier access. The rest of the ports point out from the back of the machine, and include two USB 2 connectors, an HDMI output, a single audio jack and a Gigabit Ethernet port.

That's fine for a keyboard, mouse and a couple of other peripherals, but the port selection is hardly overflowing. You don't get the faster USB 3.1 protocol, for instance, and DisplayPort, USB Type-C and Thunderbolt are all also absent.

The 24in panel has a Full HD resolution and uses IPS technology, and quality levels are good considering the price of this machine.

The panel's brightness level of 261cd/m2 is just enough to handle office lights, and the black level of 0.24cd/m2 is low enough to deliver inky, dark shades when required. The resulting contrast ratio of 1,088:1 is good, delivering consistent, impressive vibrancy and depth.

Those colours aren't bad at all, either. The temperature of 6,795K is close enough to the 6,500K ideal to avoid any distortion, and the Delta E of 2.73 is fine. Those figures are good, and ensure that colours look accurate on this screen. They're not quite accurate enough to handle photo-editing or design work, but this computer doesn't have the power for that anyway.

The Acer's panel displayed 87.1% of the sRGB colour gamut. That figure is average, and not good enough for photo work - but it's entirely adequate for web-browsing and office applications. Similarly, the panel's backlight uniformity was middling. The backlight lost up to 13% of its strength in the corners, which is mediocre - but not something you'll likely notice in entry-level office applications. 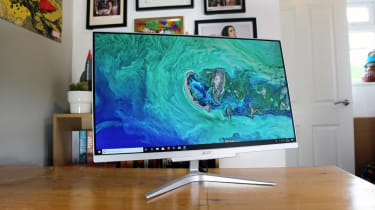 The Acer's screen offers good quality considering the machine's price. Colours are reasonably accurate and contrast is good, and uniformity isn't awful. This PC may not be powerful enough for colour-sensitive design work, but it's still going to make everything look good - whether it's presentations, browser windows or photo galleries.

Unfortunately, though, the speakers don't offer the same level of quality. They lack any noticeable bass, the high-end is extremely tinny, and the mid-range is muddy to the point of distraction. If you want any music in the office then we'd use a headset or some external speakers instead.

The Acer has a keen sense of design and a good screen, but when it comes to hardware the budget has clearly hampered the Acer's aspirations.

The Core i5-8250U processor is a modest, mainstream chip that uses the Kaby Lake architecture. It's a low-power part usually found in laptops - which means it's also suitable for slotting into the back of an all-in-one, where components can't generate much heat.

The i5-8250U has four Hyper-Threaded cores, which bodes well for general-purpose multi-tasking. It has a relatively modest base clock speed of 1.6GHz, but that uses Turbo boost to hit a more competitive peak of 3.4GHz.

The Core i5 has enough power to handle day-to-day computing, web browsing, Office applications and some light multi-tasking. It's not got the ability to tackle tougher tasks, though, like photo and video editing or content creation. Intensive database and design tools will struggle here, as will more demanding multi-tasking.

The Core i5 processor uses Intel's integrated graphics, and it's accompanied by 8GB of memory. That's a fine amount, but it runs at a middling 2,400MHz and it's only installed in a single-channel arrangement, which will hit performance. Connectivity extends to dual-band 802.11ac wireless Gigabit Ethernet and Bluetooth 4.2, and the Acer also includes TPM 2.0, but no Intel vPro. 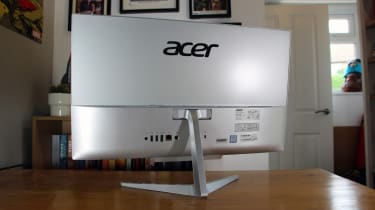 The biggest issue we have with the specification, though, is the storage. This Aspire C24 includes a 1TB, 5,400rpm hard disk - but no SSD. That rotational speed is slow, even by hard disk standards, and it won't be able to get near the pace offered even by cheap SSDs.

The Acer's score of 100 in the image-editing test is the best of our benchmarks - but that's because image editing depends on single-core speed. The C24's result of 70 in the video editing benchmark is mediocre, and indicates that the Aspire can't handle tough, multi-core applications.

The Acer scored a disappointing 40 in the multi-tasking test, and then returned an overall benchmark result of 60. That's about level with the Acer U27-880, which had much of the same internal specification. It also proves that this machine won't handle much more than low-end productivity tools and browser-based software.

The hard disk returned read and write times of 130MB/sec and 108MB/sec. That's actually slower than hard disks we've seen in previous Acer all-in-one machines, and it's many times slower than even affordable SATA SSDs - those drives will hit 500MB/s or beyond in the same tests.

The low-power processor and slow hard disk make for a frustrating experience. It takes a noticeably long time to boot the Acer, and the machine isn't much better when you arrive in Windows 10. Menus, windows and applications are slow to load, especially when you have more than one or two applications running. The machine is never hot or loud, but that's not much of a comfort when you're waiting for basic software to boot.

One word of advice: when the Acer arrived, it felt even slower until it was upgraded with Microsoft's latest Windows Feature Update. Applying the update helps the machine feel a little livelier, and it's free - but don't expect a transformative change.

Thankfully, Acer produces another C24 that comes with a Core i3 CPU and a 128GB SSD. You lose out on some CPU power with that version, but the SSD makes things feel far snappier - and the Core i3 is still entirely adequate for handling Office and browser-based tasks. 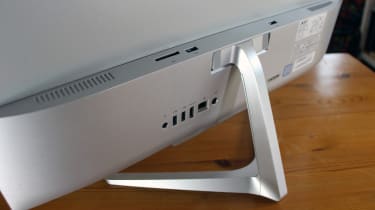 The Acer Aspire C24 looks good on the surface, but hands-on time with this PC reveals that compromises have been made - some more impactful than others.

The port selection could be better, for instance, but the absence of faster connectors or USB Type-C won't be felt in many environments - and the terrible speakers won't impact many offices, either.

The screen is good, and the Core i5 processor is a solid choice. However, the lack of an SSD is a problem - it makes the entire OS feel annoyingly sluggish, which means that every part of your work will suffer. It's extremely frustrating, and it makes it hard to recommend the Core i5 version of this machine despite its numerous good points.

If you do want an affordable all-in-one for modest office work, though, the Core i3 version will be a far better option - and it won't cost you any extra.

Acer’s C24 has good design and screen quality, but the Core i5 CPU is hampered by the absence of an SSD. Buy the Core i3 model instead – which does have solid-state storage.