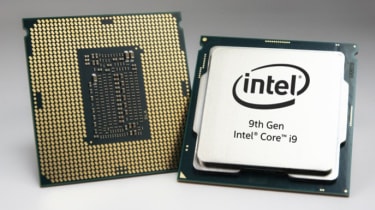 Intel has launched what it claims is the most powerful processor released to date, specifically designed for high-intensity gaming and creating on the go.

The company's ninth-generation H series processor will join the existing range of desktop processors and will be available in a raft of laptops produced by the likes of ASUS, Lenovo and Razer across a range of processor architectures.

Just like the i9-9900K processor revealed last year, the i9-9980HK offers up to 5GHz of power, on an eight-core chip with 16MB of Intel Smart Cache. Intel said it offers speed improvements of up to 33% compared with a 3-year-old PC, with 28% increased responsiveness.

For creators using 4K video editing, they should see a performance increase of around 54%, and integrated Intel Wi-Fi 6 (Gig+) makes data transfers even faster. The company claims 10GB multimedia files can be transferred in less than a minute if using an Intel-powered Wi-Fi 6 (Gig+) router.

The new chips also support Intel's Optane Memory modules, a new class of component that acts as a bridge between a machine's traditional memory, storage and processors to streamline the flow of data - essentially a bolt on to accelerate the performance of a system. 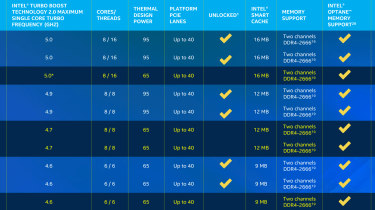 "Our new 9th Gen platform is designed to delight gamers, creators and performance users by giving them more of what they want," Fredrik Hamberger, general manager of the Premium and Gaming Laptop Segments at Intel.

"We are bringing desktop-caliber performance with up to 5 GHz and 8 cores in a range of thinner systems and new level of connectivity with Wi-Fi 6 (Gig+) so users can game or create where they want."

Intel has also revealed new additions to the 9th Gen Intel Core desktop processor family, with more than 25 product options, from the Intel Core i3 up to Intel Core i9.