Apple guns for the enterprise with monster new Mac Pro 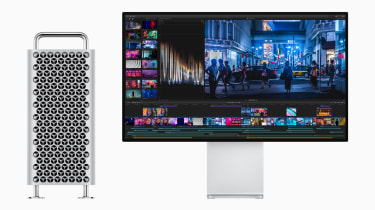 Apple has finally unveiled an updated version of its Mac Pro workstation, targeting enterprise users with a truly awe-inspiring list of specifications and a raft of business-class features.

The new machine, which was revealed at the company's WWDC conference in San Jose, is a modular system designed to allow components to be swapped in and out with ease. These are mounted to a stainless steel frame (with handles for easy carrying) and housed inside an aluminium chassis that detaches completely for 360-degree access to the interior components.

And what components they are; the new Mac Pro is powered by a range of Intel Xeon processors that go up to 28 cores and include 64 lanes of PCIe bandwidth, as well as 300W of power directly to the processor. That's backed by 12 DIMMs of six-channel memory for a whopping maximum capacity of 1.5TB (although that's only available with the 24- or 28-core CPU options). There's also eight PCIe expansion slots including four double-wide slots, three single-width slots and one half-length slot for fitting additional components. Storage is provided via SSD and goes from 256GB to a mammoth 4TB, although if Apple's previous record is anything to go by you can expect to pay an astronomical sum for higher storage allocations.

As you'd expect from a professional-grade workstation, the Mac Pro is well-equipped in the graphics department, too. The entry-level GPU option is the AMD Radeon Pro 580X, but the top-spec configuration comes with not one, but two of AMD's brand new Radeon Pro Vega II cards linked via fabric with a combined 64GB of HMB2 graphics memory, up to 28 teraflops of performance and 1TB/sec of memory bandwidth. 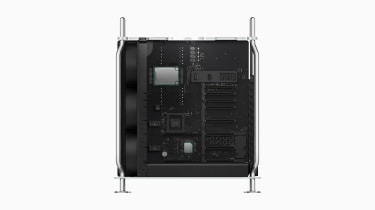 The graphics capabilities don't stop there, either; on top of this, Apple is launching its new Afterburner accelerator card with the Mac Pro, allowing videographers to stream native formats directly from their cameras into editing suites. This enables simultaneous real-time playback of up to three 8K ProRes RAW streams or 12 4K ProRes streams. And, at its maximum spec, the Mac Pro can support up to six 6K monitors to view them on.

The company boasts some serious performance boosts from all this hardware; Maxon's Cinema 4D software benefits from 20% faster rendering time than a Windows workstation with three top-end Nvidia Quadro RTX 8000 GPUs, while Avid's Pro Tools gets twice the amount of real-time DSP processing, as well as support for up to 6 HDX cards.

All of this hardware naturally requires a substantial amount of cooling and those duties are handled by three large front-mounted fans and an internal blower, as well as a lattice-patterned case to maximise airflow. Despite all of this, Apple claims that when under a desk, the new Mac Pro is only as loud as its iMac Pro all-in-one which was impressively quiet itself.

All of this meat means the Mac Pro is a weighty beast, with a starting weight of 18kg, so thankfully, there's also an option to mount it on castors and you can even get a specialised rack-mounted build for use in data centres.

Alongside the box itself, Apple has also launched an all-new professional-grade display called the Pro Display XDR, which stands for 'Extreme Dynamic Range'. It earns this moniker through some seriously impressive capabilities, including the ability to display 1,000 nits of full-screen brightness indefinitely (rising to a peak of 1,600 nits) with a contrast ratio of 1,000,000:1.

In more general terms, the new monitor features a 32in borderless LCD panel, with a resolution of 6,016 x 3,384 which Apple is calling Retina 6K. It supports the DCI-P3 wide colour gamut, as all Apple's panels do, as well as 10-bit colour. It also includes a matte-screen option, but while most matte monitors achieve this through a reflective coating, Apple has created something it calls 'nano-texture' by microscopically etching the glass is order to diffuse incoming light and reduce glare without compromising on picture quality or contrast.

The Mac Pro has also introduced something that iMac fans have been crying out for for years, in the form of a more adjustable stand. Like Microsoft's Surface Studio, the Pro Stand features a counterbalanced hinge to make it easy to adjust. Users can change the screen's height, angle and even orientation to work in portrait mode for editing websites or large codebases. The stand is also detachable from the monitor itself, allowing for easy transportation or attachment to a specialised VESA mounting kit.

As with all of Apple's kit, however, the elephant in the room is the pricing. The company's equipment especially anything aimed at a professional audience - is always pricey, and the Mac Pro is no exception. Available in the Autumn, the machine itself starts at $5,999 for the entry-level configuration and it's not unreasonable to expect the fully kitted-out version to cost north of $10,000.

Even more gallingly, unlike Apple's iMac range, the monitor is not included here. The Pro Display XDR will start at $4,999 (or $5,999 if you want the matte version), with the Pro Stand and VESA Mount Adapter both sold separately, for $999 and $199 respectively. All told, to get an entry-level Mac Pro with monitor and stand, you're looking at spending just under $12,000 - and that's with a basic 8-core processor and 32GB of RAM.

UK pricing and availability has yet to be disclosed - but it's fair to say that this machine is likely to leave a substantial hole in your budget regardless.