AMD looks to be catching up with Intel in processor stakes 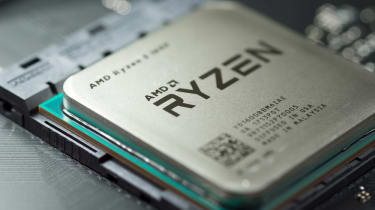 Microsoft and chip manufacturer AMD have worked together to improve Windows 10 performance on AMD hardware.

This is now a feature of the Windows 10 May update, which changes how the Windows scheduler tool works with AMD hardware. Previously the scheduler caused issues that impacted the performance of AMD Ryzen processors.

This is seen by some as a nod from Microsoft that Intel no longer dominates when it comes to PC hardware and gaming. AMD showed off slides that showed the PCMark 10 app launches 6% faster with the Windows 10 May 2019 Update, thanks to Ryzen optimisations, alongside a 15% improvement in the game Rocket League when played at 1080p.

The update should cut latency thanks to how process threads are handled by a single core, while also allowing Windows 10 to use a noticeable clock speed boost to bring improvements to a PC's performance.

There was further evidence to suggest AMD might be overtaking Intel in the computer chip stakes as a leaked test for it's AMD's Ryzen 9 3950X - a 16-core mainstream processor - suggested some impressive benchmark scores.

Discovered by known CPU leaker TUM_APISAK, according to TechRadar, the GeekBench scores were 5,868 for single core and 61,072 for multi-core. The chip is not due for launch until the autumn, and if the results are true, they compare very well against Intel products.

It is worth noting that the leak is unconfirmed and if true, the benchmarked AMD chip is possible an early engineering sample of the 3950X. But this is not news Intel engineer will want to hear - especially as its reportedly half the price of Intel's Core i9 chipset, which is priced at $1,189.