Inquiry will assess UK's efforts to create a circular economy 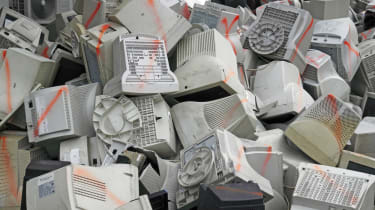 MPs on the Environmental Audit Committee (EAC) have launched an inquiry into rising levels of electronic waste (e-waste), which they say is amounting to a "tsunami" of wasted technology.

The chair of the EAC, Mary Creagh, announced on Thursday that the investigation will evaluate the UK's system of discarding old technology and assess current efforts to build a more circular economy.

However, it is a global problem, with 44.7 million tones of e-waste produced in 2017, 90% of which went to landfill, incinerated or illegally traded. Europe and the US account for almost half of this, with the EU predicted to produce 12 million tonnes by 2020.

Creagh called it a "tsunami of e-waste", saying that new phone launches, cheaper goods and built-in obsolescence have contributed to the growth of electronic waste in recent years.

"The UK produces more e-waste than the EU average," she said. "We are missing EU targets and are one of the worst offenders for exporting waste to developing countries, who are ill-equipped to dispose of it in a socially and environmentally responsible way.

"Our attitude to e-waste is unsustainable and the need for radical action clear. We will be investigating the UK's e-waste industry and looking at how we can create a circular economy for electronic goods."

It's said that there are now more devices connected to the internet than there are humans on the planet. This is predicted to continue, fuelled by rising consumer demand and decreasing costs.

In 2018, Greenpeace estimated that just 16% of e-waste was recycled responsibly. Reports also suggested that large tech companies like Apple were over-producing hardware that couldn't be recycled.

In 2016, the iPhone maker launched its wireless AirPods, however, according to Wired, the hardware has been designed in a way that makes it impossible to replace damaged or faulty batteries.