Loads of features and superb connectivity, but can image quality match up? 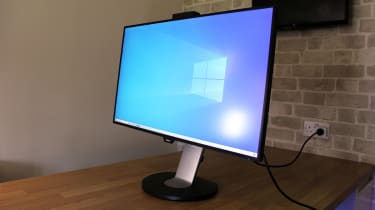 The Philips Brilliance 329P9H arrives with a price of 644 exc VAT - and, despite that figure, it's actually one of the more affordable high-work professional screens on the market.

Can it compete with rivals that cost more - or have too many corners been cut in order to bring this panel to market on a budget?

The Philips may sit at the more affordable end of the professional panel market, but there's still enough room in the budget for a good core specification.

It's an IPS screen, which will deliver good colour accuracy and viewing angles, and it has 10-bit colour - the same as every rival. It means this screen can render 1.07 billion colours rather than the 16.7 million shades that are produced on cheaper 8-bit panels.

The panel has a 32in diagonal and a 3,840 x 2,160 resolution, which means a density level of 140ppi. It's not the best available - 27in screens with 4K hit 163ppi - but it's easily crisp enough for demanding photo and video work. There's also factory calibration that Philips says delivers a sub-2.0 Delta E. 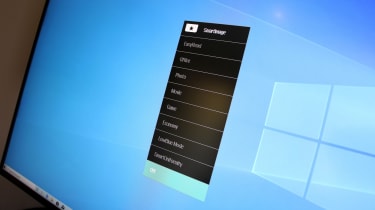 The Philips falls in between two key rivals. The Acer ProDesigner BM320 is cheaper, at 525 exc VAT, but it still delivers a 4K IPS panel with 10-bit colour. Step up a little and you could buy the 728 exc VAT BenQ DesignVue PD2720U. It's one of those 4K screens with a 27in diagonal, so it's sharper, and it uses 10-bit IPS hardware.

It's a good start, but the Philips' middling budget does mean it can't match other screens in some areas. It can display 100% of the sRGB gamut, but only a claimed 87% of the Adobe RGB gamut. If you work in Adobe's design applications, that could rule this panel out.

Both rivals offer more here. The Acer and BenQ screens both claim 100% Adobe RGB coverage. The Acer claims to cover virtually all of the broadcast-related Rec. 709 standard and the HDR-friendly DCI-P3 gamut, while BenQ claims 100% and 96% for these. Philips makes no claims about either.The Philips doesn't have any HDR compatibility, either. The cheaper Acer doesn't, but the pricier BenQ adheres to the HDR10 standard used on most TVs.

The Philips does cram in some extra, handy features. It has a sensor that can adjust the brightness depending on ambient light levels, and another mode uses the sensor to dim the screen once people have moved away from the panel.

These features work well and can save electricity, although they're admittedly best switched off if you're working on colour-sensitive work where consistent brightness is necessary.

The Philips has impressive physical versatility. You get 180mm of height adjustment, which is 30mm more than the Acer and the BenQ, and it also has conventional tilt and swivel options. It rotates into portrait mode, and it's compatible with 100mm VESA mounts. The round black base and metallic stand both look smart. The slim bezels make the Philips look sleek, and build quality is good. 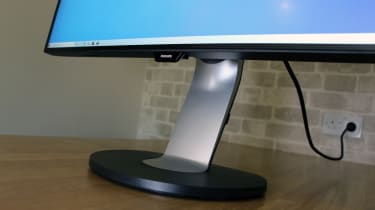 The port selection is excellent. There are four full-size USB 3.1 ports and a Type-C connector that supports DisplayPort and provides 65W of power. Display input is handled by two HDMI 2.0 ports and a single DisplayPort 1.2 connector, and a DisplayPort output allows the screen to be cloned on another panel.

A Windows Hello webcam pops out of the top bezel and there's even a Gigabit Ethernet port. It's one of the only monitors we've seen that can run all of your peripherals and your wired networking. The BenQ features USB-C Thunderbolt 3 ports, but the Acer doesn't - and neither has as many USB ports as the Philips, or any Ethernet port to speak of.

The only slight negative is the fact that the connectors are installed on the back of the screen. It would have been handier to have some USB connectivity on the side of the panel. The Philips has a smart, fast on-screen display, and it's navigated with a column of tactile, snappy buttons. It's mostly fine, but the power button is also in this column - so you may accidentally turn the screen off once or twice.

The Philips delivered decent initial benchmark results. Its average Delta E of 1.76 is excellent - below the point of 2.0 where most people can tell the difference. The maximum Delta E of 8.12 is disappointing, though, and it will mean some wayward tones. Its initial colour temperature of 6,853K is fine: a tad cool and a little wayward when compared to 6,500K, but acceptable. The initial Gamma figure of 2.13 is fine - a tad behind the Acer, but not problematic. These factory figures trade blows with the Acer and BenQ panels. That Delta E is better than both, but its colour temperature is worse.

The Philips' brightness level of 328cd/m2 is fine - ample for handling any sort of work under any sort of office lighting. However, it's a little short of Philips' quoted figure of 350cd/m2, and also slightly behind the 353cd/m2 of the BenQ. The black point of 0.24cd/m2 is good enough to render dark areas with depth, and it's better than both competitors. Those figures combine for a contrast measurement of 1,366:1. That's great - more than good enough for day-to-day work - and better than both competitors' factory figures. 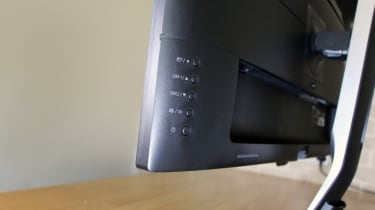 This solid performance means the Philips has better contrast and colour accuracy than its rivals out of the box. If you don't want to use different screen modes or make any adjustments, that's good.

Switching to the Philips' sRGB screen mode yielded the panel's best results. With this option selected the Delta E improved to 1.08 and the colour temperature hit 6,575K - barely any different from the 6,500K ideal. Contrast remained at 1,354:1. Its maximum Delta E remained a disappointing 8.05, though, and Gamma sat at 2.1 - a little poorer than in our initial tests, and more wayward than both rivals.

They're good results - and better than the Acer. In its alternative screen modes that panel delivered a Delta E of 1.26 and a 6,516K colour temperature, but only managed a contrast level of 549:1.

However, the BenQ is arguably better than both when its different screen modes are considered. In that panel's sRGB mode it delivered a fantastic average Delta E of 0.53 with a maximum of just 1.7 - and a colour temperature of 6,471K.

The BenQ's contrast ratio of 777:1 remains average, and lower than the Philips. That's still high enough for many work tasks, though, and photo-editing professionals will value the BenQ's noticeably better colour accuracy more than the Philips' deeper contrast. 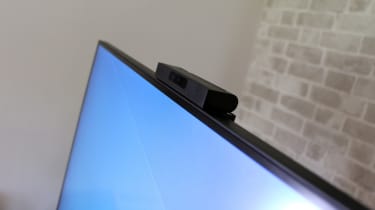 And then, finally, there's mediocre uniformity. On the left- and right-hand edges of the screen the backlight lost 15% of its strength, and the Delta E veered by 8% here. Using the screen at lower brightness levels will reduce the impact, but it's still a little too wayward for intensive colour work - and a little poorer than the Acer and miles behind the BenQ.

So, what can and can't be done with this screen? It's got good contrast and reasonable colour accuracy, and it does a solid job of covering the sRGB colour gamut - so for general photo-editing and video work, and mainstream office tasks, it's fine.

However, the lack of gamut coverage elsewhere, the disappointing uniformity and the high maximum Delta E all mean that the more consistent, more accurate BenQ is better for more demanding work. Its contrast is poorer, but not ruinously so, and it's better in every other department.

Elsewhere, the Philips has superb connectivity and adjustment - it's better here than either rival. So, it doesn't have the image quality or versatility for demanding work, but it has solid base performance and loads of features. It's ideal if you need a screen to tackle a multitude of mainstream tasks with loads of connectivity - but if you want something for pro-level image work, save a little more for that BenQ.

It’s got great versatility, connectivity and basic image quality, but the Philips can’t compete with rivals in proper professional tasks