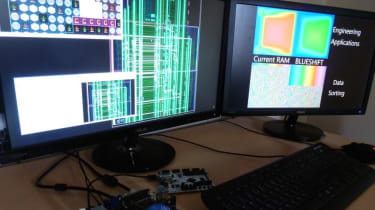 A Cambridge-based startup has created a prototype for a memory chip that it believes could make data transfers in computers 1,000 times faster.

Blueshift Memory says its prototype has a design that "reorganises" the way in which memory chips handle large scale operations where data transfers need to be rapid. The firm said the chip is structured to store data in readiness for these types of operation.

The specific problem the chip is aiming to solve is data tailbacks, which are sometimes referred to as a 'memory wall' or the von Neumann bottleneck. As central processing units (CPUs) have improved rapidly over the years, memory chips haven't developed at the same rate, creating a latency with data transfers. As a result, data gets clogged up in a slow-moving queue between the two.

This is often a problem for high-performance computers when running large operations, such as databases searches where the possible outcomes are in the millions. As the CPU fetches data from the memory, the tailback can reduce the speed at which even powerful computers can deliver results.

"Imagine if you are a taxi driver but the town where you work is always changing, people are constantly swapping houses, and the shops and services are forever disappearing and reappearing in different places," said Peter Marosan, CTO at Blueshift Memory. "That's similar to the way in which data is organised in existing chips.

"Our design is the equivalent of replacing that with a stable, structured town where you already know where everything is and can find it much more quickly. It makes everything faster, easier and more effective."

Although still a prototype, Blueshift claims its model has yielded impressive results. The company has built an FPGA card that emulates the chip's effects and it said that simulations using this suggested that the chip could make searches on Google as much as 1,000 times faster.

Blueshift said its design could also make it much easier to program some data operations because it would remove the need to include complex instructions about how to handle the vast quantities of data involved.

"It would make some big data programming as straightforward as the basic data searches that computing students learn to write in high school," Marosan added.