Incredible colour quality, features and pro-tier options – but you’ll have to pay for it 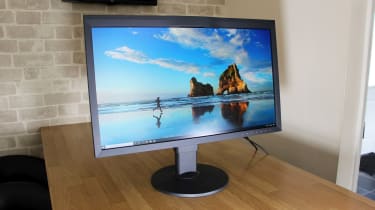 The Eizo ColorEdge CG279X is one of the most expensive monitors we've seen, but with good reason: it's designed for high-level photo, video and print professionals, which means it's got to deliver near-perfect colour accuracy, broad gamut abilities and loads of features.

Can a screen possibly justify that price, though, even for professionals? Let's find out.

The CG279X starts by nailing the fundamentals. It uses an IPS panel, which is the best option for colour accuracy, and it has 10-bit colour with automatic calibration and a 16-bit 3D LUT. Eizo claims that this screen nails 99% of the Adobe RGB gamut and 98% of the DCI-P3 gamut, with the former important for print work and the latter gaining in prominence thanks to the popularity of HDR.

Elsewhere, plenty of features will sate professional users. There are screen modes to handle those three gamuts, and the Eizo also has modes for the broadcast and cinema-friendly BT.2020 and BT.709 protocols. Safe area markers can indicate how much of the screen will be displayed on different devices. 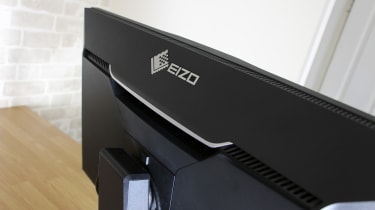 The ColorEdge has HLQ and PQ gamma curve options, with DCI and BT.2100 available for the former and BT.2100 available for the latter. These two curves are commonly used for displaying and editing HDR content, and they make HDR work viable on this screen even though it has quoted brightness and contrast figures of 350cd/m2 and 1,300:1. If you're a professional working with HDR content, though, we hope you've got relevant screens on-hand for real-world testing - because they can ascend to the 1,000cd/m2 levels that HDR requires.

The Eizo has a 27in diagonal with a 2,560 x 1,440 resolution, which means it has a density level of 109ppi. That resolution is a double-edged sword. For many work tasks, it's fine - there's enough real estate for photo and video work, and the density level is crisp enough. However, 4K screens deliver sharper images with more screen space, which would be more appealing in plenty of scenarios.

Whether the lesser resolution and sharpness will be a concern depends on your work. However, it's worth bearing in mind that Eizo has no ColorEdge screens which offer a 27in diagonal and a 4K resolution. If you do want a 4K Eizo, you'll have to step down to the 24in ColorEdge CG248-4K, which costs 1,568 exc VAT, or the CG319X, which has a 31.1in diagonal and a vast price of 3,324 exc VAT.

The CG279X's response time of 13ms isn't brilliant - it's fine for static work and most video, but fast-paced images will possibly suffer from ghosting.

We also must draw attention to this screen's warranty. It's a five-year deal, which is excellent - better than most other screens.

Eizo's screen requires no assembly. The solid versatility continues elsewhere: it has 155mm of height adjustment, 40 degrees of tilt movement and 344 degrees of swivel, and it pivots to portrait mode and supports 100mm VESA mounts. That's impressive - most screens don't include this much movement. 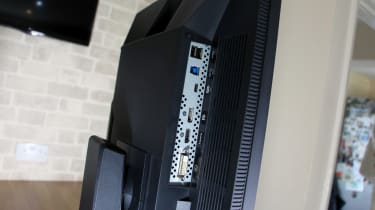 Build quality is good, with solid plastic throughout, and all movements are smooth. The aesthetic is nothing special, with dark grey plastic and no eye-catching design - even though Eizo says this monitor has relatively slim bezels, they're still chunky.

There's no cable management at the rear, and the stand is a slab of plastic. Happily, a handle is included at the back, although the 10.3kg weight is hefty for a 27in screen. None of this is a surprise though - Eizo's hardware is all about function rather than form.

The Eizo has a DisplayPort 1.3 connection, an HDMI 1.4 port and a DVI-D connector, and around the rear there are two USB 2 ports and a USB 3.1 Type-C port that supports DisplayPort and provides 15W of power. There are two more USB 3.1 Gen 1 ports, and they're helpfully positioned on the left-hand bezel.

The screen includes a shielding hood, but it doesn't include speakers or audio jacks. The inclusion of a DVI port is odd: most photo and video professionals will use HDMI and DisplayPort, and DVI is limited to 8-bit colour on this screen.

The on-screen display adheres to Eizo's function-first design ethos. It's navigated using a row of touch-sensitive pads, and it's excellent - fast and well-organised. It has options for switching between colour formats and modes, colour temperature, input range, gamma, saturation and more - every option you'd conceivably need.

The OSD displays current settings prominently, and it has options for easily switching between different gamuts. Different inputs and modes can be deactivated, and quick-access keys can be customised. It can be switched 90 to work in portrait mode, but it can't be moved elsewhere. It's not the best-looking, either, with plain graphics throughout. 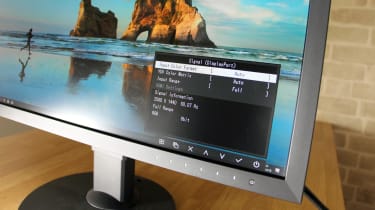 If you don't fancy the OSD, these options can also be accessed using Eizo's ColorNavigator tool. The added bonus of this Windows app is the ability for admins to manage multiple screens - a handy feature for larger businesses. The calibration options are good, too. The in-built calibrator extends from the top of the screen and doesn't get in the way, and calibrations can even be scheduled.

The Eizo, unsurprisingly, has spectacular quality. In its sRGB mode it delivered an average Delta E of 0.69, and in its Adobe RGB and DCI-P3 modes it returned Delta Es of 0.71 and 0.68. The screen's maximum Delta E never rose beyond 2.32, either.

It's a superb start. The human eye can't detect colour deviations when Delta E results dip below 2, and its averages were always well below this. Those averages were frequent, too - the maximum Delta E figures are still excellent, and they were rare outliers.

The Eizo continued to deliver great colour results. Its colour temperature sat at 6,501K in sRGB and Adobe RGB tests, and its gamma average in these tests sat very close to the ideal figure of 2.2. In the DCI-P3 benchmark the Eizo returned temperature and gamma figures of 6,308K and 2.55 - a little wayward, but not enough to cause concern.

When it comes to colour accuracy and temperature, the Eizo is outstanding. Its Delta E figures indicate virtually no detectable differences, and temperature and gamma figures are great. There are no gamut issues, with this screen handling nearly 100% of the Adobe RGB and DCI-P3 gamuts.

The Eizo has decent contrast, too. Its peak brightness level of 372cd/m2 is good, and a little higher than Eizo's quoted figures. The Eizo returned a black point of 0.36cd/m2, which is fine. Those figures combine for a measured contrast ratio of 1,033:1: ample for working in print, photography and most other situations, and just as good as anything else. 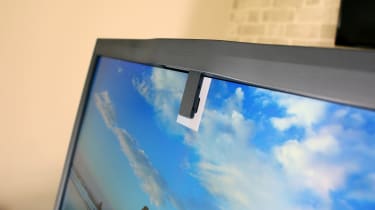 However, it doesn't quite match Eizo's quoted figure of 1,300:1. It's also not high enough to properly display HDR content, although the various screen modes mean editing and working with HDR content can be handled on this panel - and the Eizo was never going to manage that anyway.

Happily, the Eizo has excellent uniformity. Its brightness only deviated by 5% in its corners, with Delta E averages never changing by more than 2.08. And these figures were measured at maximum brightness, so those changes will be lessened by running the screen at more conventional brightness levels.

So, when it comes to performance, the Eizo is deeply impressive. Its colour accuracy and temperature is sensational, it handles all of the main colour gamuts, and its uniformity is fantastic. While the contrast ratio doesn't quite match Eizo's claims, it's still good, and still good enough for virtually every work task - and you'd have to spend a lot more to solve this screen's tiny contrast and HDR colour issues.

The Eizo has superb image quality, and it also impresses elsewhere. It's packed with features: it has virtually every setting required for print, photography and video, including HDR. It's got self-calibration, a huge number of OSD options, and decent connectivity and adjustment.

It's also not perfect. There could be better connectivity, that contrast could be a little higher, and some people may prefer a 4K screen for its improved space and sharpness.

If you don't need 4K but do need near-perfect colours alongside loads of features, then the Eizo ColorEdge CG279X is a superb option for creative professionals. It's expensive, though - so only think about this screen if you're serious about this panel's huge ability.

Exceptional colours, features and versatility make it ideal for creative professionals – although it’s not cheap, and some rivals have it beat on contrast