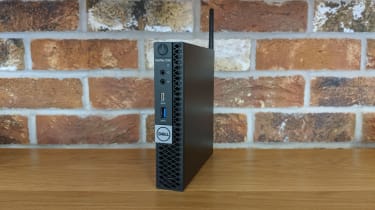 The Optiplex 7060 Micro is both the cheapest and most compact member of Dell's 7060 family, which also includes conventional tower and mini-tower form factors. Shrinking down to the size of a hardback book has forced a degree of lost capability, with there being fewer ports on this model as well as a lower-power Intel T-series chip, but the dimensions create opportunities as well.

Chiefly, this is a small enough PC to be VESA-mounted on the back of a monitor, to a wall or on the underside of a desk. Both businesses and individual users will appreciate this: it makes the Optiplex 7060 Micro harder to quickly remove and sneak off with, and it saves huge amounts of desk space compared to even the mini-tower version.

More generally, it's nice to get the full Windows 10 Pro experience from such a tiny machine, and at 182 x 36 x 178mm, it still takes up a negligible footprint even if it sits unsecured on a desktop.

It's extremely quiet, too. The only internal cooling component is a small blower-style CPU cooler, which vents hot air out the rear; under light loads, this is practically silent, and only rises to a mild hum when more intensive applications are in play.

Like one of its many predecessors, the Optiplex 5060, it's easy to open. Simply loosen the thumbscrew at the back, and the left side panel slides off, taking the front panel cover with it. Some parts are easier to add (or swap) than others - for example, the empty 2.5in tray is instantly accessible, but to add more SO-DIMM RAM sticks you'll need to remove the entire cooling system first. Still, the internal layout is as sensible as it could be for such a tightly-packed PC. 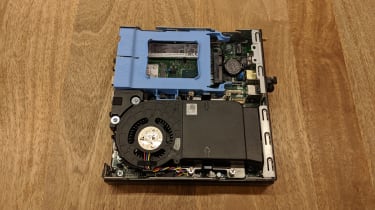 Behind the plastic front panel is a single forward-firing speaker, though as is so often the case with integrated speakers, it sounds too muddled for anything more audibly complex than a voice or video call.

Dell sent us the second-lowest spec for the Optiplex 7060 Micro, which comes equipped with an Intel Core i5-8500T, 8GB of DDR4 RAM and a 256GB SSD. We initially had high hopes for this CPU: it's a six-core chip, which normally means formidable multitasking potential, and we've seen from the Optiplex 5060 just how much performance can be squeezed out of a regular Core i5-8500. 8GB of RAM is enough for non-workstation desktop duties, too.

Unfortunately, the price of meeting the T-series' demands for lower power and heat proves steep: clock speeds drop from the standard Core i5-8500's 3GHz base and 4.1GHz boost speed to a 2.1GHz base and 3.5GHz boost.

Oddly, (not that we're complaining), the Optiplex 7060 Micro still comfortably competed with the Optiplex 5060 in our 4K benchmark suite's image editing test, with a respectable score of 117. In the more intensive video encoding and multitasking tests, however, it fell well behind, scoring 138 and 87 respectively. Its overall score of 109 marks it as a step back from the Optiplex 5060, the faster clock speeds of which secured it 156.

Geekbench 4 told a similar story, as the Optiplex 7060 Micro scored 4,143 in the single-core test and 15,344 in the multicore test - down from 5,018 and 19,383 on the Optiplex 5060. It's a shame, as these results would usually be considered decent enough for a sub-600 system - and it's true that you won't have problems with everyday applications like browsers and Microsoft Office. It's just unfortunate that a seemingly minor downgrade to a T-series chip can cut performance as much as it does.

However, whereas the cheaper Optiplex 5060 models only included a sluggish mechanical hard disk, the Optiplex 7060 Micro gets a speed boost with M.2 SATA SSDs as standard - even in this base model. 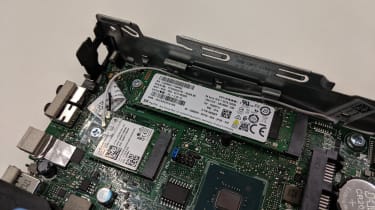 Some expectation-tempering might be in order here, as it's only a SATA drive rather than an even faster NVMe SSD, and capacity is just 256GB: not a lot at all when it's the only storage drive in the whole system. Still, it's pretty nippy: using AS SSD we measured a sequential read speed of 516.9MB/sec and a sequential write speed of 441.3MB/sec, the former in particular coming close to the very limits of how fast a SATA SSD can shift files around.

Windows booting and application start-up speeds are also much faster than you'd get from any hard disk, so productivity isn't hurt. If more capacity is needed, it's simple to add a 2.5in drive anyway, with the spare internal tray so readily accessible and the requisite SATA and power connectors being built into the motherboard rather than needing separate cables.

As we said, the dwindled dimensions have impacted external connectivity: the number of full-size USB ports on the front drops from four (on the two larger 7060 variants) to just one, a USB 3 port, on the Micro model. The SD card reader is gone as well.

Otherwise though, it's not so bad. That USB 3 port is joined by a USB Type-C connector, and just above that are separate mic and headphone 3.5mm jacks. On the rear, meanwhile, are an additional four USB 3 ports - enough for a couple of wired peripherals and external storage drives - and two DisplayPort outputs, allowing for dual displays. You also get a choice of using the Gigabit Ethernet port or connecting via integrated 802.11ac Wi-Fi; a single antenna socket is positioned on the rear, with the antenna itself packaged separately in the box. Bluetooth 5.0 is helpfully included too.

The only other port of note is a Kensington lock slot, though this does help make the 7060 Micro a better business PC - as does Dell's choice of Windows 10 Pro as the operating system, and the CPU being a vPro model. 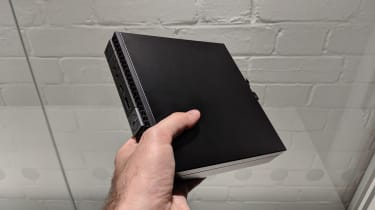 Less useful, or at least less usable, are the bundled peripherals. These are as cheap and nasty as freebie mice and keyboards can get: the mouse is uncomfortably proportioned and of such poor build quality that it rattles when shook, while the keyboard has mushy membrane switches and undersized keycaps.

For the inarguably low price of 549, however, it's easy to forgive a couple of unconvincing extras. In fact, considering the slick design, quiet operation and range of connectivity even with size-induced compromises, the whole thing is a pretty good deal.

Diminished performance and a small SSD are the only lingering concerns, but these don't have to be deal-breakers. The Core i5-8500T is just fine for general office work, and if the 256GB drive does get brimmed it's fast and inexpensive to upgrade with a secondary SSD.

Choosing this small-form-factor version of the Optiplex 7060 means lower performance and narrower connectivity, but both are fine for the price, and the Micro’s proficiency in other areas might surprise you.